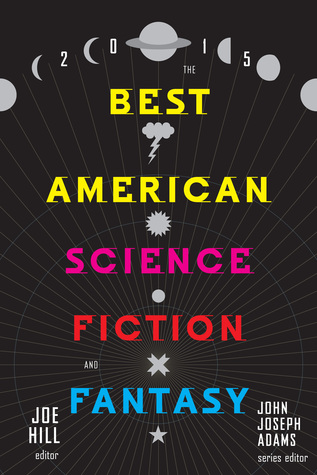 
An anthology of twenty short stories in the science fiction-fantasy genre. I gotta confess that I stopped after 13 stories. It was too depressing.

The foreword is interesting as Adams breaks down the history of science fiction/fantasy.

“How the Marquis Got His Coat Back” (London Below, The World of Neverwhere, 1.5)

Sofia Samatar’s “ How to Get Back to the Forest ” was disgusting. A nutjob girl believes there’s some kind of bug that’s put in you and that it has to be puked up.

Carmen Maria Machado’s “Help Me Follow My Sister into the Land of the Dead” was definitely creative with a gruesome ending.

Cat Rambo’s “Tortoiseshell Cats are Not Refundable” is well written and so depressing about grief and wanting the deceased back in their lives.

Karen Russell’s “The Bad Graft” is truly a horror of a sci-fi tale with plant life wanting to spread itself around. It was a curious read in terms of how the Joshua tree seedling(?) felt about the whole thing, but lord, this was depressing.

Alaya Dawn Johnson’s “A Guide to the Fruits of Hawai’i” is very creative about vampires who won the war and how they preserve their food. Another depressing story.

Seanan McGuire’s “Each to Each” is yet another creative tale that may appeal to women’s libbers who want freedom. It’s a case of mutation into a different species underwater. Not as depressing as the others.

Sofia Samatar’s “Ogres of East Africa” is science fiction with a heavy dose of fantasy in this listing of the different kinds of ogres who live in East Africa. Their appearance, fears, powers, regions preferred, and more.

Theodora Goss’ “Cimmeria: From the Journal of Imaginary Anthropology” was interesting if a bit confusing. Some college students invent a country with its own history, culture, mores, religion, etc., and are then surprised to discover its reality. Goss parallels our own world with its national and international politicking.

Jo Walton’s “Sleeper” finds a woman writing a book about a dead man who comes back to a sort of life in which he provides a simulation for the book that is intended to raise questions about the class system and why the English no longer have what they had.

I don’t know if I was influenced by all the depressing stories I read previous to this, but I found this one depressing too and somewhat confusing.

Neil Gaiman’s “How the Marquis Got His Coat Back” gives us the inside look on how the marquis gets out of his fix and saves a Raven lady from someone else’s fixation.

It takes place during Neverwhere, 1, which should be read before this.

Susan Palwick’s “Windows” is another well-written story that is so depressing, as a mother scrapes up the funds to visit her ne’er-do-well son in prison to wish him a happy birthday. She even has a video greeting from his sister who was lucky enough to win a place on a gen-ship.

Adam-Troy Castro’s “The Thing About Shapes to Come” is just plain weird when a mother has a cube-shaped baby instead of a proper-ball-shaped one.

Sam J. Miller’s “We are the Cloud” is too true, as this is a world which pays poor people to let them put a wire in their brain so the rich can have free wireless everywhere. There’s more in here about poor Case, his mother, the exploitation of his body, although oddly enough, there is an, odd, ray of hope at the end.

There are seven more short stories, but I was so depressed by all this that I gave up.

The cover has a black background with an arc of phases of the moon in silver across the top with Saturn in the center. Thin, thin silver rays emanate out through a series of thin silver arcs from the second to last silver icon in the vertical line-up that separates each word of the title. It’s a colorful title: two words in a greenish gold, then fuchsia, red, and ending with bright colonial blue. The editor’s name is on the bottom left while the series editor’s name is on the bottom right.

So, The Best American Science Fiction and Fantasy of 2015, huh? Depresses the *@#! outta me.