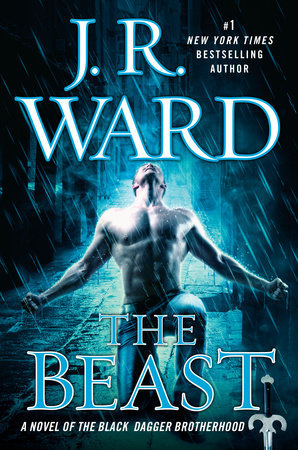 Buy on Amazon
Goodreads
Also by this author: Possession, The Shadows, The Bourbon Kings, Blood Kiss, Blood Vow, The Chosen, Blood Fury, “Dearest Ivie”, The Thief, "The Rehearsal Dinner", "The Reception", Consumed, The Savior, Blood Truth, Where Winter Finds You, The Sinner, J.R. Ward, A Warm Heart in Winter, Claimed, The Wolf

Fourteenth in The Black Dagger Brotherhood paranormal romance series and revolving around an elite fighting force of vampires based in Caldwell, New York. The main focus is back on Rhage and Mary, and several of the Brothers have a turn in the spotlight, however briefly.

It’s a series of personal crises for Mary and Rhage each. A tragic realization about family that could tear them apart.

Whew. The Beast has quite a lot to say about humans, and this is the first time it’s been so incredibly negative! Of course, some of it is too true. That bit about “their core competencies of ruining the environment and telling each other what to think and say” hit the mark.

Rhage’s reaction at that first battle didn’t make sense to me. Sure, V’s assessment later does, make sense, that is. But it still doesn’t make any sense of why Rhage would do that. Why does he want to die and take Mary with him? Considering how much Rhage adores his Mary, no…it didn’t work for me, and I suspect it tainted the whole story for me.

One of the many things I adore about this series is Ward’s pulling in the whole street-gaming culture thing. I started laughing at Rhage’s description of his progress in battle, “some hundred and fifty yards of video game later”, and didn’t stop laughing, well, except for the tearful scenes. Talk about show! Just a few words that describe the battle to survive and give the reader insight into Rhage’s mentality, lol. As for the Brothers’ fantasies about weapons…*shakes her head*…boys will be boys. And pranksters…! Wait’ll you read about the Little Mermaid, lol.

What’s with the obsession Bryant has with who Jo is spending time with?

Yep, the Brotherhood can be crude — witness Assail’s confirmation of getting in, undercover, so to speak, with the glymera, ROFL — and ya gotta love ‘em for their get’er done attitude.

I also love Mary’s relationship with The Beast. You can’t help the warm fuzzies at the contrast between how he reacts to everyone…and then to Mary. It’s that triad of warmth that makes most of the story so worrisome as Rhage explores his desire for children and the ever-increasing distance between him and Mary. It does make the Brother more human, as he struggles with his desires.

Speaking of warm fuzzies, it takes the terrifying Rhage and his brilliant purple GTO to get through to Bitty. It’s another sweet contrast, and a great example of how thoughtful the Brothers are, when you watch Rhage charm the withdrawn Bitty. It was even sweeter than the light-bulb moment Rhage had when he realized how very trusting and helpless L.W. was — and how much he wanted one.

Introducing the next story in the series via the “J.J. Abrams” insertion was nicely done. It was time for a human-vampire conflict, and it made sense for these kids to be there, creating this huge issue. It’ll be interesting to see how Ward arranges Jo’s encounter with the Brotherhood.

Oh, boy. That really hit me when V realized that the Omega was his uncle. Talk about black sheep!! Thankfully, what Assail does during the day to offset his cocaine jitters pulls you back into the funny side of life. I wonder if he’d like to come to my place…? Assail’s “seduction” of Throe was unexpected, and it did crack me up how affected Throe was.

Every marriage, er, mating, hits a rough spot and so has Rhage and Mary’s. His sudden insecurity has Rhage panicking and death becomes his companion, even as he regrets his Mary.

The hot-tempered Rhage, a.k.a., Hollywood (for his gorgeous looks), has an alter ego “gifted” him by the Scribe Virgin. The human Mary Luce had been dying of cancer when she met Rhage; her survival had been the price (Lover Eternal, 2). Now she works as a therapist at Safe Place. Cecelia Luce had been Mary’s mother.

The Black Dagger Brotherhood is…
…a small group of incredibly lethal, mostly gorgeous, incredibly muscled, and amazingly compassionate vampire warriors. They include Zsadist (Lover Awakened, 3) and Phury (twins with a chequered history); the former detective, Butch, who has buddied up with Vishous “V” of the too-lethal hand (they room together with their wives in the Pit); Tohr, the leader of the Brotherhood; the mute John Matthew (mated to Xhex; Lover Mine, 8); and, Qhuinn and his lover, Blay (Lover at Last, 11). Wrath, son of Wrath, is the Blind King of the vampires; George is his seeing eye dog. He’s mated to Beth (Darius’ daughter; Dark Lover, 1), and they have a son, “L.W.“, Little Wrath.

The Brotherhood’s medical personnel include Dr. Manuel “Manny” Manello, the former chief of surgery who is now mated to Payne, V’s sister (Lover Unleashed, 9); the ghostly Doc Jane (mated to V in Lover Unbound, 5); and, Ehlena (mated to Rehvenge, the leader of the symphaths who is also one of the King’s closest advisors; Lover Avenged, 7). Fritz is the household majordomo, a doggen.

Layla was one of the Chosen and is now pregnant with twins; Qhuinn is the father. Sadly for her, she’s in love with Xcor. Luchas, Qhuinn’s brother, is in recovery. The too-funny, pervy — “do you really use that shit for sex?” — Lassiter is the fallen angel who has attached himself to the Brothers. Nalla is Z and Bella‘s daughter. Trez and iAm (he’s mated to Catra, the Queen of the s’Hisbe; both brothers’ stories are in The Shadows, 13) are Shadows who live at the mansion. Boo is the cat. Saxton is the King’s solicitor and a former lover of Blay’s. Autumn is Tohr’s second shellan (Lover Reborn, 10). Amalya is the directrix of the Chosen, females who served the Scribe Virgin. Cormia had been one of the Chosen and is mated to Phury (Lover Enshrined, 6).

One of the glymera, Assail, is a vampire drug dealer who will sell to anyone — and I do mean anyone!; he also has one massive addiction problem. His cousins, Ehric and Evale with his Precious elephant gun (nicknamed Fang I and II), silently support him in all ways. Oh, man, some of those “ways” are more, ahem, interesting than others, lol. Marisol is the human cat burglar Assail loved but not enough.

Safe Place is…
…a shelter for battered female vampires that was started up by Marissa (she’s mated to Butch and is, was, Havers’ sister; Lover Revealed, 4). The new Wellesandra Annex was in memorial of Wellsie, Tohr’s beloved mate.

The terrified Bitty is a thirteen-year-old battered child whose mahmen, Annalye, is dying. Bitty claims that Rhuhn is her uncle.

Havers is the vampires’ judgmental doctor who drove his sister away. Lyric had been Blay’s mother. Naasha is the shellan with a huge kink, and not a good one. Tharem is her hellren‘s butler. Markcus had been a blood slave for thirty-two years who merely came to the house to apply for a servant position.

The Band of Bastards is…
…a lawless faction of vampires from the Old Country who want to tear Wrath down and take over. Xcor, son of no one, is their illiterate leader. Throe had been one of the Bastards. A disgraced aristocrat with his own nefarious plans. Balthazar and Zypher are part of the Band.

Jo Early is the adopted daughter of a rich couple, Phillie and Chance Early, whose lifestyle she simply can’t accept. She currently works as a receptionist/go-fer for the manipulative Bryant Drumm at a real estate firm. William Elliot is a journalist with a fascination for the number of unexplained events that seem to center around Caldwell. His cousin, Troy Thomas, is with CSI.

Dougie “Reefer” Keefer is the drug-using friend and housemate, the Shaggy from Scooby Doo. Chooch, T.J., and Soz are the rest of the stoner troop. Julio is the anti-vamp, a gangbanger who encountered vampires.

The Brownswick School for Girls is…
…no longer functioning. As a school. It is the base for the Lessening Society, a band of unaging men, slayers, lessers, who gave up their souls to the Omega, the Scribe Virgin’s evil brother.

The Scribe Virgin is the Mother of the vampire race and is looked upon as their god; Vishous and Payne are her literal children. The Fade is the vampires’ idea of Heaven; Dhund is their Hell. A mahmen is the vampire term for mother. A shellan is a wife while a hellren is her husband. The glymera is the upper class of vampire society. The Dhestroyer prophecy declares that he will kill the Omega. Doggens are vampire servants. The Tomb is the Brotherhood’s sanctum where new Brothers are inducted and the dead ones are placed.

The Bloodletter had been a vicious, nasty bastard who trained vampire warriors, including Xcor. A blood slave is a person held against their will and used as a blood source.

The deep blues of the cover showcase a dark night, the rain pelting down on a downlit, stressed-out Rhage in his black leather pants — and no shirt! Hubba-hubba! He’s on one knee in a dark, narrow space (that looks like an alley, which doesn’t make sense. The schoolyard would be more in tune), his arms spread, and his head thrown back as the rain beats down on his bare chest.

The title is who it’s all about, The Beast who lives within Rhage.

3 responses to “Book Review: The Beast by J.R. Ward”