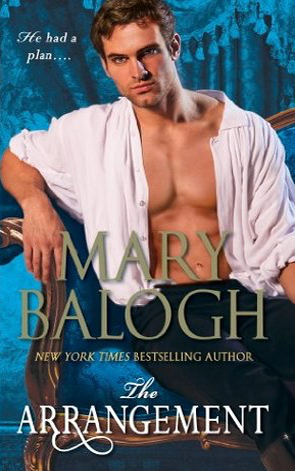 Second in The Survivors’ Club historical romance series set sometime after 1815 and revolving around a group of men wounded in battle. The couple focus is on Sophia Fry and Vincent Hunt.

I actually read this first, as I was looking for a comfy sort of easy read, but I got hooked on Balogh’s premise and sought out The Proposal, 1, and then The Escape, 3, for there is much to be said for laughter and consideration…as well as for the joy these two have in storytelling!

So what did pull me in? Balogh’s exploration of the psychological issues of war and being wounded. Each of the men in this group are having problems in adjusting back to the real world, and Balogh ties each in to the romance that rescues them.

In Vincent’s case, he’s surrounded by all those relatives wanting to do everything for him, hanging onto him, not “allowing” him to do anything dangerous. And he finds a woman who will support him in going at life, of doing the things he loves.

It’s that third person dual point-of-view that allows us in on the private thoughts and feelings from Vincent’s and Sophia’s perspectives.

And it’s their union that is my niggle. Yes, circumstances required a quick response, but I do wish Balogh had done more to make me feel that Vincent’s decision made sense, as opposed to being convenient for Balogh and quick to write. I also think Balogh could have wrung that confusion over Sophia leaving Vincent after a few years for quite a few more tears, as well. I certainly forgot when and why she was to leave.

All in all, it’s a story of independence and doing for oneself that will leave you cheering.

Vincent simply had to escape his matchmaking family…only to fall on his own sword weeks later in a gallant rescue of a beleaguered lady.

Vincent Hunt, Viscount Darleigh, is blind and being driven out of his mind by well-meaning relatives. Martin Fisk is his valet and childhood friend, the son of the village blacksmith. Handry is his driver.

Middlebury Park, Gloucestershire, is…
…part of the title Vincent inherited and where all his relatives tend to gather. Amy is his oldest sister married to Anthony Pendleton with two children, William and Hazel; Ellen is the middle sister with her daughters, Caroline and Ivy; and, Ursula is his youngest sister with a son, Percival. Mrs Pearl is his grandmother. Rosina will become Sophia’s maid.

Miss Debbins is Vincent’s music teacher; her sister, Agnes Keeping, is an artist. Bertha and Dan are the stars of a children’s story Vincent and Sophia have been weaving. Dennis Fitzharris is Agnes’ cousin and a publisher. Shep will be the name of the sheepdog that Mr Croft is training for Vincent. Tab is the cat. Mr Jones is the vicar; his wife runs the sewing circle. Andy Harrison took Vincent fishing; his wife is part of the sewing circle. Julia Stockwell has a new baby. Sal is the blacksmith’s buxom daughter. Mr and Mrs Latchley are tenant farmers of Vincent’s.

Covington House, Barton Coombs, Somerset, is…
…home where Vincent grew up. Mrs Plunkett had been their housekeeper there.

Sophia “the mouse” Fry is an artist with a talent for caricature and an orphan tossed from relative to relative. She was invisible to the cold Aunt Mary who died, then Aunt Martha who pretended she was only a maid who had to be allowed to dine with the family, and then Sir Clarence and her aunt, Lady March, the snooty inhabitants of the village and their conniving daughter, Henrietta, ignore her unless a task needs doing. Sophia does have two other uncles, including her uncle Sir Terrence Fry, another aunt, and the self-absorbed Sebastian Maycock, Uncle Terrence’s stepson, could be considered a cousin. Mr Ratchett had been a friend and the second at her frivolous father’s duel.

The inhabitants of Barton Coombs include Mr Kerry, who has an elderly mother; Joseph (he’s the parson) and Elsie Parsons are kind in their way; Miss Waddell is strong in her opinions; Mrs Fisk sets to baking; the Misses Granger; Miss Hamilton will surely attend the dance; and, Edna née Biggs and her husband, Samuel Hamilton.

Penderris Hall, Cornwall, is…
…the home of George Crabbe, the Duke of Stanbrook, where the Survivors’ Club meets and includes the stuttering Flavian Arnott, Viscount Ponsonby; Hugo Emes who was the hero of Badajoz and became Lord Trentham, a Cit who married Gwendoline, Lady Muir (The Proposal, 1); Ralph Stockwood, Earl of Berwick; Sir Benedict “Ben” Harper whose legs were crushed; and, Imogen Hayes, Lady Barclay, who lost her husband to torture she was forced to witness.

Mrs Emes is Hugo’s mother; Constance is his half sister; and, Philip Germane his paternal uncle. Mavis is Gwendoline’s maid. Mr Welland is a hairdresser. Lily, the Countess of Kilbourne, is Gwen’s sister-in-law married to her brother. The blind Lizzie (her father is the Marquess of Attingsborough) is a cousin of Gwen and Lily’s and has a dog.

Geoffrey Dean is the son of Grandmama’s dearest friend in Bath with a daughter, Philippa Dean (The Escape: “The Suitor”, 1.5) who is marrying the duke’s heir, Julian. The Marquess of Wrayburn doesn’t care for Henrietta. Ella is the maid the duke has assigned Sophia for her stay.

The bluesy background of the cover is an arrangement of hanging drapery with the blind Vincent seated on an upholstered chair with an arm sweeping out, one of his own arms resting on it. In a full white, unbuttoned shirt, exposing a lovely chest, ahem, he looks out towards the front with a blank look in his eyes. A tease in white is to the left of Vincent’s head while the author’s name is in a pale yellow and spans his abdomen. Beneath it is an info blurb with the title in a scripted font immediately below that. All in that pale yellow.

The title is a rescue, for The Arrangement will make right a wrong done to poor Sophia.

4 responses to “Book Review: The Arrangement by Mary Balogh”