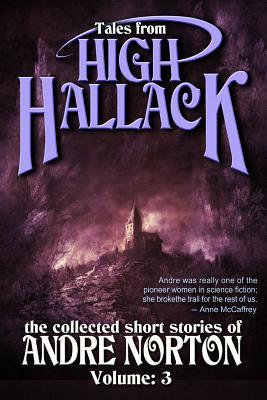 In the third and final volume of High Hallack, tales of high fantasy, science fiction, and coming of age reach back as far as 1943, yet are still as fresh and relevant today as when they were written. High Hallack was a place in Andre Norton's fiction and was also the name of the genre writer's library she opened in Tennessee. It is a wondrous keep that she called home, and now High Hallack opens its gates and allows these amazing stories to unfold.

Twenty-one short stories of fantasy, and for the most part, I did not enjoy them. There are a few in here I did like, primarily because I could understand what the story was about. I didn’t have to work hard to figure it out. And that’s sad. I suspect I got so focused on the struggle to understand that those I enjoyed suffered by comparison.

This ARC was provided by NetGalley and Open Road Integrated Media in exchange for an honest review.

The Stories
“Auôur the Deepminded” is a convoluted tale of a warlord’s surviving family about to be routed by his enemies. Seeing ahead to the future, Auôur has commanded a ship to be built to take them to safety. I think they’ve gone to Iceland.

“No Folded Hands” is one of those stories where I felt dropped in and scrambled, trying to figure out what was going on. I think it’s a philosophical difference between free natives and the white man’s preference for regimentation and rote thought. Difficult to read and understand. Norton has a brief bit at the end where she discusses her beliefs, and she’d have done better to not be so obtuse.

“Bard’s Crown” is a quick drop into the life of an Irish village and the damage a ruling idiot can have on his people. It was an interesting if frustrating tale with lots of lovely words telling of a horrible situation but not much information.

“Frog Magic” is cute enough and does a twist on the frog prince being kissed by his princess. In this case it’s warring wizards. Only Norton has some holes in this that left me spending more time wondering about those than on the tale itself.

“Herne’s Lady” was cute with an interesting twist on Herne and inheritance when the Honorable Olivia Farrington inherits Oaksleigh Manor from her Great-aunt Lettice. It’s the villain of the neighborhood who helps her learn the underlying secret of Oaksleigh. It’s a touch of Little Red Riding Hood visiting her granny and the wolf who comes to visit. The best story I’ve read so far, although whoever proofread this knows nothing about Regency slang.

“The Outling” is, wow, it’s a wonderful story. I suspect because I can understand it on a first reading, lol! A rescue of a newborn baby followed by humanity’s fear and need to blame someone. It’s a nice try at pointing the finger at our need to make a world to fit our own preferences and throwing out what we don’t understand or hate. Certainly a story to make you think.

“Stonish Men” made me think of Clive Cussler stories with its myths of stone men who could not be injured. In truth it’s a small group of Knights Templar who have escaped the massacre set by King Philip and the pope. They find a tiny refuge and build a stone fort to protect the treasure. I do wish Norton had provided a sign of some sort that we were switching from one time to another in this. A tiny blip in several ages of lives with an ending you must imagine for yourself. Rather unsatisfying.

“Churchyard Yew” finds that something evil lingers in Hex House, and it’s Dr. Ilse Harveling who is determined to root it out. Sad and slightly scary.

“Root and Branch Shall Change” is another confusing story. It starts out with confrontation and accusations, an interesting beginning with her memories of past lives. It is, however, all entangled in a bunch of words that left me confused as I struggled to figure out what it’s about, as if each paragraph were its own piece. It finally begins to make a form of sense, and my curiosity rose as she moves further into this collapsed mountain hold. I’d be curious to read if Norton wrote any more of Merlin and Nimue’s adventures, but not if it’s as convoluted as this was. Jesus, Norton can really twist the words around and make them archaic sounding.

“White Violets” is just nasty. The story is nicely written, it’s the content of it. The start of it provides the fear that will follow you into the next part of the story. Thank god at least Mackie had good sense!

“Needle and Dream” is very different with its isolated village of dreamers. Thankfully, it was easy to read.

“Procession to Var” was a switch-up. All the stories so far have had a medieval feel to them. This one is very sci-fi with a little Lara Croft/Indiana Jones thrown in for that archeological artifact excitement. Norton is very careful to keep us in suspense as to who the interesting parties are.

“Set in Stone” is a science fiction horror story of a young man enslaved by cruel people and the very strange way in which he “escaped”. Norton does leave you wondering at the end.

“Ravenmere” is about an artist who creates images using beads. It sounds absolutely beautiful, and I got the itch to try it myself. Only, this is a different sort of a fantasy horror story as the artist is forced to work without stopping. A fascinating interpretation of the Ladies of the Lake, Merlin, and their magics. And, as usual in this collection, Norton leaves me wanting.

“Three-Inch Trouble” is an interesting combination of sailor and space ship with a sense of the 18th century in it with a fun story. It has its own horrors and it takes a cat to fix it.

“The End is the Beginning” is another odd one, almost a Red Dwarf of a story with cats who have evolved. Norton keeps us in the dark until the end, at which point we’re in a different kind of dark with all sorts of questions unanswered.

“The Familiar” is another fantasy involving a cat and I think the familiar is his. It’s a short blip of a day in the life when invaders are storming the city, and suddenly, the cat is regretting all the days he let slip away without training his familiar.

“Red Cross, White Cross” is another Knights Templar story of so many betrayals and the honor of one horribly injured knight desperately trying to fulfill his duty. Easy to understand.

“Sow’s Ear — Silk Purse” is an odd story of a maiden who would rather be ugly than be forced to marry. Definitely different with a twist and a most unexpected ending.

“The Cobwebbed Princess” is a twist on the Sleeping Beauty fairytale with a cat as her waking prince. Somehow it twines in with the goddess Bast, and she’ll have another task for her kitty. Cute enough, but why? What was the purpose of this sleep spell?

“Faire Likeness” was fun and scary, combining a huge family property with the Renaissance Faire and witchery. It’s a friend come to help out who is given no information and yet left in peril. Norton pulled me in to this contemporary tale — I suspect because of its shards of normalcy. Intriguing and terrifying, and it will leave you wondering about the Faire folk.

The Cover
The cover is purple and white conveying a sense of fantasy and doom. A tiny castle perched atop a high hill, cliffs and trees encroaching on all sides.

The title is somewhat generic with its Tales of High Hallack, Volume 3. It’s at least easy to keep track of.