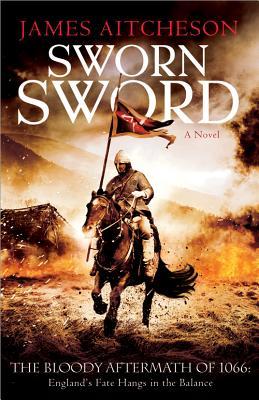 January 1069. Less than three years have passed since Hastings and the death of the usurper, Harold Godwineson. In the depths of winter, two thousand Normans march to subdue the troublesome province of Northumbria. Tancred a Dinant, an ambitious and oath-sworn knight and a proud leader of men, is among them, hungry for battle, for silver, and for land.

But at Dunholm, the Normans are ambushed in the streets by English rebels. In the battle that ensues, their army is slaughtered almost to a man. Badly wounded, Tancred barely escapes with his life. His lord is among those slain.

Soon the enemy are on the march, led by the dispossessed Prince Eadgar, the last of the ancient Saxon line, who is determined to seize the realm he believes is his. Yet even as Tancred seeks vengeance for his lord's murder, he finds himself caught up in secret dealings between a powerful Norman magnate and a shadow from the past.

As the Norman and English armies prepare to clash, Tancred begins to uncover a plot which harks back to the day of Hastings itself. A plot which, if allowed to succeed, threatens to undermine the entire Conquest. The fate of the Kingdom hangs in the balance.

First in the Conquest historical fiction series and revolving around Tancred a Dinant, a loyal knight of Lord Robert’s in 1069 in England. This ARC was sent to me by the author for an honest review.

Another buried treasure in my moving boxes. It’s a brief glimpse into Tancred a Dinant’s life within the space of a few months with one battle after another — I did enjoy reading from a fighting man’s perspective as opposed to a noble’s.

This was a mixed blessing with Aitcheson providing a good show of descriptions and bringing in the tension necessary for such travails as Tancred, his men, and the ladies underwent on their escape. The spelling of the names certainly helped put me back in 1069, lol.

I wish that Aitcheson had done more with the tension over the betrayals and made it more of a mystery. It was all too simple to discover, and frustrating because of it. As for Malet, he should have been more emotional, at least angry!, over the two betrayals he experienced. This is where Aitcheson fell more toward the tell side.

When I consider how much effort was put into the start of Sworn Sword, I am disappointed with how little was put into the main conflict. It read more like Aitcheson suddenly realized he had to finish and was tired of all the writing. I did enjoy his historical accuracy. (Yes, I do realize that he took some creative license and that’s why it’s fictional history.) More emotion would have been good — I did want to cry at the start, but Aitcheson didn’t put in the depth for the characters.

When it comes to battle, death is a given. One hopes it isn’t one’s own death, and it doesn’t ring true for me that Tancred insists that his lord was murdered. Hullo…battlefield…

As for the ending, I felt as though Aitcheson left me hanging, especially with Tancred’s comments about heading to the Continent and seeking other employment. What about the land? Beatrice? That said, I would be curious to read The Splintered Kingdom.

The English are beginning to fight back, several years after the Battle of Hastings, and Tancred has lost his lord under fell circumstances at Dunholm (Durham). Such that he will be looked upon with disfavor.

Now Malet is under attack in Eoferwic, and he has set Tancred to escort his wife and daughter back to London. A journey fraught with danger and betrayals.

Tancred a Dinant is a Norman knight in Lord Robert’s conroi. Rollo is his horse. Oswynn is his woman. Ernost and Mauger are the men Tancred has hired to watch over her. His father had been a minor lord in Dinant; his older brother took Tancred in when his father died and gave him over to a monastery.

Lord Robert de Commines is…
…the new Earl of Northumbria and a close friend of King Guillaume (William the Conqueror). His men-at-arms include Fulcher fitz Jean, Ivo de Sartilly, Gérard de Tilliàres, Eudo de Reyes, and Wace de Douvres; these last two are Tancred’s closest friends. Folcard was one of the men there when Lord Robert first encountered Tancred.

Lord Guillaume Malet is…
…seigneur of Graville-Sainte-Honorie and vicomte of the shire of Eoferwic. Father Ælfwold is his chaplain who helped tend Tancred. Elise is Malet’s wife; Beatrice is his daughter. The Wyvern is Malet’s ship; Aubert is the ship’s master. Oylard is his second-in-command. Radulf, Philippe d’Orbec, and Godefroi fitz Alain are part of the entourage.

Robert Malet is his son and just arrived in Lundene. Ansculf is captain of Robert’s household knights.

Eoferwic (York) is…
…a shire under Malet’s governance. Lord Richard is its castellan. Gilbert de Gand was a rival of Lord Robert’s. Guillaume fitz Osbern will become its new lord.

Lundene (London)
Wigod is Malet’s steward in Lundene. Olif is a page. Men bound to Ernald, the reeve, are quick to act.

Wiltune is…
…where Eadgyth is a nun at a convent; she is also the widow of Godwineson. Cynehild is the abbess. Burginda is another nun.

Waltham was…
…founded by Harold and Wulfwin is its Dean. Æthelric is one of the canons.

Suthferebi is…
…a thriving port. Ligulf keeps an alehouse and deals in horses.

The seventeen-year-old Eadgar Ætheling is the last surviving heir of the old English line. He used to be close to Harold Godwineson. Gospatric of Bebbanburh and Waltheof Sigudsson are uniting with Eadgar. Sweyn Ulfsson is the Danish king who has laid claim to the English crown.

Brother Raimond was the librarian who had taught Tancred. Huges de Grandmesnil, vicomte in Wincestre, and his brother, Hunfrid de Tilleul, the castellan at Hæstings, fled back to Normandy.

The cover is cocoa browns with orange and creams. A chainmailed knight a’horseback with pennant flying is thundering across a battlefield, dirt flying from under his horse’s hooves, fires and smoke in the background against a background of sloping hills. For all its violence, it’s a rather peaceful scene.

The title is all about Tancred, the Sworn Sword of first Lord Robert and then Lord Guillaume.