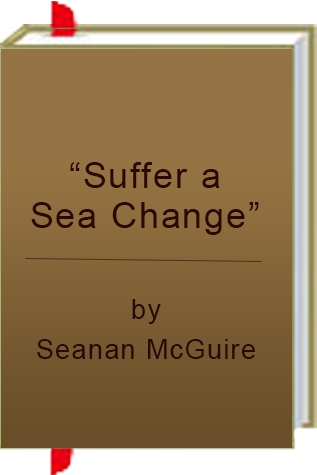 Goodreads
Also in this series: Chimes at Midnight

Also by this author: Chimes at Midnight, Indexing, The Winter Long, The InCryptid Prequels, Pocket Apocalypse, A Red Rose Chain, Reflections, Once Broken Faith, "Dreams and Slumbers", Chaos Choreography, Magic For Nothing, Indigo, Every Heart a Doorway, The Brightest Fell, "Of Things Unknown", Beneath the Sugar Sky, Night and Silence, The Girl in the Green Silk Gown, "The Recitation of the Most Holy and Harrowing Pilgrimage of Mindy and Also Mork", Tricks for Free, That Ain't Witchcraft, "The Measure of a Monster", The Unkindest Tide, "Hope is Swift", Come Tumbling Down, Imaginary Numbers, "Follow the Lady", "The Fixed Stars", "Forbid the Sea", "No Sooner Met", Across the Green Grass Fields

A short story that begins in Night and Silence, 12, part of the October Day urban fantasy series, that shows us Gillian’s perspective.

“Suffer a Sea-change” is found in the back of the hardcover version of Night and Silence.

It’s a first person protagonist point-of-view from Gillian’s perspective from the moment that the false queen stabs Gillian and Tybalt races off with her, and it’s all about mother love.

Oh, I loved that explanation of the pause. It was so vivid, such a lovely bit of show, as I could see that moment happen.

Even better, it continues the probing questions of why, which began in Night and Silence, and this time the Luidaeg is asking them of Gillian, a kickstart that forces Gillian to do her own reflecting without influence from others. Ahem.

Firtha tells Gillian the story of how the Roane were betrayed.

It is indeed a sea-change for Gillian, as she considers all that she was not told. And all that she was. Miranda certainly doesn’t help her own case, and she’s looking as self-centered as ever.

Lol, that’s how the elderly stay current, they jump into the latest technologies, just as the Luidaeg explains to Gillian about her first car.

This ought’a be interesting with the new possibilities that Gillian’s renewal offers up, right along with the new “goals” that Toby has realized in Night and Silence.

It’s the Luidaeg’s efforts as a mother, and as one who truly loves Toby, that makes it possible to keep Toby’s hopes alive.

It also gives the Luidaeg one more child to lie to…and to keep her kind.

Gillian Marks has two mothers. The biological one who birthed her, Sir October Daye, and the stepmother who raised her, Miranda Marks, who married Toby’s fiancé, Cliff Marks. Oberon is Gillian’s great-grandfather, and he had two wives: Maeve and her sister, Titania. Psst, Titania is the one who cursed the Luidaeg.

Tybalt is a Cait Sidhe and the King of Dreaming Cats in San Francisco. After events in Night and Silence, 12, there is some question as to whether he and Toby will be together.

The Luidaeg, a.k.a., Antigone, is a Firstborn, the sea-witch, and a child of Oberon and Maeve, cursed to always tell the truth. Firtha was her youngest daughter, one of the Roane who had been murdered. Poppy is a pixie, made larger thanks to a spell in The Brightest Fell, 11, who is now apprenticed to the Luidaeg.

Half Moon Bay is…
…headquarters for the Selkies who are led by Elizabeth “Liz” Ryan. Diva is one of her children, but half Roane as well, so she’ll never need a skin. Here, the Luidaeg is known as Annie, a cousin. The Lost Skins are those Roane skins that return to the Luidaeg.

Eira Rosynhwyr, a.k.a., Evening Winterrose, was the Luidaeg’s nasty sister.

Dianda Lorden, a Merrow, is the Duchess of Saltmist, an Undersea Kingdom.

Merlins have but whispers of fae blood. A skerry is “a reef carved from … reality, held fast by the will of the one who holds it.” The knowes are a lesser world between earth and the Summerlands, the last accessible realm of Faerie and created by later generations.

The title is from a quote in Shakespeare’s Tempest and Gillian will “Suffer a Sea-change” as a result of events in Night and Silence, the cover reflecting the grimness of the story with the distressed background, flying creatures, and a fantasy Gillian, her long hair down, blood on her white shirt, the slight protection of a black leather jacket, her right hand holding a dagger by its hilt, as she appears to head up the stairs. There’s an info blurb at the very top in white with the author’s name in a smoothly rounded and embossed orange at the top. The title is in a distressed yellow at the bottom with the series information in white below that.

2 responses to “Book Review: “Suffer a Sea-change” by Seanan McGuire”