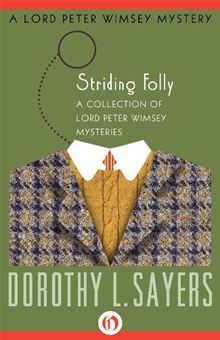 
The fifteenth book, an anthology of the last three stories to be published in the Lord Peter Wimsey Mysteries historical amateur sleuth series, and revolving around the brilliant, self-effacing Lord Peter.

“Striding Folly” is a carefully plotted murder thwarted by a dream. And it’s lucky for Mr. Mellilow that Lord Peter was on the case. What I find sad about the story is the threat to Mr. Mellilow’s peace. His dream of his forever bit of England.

The Characters
Lord Peter Wimsey is a second son who indulges an interest in solving crime. Mr. Mellilow is an educated man with an interest in chess who has retired to the peace of his cottage. He thought. Mr. Creech is a businessman with an eye to profit. Sir Henry Hunter has heard things about Creech. Moses is a traveling salesman for Messrs. Cohen & Gold of Farringdon Street. There’s also a superintendent, a police surgeon, and the chief constable.

“The Haunted Policeman” is a conundrum, an odd variation on the locked-door mystery of a house that doesn’t exist, a murder that never happened.

I do adore Sayers’ humor:

“‘Do you feel it’s up to standard?’ he inquired with some anxiety. ‘Of course, your workmanship’s always sound — but you never know with these collaborate efforts.’

‘Good.’ He turned abruptly to the nurse. ‘All right; we’ll keep it. Take it and put it away and tell ‘em to invoice it to me. It’s a very interesting addition to you, Harriet; but it would have been a hell of a rotten substitute.”

And Peter has a son…

“…headed for the butler’s pantry with the swift instinct of the homing pigeon. There they had treated him with great humanity, and allowed him to clean the silver.”

The Characters
Lord Peter Wimsey has been married to Harriet Vane for a year now. William is the footman. Nurse Jenkyn has been engaged to help with the baby.

Constable Alfred Burt knows what he saw. Jessop and Pinker are fellow coppers. Constable Withers was on the other beat. Sergeant Jones thinks Burt was drunk on duty. Mr. O’Halloran lives at Number 12 in Merriman’s End. Sir Lucius Preston is O’Halloran’s snooty uncle and an R.A. Stefan Petrovinsky is a friend. I think he’s married to Marfa. Number 14 is a retired Indian Civil Servant. Number 10 are two maiden ladies.

“Talboys” finds Bredon taking on a dare, and when caught, he confesses to his father. Who, sigh, must break out the cane and give him three of the best. It’s a judgment that horrifies Miss Quirk who expostulates at length on the subject…until the shoe is on the other foot, lol.

Oh, I did enjoy Peter’s dealings with his son, and I had to laugh at Harriet’s placid explanation of Bredon’s sense of being promoted to a cane. And I do like the household rule of not revisiting the issue(s).

The Characters
Lord Peter, a.k.a., Mr. Scatterblood, and Lady Peter, a.k.a., Harriet, married for seven years, now have three children: Bredon, a.k.a., Cap’n Teach, Roger, and Paul, who is disemboweling his stuffed rabbit, Bom-Bom. Bunter is Lord Peter’s man. Cuthbert is the snake.

Miss Quirk, a friend of the bitchy Helen‘s, is staying with the Wimseys and has some really stupid ideas about discipline.

“‘Just because your boy was told not to pick the peaches, he picked them. If he hadn’t been forbidden to do it, he wouldn’t have been disobedient.’

‘No,’ said Harriet. ‘I suppose that’s quite true. He would have picked the peaches just the same, but it wouldn’t have been disobedience.'”

Mr. Tom Puffett is a builder by trade with an interest in gardening. Jinny is Puffett’s daughter. George Waggett is a big boy who appears to be a bit of a bully. Joey Maggs is another of Bredon’s friends. The vicar shows peaches, and others who show include Dr. Jellyband, Jack Baker (he took Joe Sellon‘s position after Sellon emigrated to Canada; Busman’s Honeymoon, 13), Critch, Billy Maggs the blacksmith (he has a brother), and Wagget the butcher.

The cover is a light army green with the upper half of a tweed suit jacket in oatmeal, navy, and gold plaid with a gold cableknit sweater underneath under which is a white rounded-collar shirt and a red and gold tie. There’s a graphic of a monocle swirling up into the upper half of the cover, circling the title (in white) with its series information. Beneath the jacket is the author’s name in a pale gray. A white round colophon is at the center bottom, overlapping the red band of the bottom that mirrors that at the top.

The title is the first story in the anthology, a tower that symbolizes the reason for events in Striding Folly.