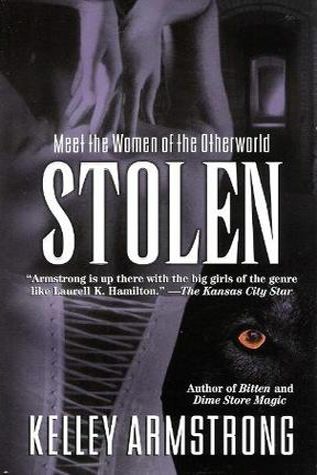 Second in the Women of the Otherworld urban fantasy series and revolving around Elena Michaels, a reluctant werewolf and journalist.

Geez. This is bad. No, the writing is great, it’s the premise that is so awful. “Conducting serious scientific research”? My ass.

I can’t believe the delusions these antagonists embrace. Do they really think calling their prisoners “guests” is gonna make it all better? Puh-lease. These bad guys are bored and self-obsessed. All dropouts from humanity. And I’m talkin’ the concept of compassion for others. That’s the theme, a reversed compassion with the supernaturals — the “horror” that has “us” all shaking in our boots — as the true humanitarians as we observe (and quiver in disgust!!) at so-called humans who are true evil. It’s one theme I keep reading over and over (in a lot of other books) that it’s humans who are the true “brutes, as we’re the only ones who routinely and purposely hurt others for our own advancement.

Think about it. How many animals have you seen declaring war on each other? Gassing their own? Committing rape and murder? Yeah…

Thankfully, Armstrong includes some humor, I especially enjoyed the bit about Clay trying to be less controlling, overprotective, and possessive. It is funnier now, as I’ve read the whole series. I’d forgotten about having read Stolen. I thought it was a new book…sigh… And it does make me want to go through and do a re-read!

“Other parents warn their kids not to talk to strangers. I had to warn mine not to eat them.”

More crack ups include Ruth’s claims that werewolves see mutts as inferior, but those superior ones, the witches, see witches outside a coven as merely “poor misguided souls in need of protection and conversion.” Yeah. Right.

Poor Elena. It was fascinating how well Armstrong projects Elena’s attempts to “slide in”, to “cozy up” to her captors, er, her hosts. Geez, this whole attitude on the part of the antagonists… How can anyone be that stupid? Idiotic? What am I saying? They’re vicious, nasty cruel people so self-obsessed with their own desires…I want to kill ’em.

“If I was a very good girl, I too could kidnap and torture my fellow supernatural beings.”

Bauer is so condescending. Jesus. All the things she “despises” about Elena are what she hates about herself. Why’s she in this? She’s bored. She wants power. She needs some “excitement”. Oh, yeah, baby. She gets her excitement all right. And then…blame the messenger. Idiot. Of course, Paige doesn’t impress me either. It seems she isn’t impressing her aunt much either, lol. Ruth knows that girl too well *more laughter*

Writers should take note on how well Armstrong has avoided the dreaded info dump with the backstories Armstrong includes on Elena’s childhood and her parents’ deaths; Jeremy’s hateful father; a wee dab of Clay surviving in the bayous; and, a hint that werewolves were once part of something bigger. Hmmm…

I know it’s not a spoiler, otherwise we wouldn’t keep going in the series! But y’all’ll LOVE the ending. Well, okay, you have to be fine with violence and, um, stuff. But talk about comeuppance. Oh yeah, baby!!

Cocky, and believing herself unbeatable, Elena sets out to investigate an Internet posting about werewolves, only to find herself kidnapped by a group with mixed interests funded by an Internet billionaire.

Those interests are about paranormals — witches, vampires, shamans, werewolves. Discovering the how. Having the power…to torture, control, “play” their perverse reality video game.

Only to find that Elena Michaels is not one to sit back. After all, she’s a werewolf.

Elena “Andrews” Michaels is, so far, the only female werewolf. Has been for 12 years. She’s a journalist also tasked with monitoring the Internet for mutt activity. Jeremy Danvers is the Alpha of her pack; he checks newspaper accounts of maulings, etc. Professor Clayton Danvers is his adopted son, bodyguard, second-in-command, and Elena’s lover. Career-wise, he’s a research-based anthropologist who does occasional lecture series to stay in touch with his contacts and maintain that career. The rest of the pack includes Antonio Sorrentino and his son, Nick. Karl Marsten is a mutt, but one with territory. Malcolm had been Jeremy’s vicious father.

Ruth Winterbourne is a witch and leader of her coven; Paige is her “great-niece” and a professional computer programmer who can hack. Adam Vasic is a fire half-demon; his sire is an Exustio demon. His stepfather is a Tempestras half-demon and supposedly an expert on demonology.

Cassandra is a vampire, extremely self-interested but will put herself out for a “good” reason. She was 46 when she was turned, in seventeenth-century Europe. Aaron is another, angry, vampire. Kenneth is a shaman.

The “research center”
The perverse, controlling Tyrone “Ty” Winsloe, a computer geek (his company, Promethean Fire, is world famous) is a billionaire bankrolling the entire project; he’s in it for the fun of it. Sondra Bauer is a rich woman who heads up a corporation. But they won’t listen to her…*pout*… Dr Lawrence Matasumi is a renowned parapsychology researcher who believes werewolves and other supernaturals evolved, and he has a reputation for skirting the code of research ethics. No kidding… Tess is his research assistant. Dr Carmichael is the chief, well, only, medic. Isaac Katzen is a sorcerer. And sorcerers hate witches.

Colonel R.J. Tucker is the head guard with a questionable past. One of the guards, Xavier “Houdini” Reese, is a half-demon who can teleport short distances; Evandius was his sire. Former Corporal Paul Ryman and Cliff Joliffe are the guards who most enjoy abusing the priso…er, capt…I mean, “guests”. Pierce, Peters and Lewis are more guards.

Prisoners
Savannah Levine is twelve years old and the daughter of a former Coven witch, Eve (she’s actually half demon and half-witch). Dr Armen Haig, a psychiatrist and half-demon, is a human chameleon. Curtis Zaid, is the depressed and not-very-powerful vodoun priest. Leah O’Donnell, a deputy sheriff in Wisconsin who is the daughter of an Agito demon, has telekinetic powers. Qiona is an ayami, the spirit who guides Roger, a shaman. Patrick Lake is a mutt, a drifter and man-eater whom Clay beat some time ago.

Mutts are non-pack werewolves, shifters who can’t be bothered fighting the urge. The Legacy is the Pack history book.

Two types of demons exist: the good are eudemons and the bad are cacodemons (and the only ones who can procreate). The children (they become half-demons) inherit qualities from the father and are always human in appearance. Igneus is another type of demon. Volos are a half-demon with the highest level of telekinetics.

The cover is spooky in its black and purple with that one bit of orange, the eye of the black wolf staring off. At first glance, Elena’s hands writhing at the back of her neck look like aetheric trails of smoke, pointing downwards from the top of the invitation to “Meet the Women of the Otherworld” — it’s a nice way to introduce the series information *grin* (all the text is in white with the author’s name in a sans-serif at the bottom). Keep going down, past the title in an elongated serif font, and just below the testimonial below that rests on the top of the back-laced corset she’s wearing — a perverse nod to Ty’s demands. In the upper right, the black and purples are used to great effect to give an impression of depth, of a long hall leading to an open doorway, to escape…

The title is the focus, on all those who are Stolen from their lives.