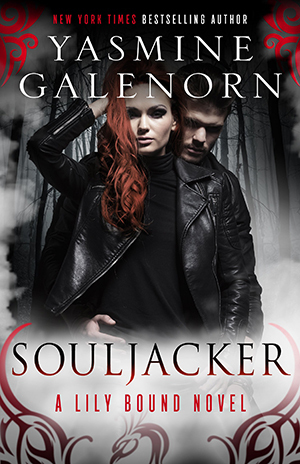 Buy on Amazon
Goodreads
Also by this author: Autumn Whispers , Night Vision, "Flight From Hell", Flight From Death, Legend of the Jade Dragon, Darkness Raging, Fury Rising, Murder Under a Mystic Moon, Ghost of a Chance, Once Upon A Curse

First in the Lily Bound urban fantasy series, similar to Galenorn’s Otherworld / Sisters of the Moon and Fly by Night series, and set in Seattle revolving around Lily O’Connell, a succubus, and her circle of friends.

Souljacker is an interesting take on how a succubus makes a living in a contemporary world, and I’d have enjoyed the story more if this hadn’t been one of Galenorn’s off-days. Yeahhhh…I really, really hate it when a writer doesn’t make connections in their paragraphs. And Galenorn has more topics in one paragraph that don’t connect to one another than a stray dog has fleas. It’s like reading a story by a beginning writer in middle school.

Everything is so easy for our protagonists. Okay, sure, there’s a serial killer after them and Lily is being targeted by Tricia which turns her life upside down, but Archer just slides right on in, no tension, no drama. Galenorn gives us all these warnings about Archer…and…kersplat…nothing. Then Marsh slides in…no tension, no drama. And considering he was Lily’s lover, I’d have expected something. Nor does he express any amazement at the technological advances of a world 75 years in his future.

What purpose does it serve the story for Lily to pretend not to know about Tygur’s domestic arrangements? Why would Jolene expect Lily to let his wife know about his current state? How stupid can Lily be in thinking she can talk to Tricia or any of her friends? She is amazingly naive for someone who has lived hundreds of years.

I do appreciate that Galenorn has set up a back story for her characters. as she introduces the cast of characters for the series. It’s so much nicer to begin a story thinking the characters had a life before “I” showed up, *grin*. What I don’t enjoy is the info dump. Oh, Galenorn does fairly well on introducing the information as a natural part of the story using Lily’s perspective in the first-person protagonist point-of-view using flashbacks, but she does it so often that even that doesn’t disguise the dump, and it became annoying.

“…the other inmates were relieved to see him go. Trust me, when criminally insane Fae and Were are ‘relieved’ that a fellow prisoner escaped, there’s a problem.”

Her concept of magic changing the structure of our reality is intriguing, and a great set-up for future issues.

I did like the promise (and hope) at the end. And…yes…I’ll be reading book #2 when it comes out.

When a client is murdered in Lily’s house, a patch of skin missing from his chest, she knows there’s something evil afoot. Then comes the news that the Souljacker — a tattoo-artist-turned-vampire — has escaped from an institution for criminally deranged Supernaturals. And he’s hunting and killing everyone he has ever inked.

Worse, the client’s widow is on a vendetta from Hell to destroy Lily.

And the police are helpless, barred from investigating any crimes committed by vampires.

Lily O’Connell is a succubus who runs Lily Bound, an elite sex salon in the Blood Night District of Seattle that allows Lily to feed as well as make a good living. Mr. Whiskers is her “pet cat” whom she rescued 600 years ago; Luther had been her horse back then. Marsh Sheffield had been the human lover she murdered 75 years ago. Her best friends are Danielle “Dani” Halloran, a witch (Dani runs the Wandering Eye, a witchcraft shop) who supplies Lily with her protection wards, and Percival “Nate” Winston, a human IT programmer and Lily’s next-door neighbor.

Archer Desmond is a notorious and hot Chaos demon and private investigator.

The Winter Court is…
…located on the Eastside of Seattle and ruled by Queen Wynter who has plans for Lily. Summerlyn is Wynter’s sister located in Australia. Katarina the Frost is one of the Winter queen’s best executioners and right-hand witch and one of the Calliach’s daughters. The Aespions are the queen’s agents and are led by Vesper. Dextra is one of the queen’s warriors-at-large.

The Paranormal Investigations Unit (PIU) is…
…composed of either Fae or Were. Detective Jolene Whitehorse, a lone werewolf, had been Lily’s lover before their quarrel. Lucas is her work partner.

Tygur Jones, a weretiger, had been a welcome client. He and his weretiger wife, Tricia, are a major power couple in Were circles. Shayla Masters is Tricia’s best friend. Frasier Wills and Leon had been some of Lily’s best clients.

Charles Schafer is the Souljacker and a vampire incarcerated in West Coast Psionic Asylum (WestCoPsi) for his crimes. In his human life, he had been an amazing tattoo artist. Terrance Schafer is his very rich father and an influential politician.

The vampires are…
…led by the Deadfather who has fingers in too many pockets with even more influence in our world. Greg Fallow had been Dani’s politically ambitious husband until he was turned. Now Greg runs Veek, a vampire club in the Underground and is the Deadfather’s right-hand man. Darrington is president of the United States.

The India Ink Club was informal, a group of friends who decided to get tattoos and include Rebecca who had been part of Dani’s coven and Hedge. Peter Trent had gotten a tattoo. Sunny Tramero is a half-Fae, rich frenemy. Ian Carter is a business mogul; his daughter, Isabel, has a great singing voice. Woodrow Blythe is the vampire who took over Greg’s senate seat six years ago.

White Tower Center is…
…the Supernatural equivalent of Pike’s Peak Market and one step up from the horribly seedy Underground. Hilda is an idiot with a clothing store. Bart is a nice guy who runs Little Bart’s Food Court. Ray Bender, a human, owns Bender’s Skin Art. Belltower Mae’s is a popular low-life brothel in the Underground.

Fam-Trad means a witch born and raised in a family of magic users.

The cover is red, black, and white. The main graphic is a black and white photograph of Lily and Archer (behind her) in black leather motorcycle jackets with the silhouette of bare-branched trees behind them, a white cloud rising up below them. More white appears in the author’s name and the info blurb that she’s a bestseller. The red is in Lily’s long, curling hair, the rest of the bestseller info, the scrollwork in all four corners, the series info at the very bottom, and a gradient of black to red in the title showcased in that cloud.

The title is the terror, the Souljacker who is skinning people to take back his tattoos.