Third (a short story) in the Toad Witch Mysteries cozy paranormal mystery series and revolving around a couple of witches — Mara and Gus — who happen to be housemates.

Miller’s take on Cupid is an interesting mash-up of many of the mythical tales about him. Miller certainly has fun with him! And that includes stories about Aphrodite and Hermes. It does make sense of why people fall in and out of love so fast.

Mara does toss in her theories about the gods. Oh, yeah, I gotta agree with her, but I’ll take it a bit farther and say they’re the worst of us.

Eros certainly is demanding for being a prisoner. Still, I think Paul is worse. Wait till you read the date scene with dinner and a movie. Anyone treated me like this . . . he wouldn’t be seeing me again. I don’t understand why Mara is so hung up on him!

We hear all about stolen chocolate through first person protagonist point-of-view from Mara’s perspective. That Gus sure is mean, hiding Mara’s chocolate and forcing her to eat oh-so-healthy. He’s right about the healthy, but leave a woman’s chocolate alone!

Paul is still schizophrenic about Mara and the baby. He does have a right to be paranoid after events in Somebody Tell Aunt Tillie She’s Dead, 1, but geez, he does go over the top!

Oh, boy. Forrest has experienced a 180 in who he’s attracted to. And he’s even creepier.

Ooh, Aunt Tillie gives Mara a bit more about her brother — a half-breed!

As you can tell, there’s plenty of action with some crazy characters. At least the pace is quick

Eros, the god of Love and Lust, is trapped in a cage, and Gus refuses to let him go. At least not until after his Lupercalia.

Meanwhile, Forrest has other ideas, but his past is catching up with him.

The pregnant Mara Stephens is a witch who only tries to do good, although she is definitely not a Wiccan. She inherited a sentient cottage from her grumpy, snarky, murderous Aunt Tillie who now resides in a skull on the mantlepiece. The gay, chameleonic Gus is her housemate and believes he is the be-all, end-all of witches. She has two Dobes: Aramis and Apollo. Gus “has” Lord Grundleshanks, the toad. Adele is Mara’s deceased mother.

Forrest is Gus’ last boyfriend; he’s also the Devil. Aphrodite is Cupid’s mother. Cupid is the god of Love and Lust.

The cover is a cartoon graphic with a black night fading to pale gray in the background against a blues-colored background of mountain and what appears to be a waterfall with trees in front of it and stars of magic. In the foreground on the right, Lord Grundleshanks, in a black witch’s hat, perches atop a tombstone with the Dobes to the left, overlapping with the long, dark, curly-haired Mara, wearing a cranberry smock top and light royal blue trousers and burgundy flip flops, lounging on a dog crate containing a red heart. At the top is the title in four parts: the top is a pale blue, the second line is white with the third and fourth lines in a bright yellow. The author’s name is in white at the bottom.

I don’t really understand the first four words of any of the titles, Aunt Tillie knows what Mara and Gus are doing, almost before they do. So, why have Somebody Tell Aunt Tillie We’re Kidnapping Cupid!? 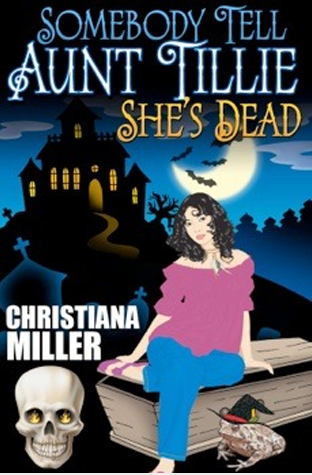