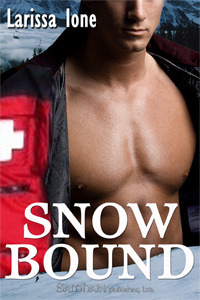 A contemporary romance focusing on Robyn Montgomery and Sean Trenton. It begins in Chicago and ends in a ski resort town.

This was cute, unexpected from the author of Demonica and Lords of Deliverance, but cute and just a tiny bit melodramatic. It’s also very clichéd what with the gorgeous guy who gets taken up by his celebrity. I think the celebrity aspect merely brought out the jerk in him. Then there’s the gorgeous hunk who thinks the “ugly duckling” is gorgeous herself, and he makes all the nasty bitches at the reunion jealous.

Why couldn’t Damon get his own interview with Rolling Stone? Why would Damon cancel her radio ads to “crush her” when he only fired her that weekend? As for “just having sex”…? Oh, please. So she has a fling with another famous guy who gets his face all over billboards. It’s a frickin’ fling! It’s not supposed to be important. Robyn just wants to have sex for gosh sakes. Not have a long-term affair.

I do like that Sean enters into the spirit of what Robyn needs, and that’s before Damon gets ahold of him. I also enjoyed his acknowledgement of his past sexual activity and that he wants something deeper.

Ione does a good job of stringing it out, holding back the knowledge of what truly did happen. I also liked her characterization of Sean. He is such a sweet guy, even if he is concerned about getting back into sports. Robyn. Well, Robyn bugs me. I can certainly understand why, but geez must she be so true to life? I can’t believe I just said that…

“…that ten years later, you still act like you’re in high school.”

I can understand how a lifetime of childhood torments can affect your perspective for the rest of your life, but I can’t understand her letting her non-relationship with Damon color how she sees Sean. For one thing, Sean isn’t anything like Damon from the start. And it’s only a weekend!

Ione working up to both characters baring their souls was nicely done with great rationalizations. Exactly the kind we need to pump up our own courage! That and ignore your parent(s) when they’re stupid.

It’s Sean’s big chance, announcing the ski competition on national TV, and he won’t let anything mess that up. Not even his need to get past this dry spell.

Robyn can’t count on her boyfriend’s word, and now she’s in big trouble. Just when she really needed to make a big impression.

And Damon? He’s got a multitude of nefarious plots going.

Robyn Montgomery is a successful radio station music director who is supposed to be coordinating the auction for her high school reunion. Her parents, Gretchen and her dad, own Hausfreunde, a bakery in her hometown. Her parents bought the old Delaney hunting cabin. Greg (he works for an airline) and Joe are her brothers. Karen is her best friend now.

Sean Trenton was an Olympic competitor in skiing until his accident. Now he’s an EMT and works ski patrol at the resort. Norbert is his cat. Todd Davis is his best friend and one of the very few who know the truth. Shelley and Miranda are his younger twin sisters. His mom is a fourth grade teacher; Dad coaches college football. Samantha is his agent.

Fellow students from Albert McKinney High School include…
…Gigi Anderson — Sean sees her as a cougar, Robyn sees her as one of her cruelest tormentors along with Heidi, Felicia, and Janice Hunter. Rochelle Saxony had been okay. Robyn is supposed to be working with Linda on the auction.

Earl is a bartender at the Moosehead Pub. I think Patrick is part of the patrol. Mitch is a six-year veteran. Jason Freeman is a fellow commentator. Ski-Do funds ski trips for at-risk and underprivileged kids.

Damon Slade is her jerk of a boss — and her ex-boyfriend — who owns a big chunk of Mogul Media. Lisa is his? the station’s? secretary.

Jenny was Sean’s disastrous girlfriend. The mega-pierced Freak is the guy Karen hooks up with.

I get cold looking at this cover. Oh, Sean’s open red ski patrol jacket and that glimpse of his naked chest is hot enough, but then I think ski, and I get chilled all over.

The title reflects what happens before the reunion when they’re Snowbound.