It’s either a short story, 3.5, in the Witches of Gales Haven paranormal series (or fourth) and revolving around the Gawama family in the town of Gales Haven. The focus is on Shawna and Luanne confronting their runaway sister, Neorah.

I greatly dislike Neorah. She has no regret at leaving her daughter behind. Then she goes out and has herself a passel of children, never bothering to contact her family to let them know she’s even alive. And all she really wants to do is dump her kids off in Gales Haven and then leave. Again.

That was some chase scene, slipping across into cartoon world. And through all of it, Neorah is totally nasty. And then she wants everyone to welcome her. I don’t think so!

Ashta uses third person dual protagonist point-of-view from Luanne’s and Shawna’s perspectives. And I don’t blame their reactions one tiny bit to their boorish sister.

I must say that I was surprised how much happened in this short novella. It’s the characters who drive the action, which is totally unexpected. Although not as unexpected as Neorah.

It’s been years, decades, since Neorah ran away. So imagine Luanne and Shawna’s surprise when they stumble over her, only to have her ignore and then flee from them.

Gales Haven, a small town, is a magical sanctuary which operates on a barter system. No one with magic could get in. That includes the Internet, which means no WiFi either. Dale is the owner and mechanic of Cars, Clues, and Canaries. Mabel runs Mabel’s Medicinal and Restorative Herbs for Healing and Relaxation with products such as Shroom Groove and Loopy Woopy Zoopy. Hopper Haddles is obsessed with the theoretical workings of the magical world. There’s Beebee’s Beer Bar. Bab the Baker expressed a wish that the town’s centuries-old barrier spell be modified. It’s a barrier that has a constant guard of witches, wizards, and magical creatures. Irma Lamont‘s abilities include transportation magic. Stella Egerton and Darnell Adams. Danny is Shawna’s “buddy. Billy, Bradley, and Dillon are currently dating Luanne. Brosnan is a leprechaun.

Gawama Mama House is . . .
. . . the family home of the Gawamas. Bessie Gawama, Nan, is the matriarch and on the council. Jowelle is the oldest sister, who loves to cook. Shawna “Shaw” and Luanne are two more sisters. Pixie is the name of their be-flowered hatchback. Together, the four could combine their magic for greater effect.

Neorah was the baby who ran off; she was also Marla’s mother, a daughter she left behind. Now she has a brood of redheaded children: Darla, fifteen-year-old Hawk who opens up portals and is fascinated by anime, and Duff who is a toddler.

Hell’s Valley is a neighboring town with more frills than Gales Haven.

The cover is primarily fuchsia and purple. The purple is the actual background with a candle in its candlestick and a pile of books flanking the fuchsia cloud of sparkles surrounding the open book with its pages flipping. At the very top is the series info in white. The title is below it in a smaller turquoise font. At the very bottom is the author’s name in a black shadowed white.

The title refers to those Smexy Shenanigans that makes life worth living. 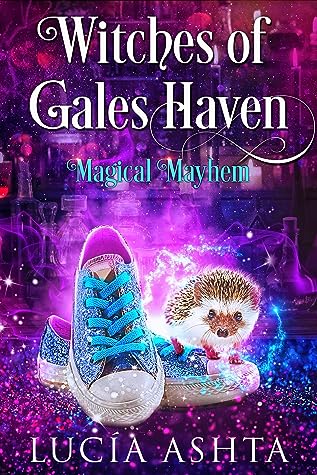