Buy on Amazon
Goodreads
Also by this author: I Shall Wear Midnight, The Light Fantastic, Sourcery, Mort, The Shepherd's Crown, Guards! Guards!, Moving Pictures, Small Gods, A Blink of the Screen

Second in the DEATH subseries and eleventh in the overall Discworld satirical series revolving around a planet that is flat and carried through space on the back of a turtle. A really big turtle. The focus is on DEATH and his coming death.

Reaper Man starts off with the Morris Dance, but I don’t really see the connection. Yeah, okay, it’s Pratchett. There never has to be one, and he does go on about the other dance.

It’s all about existence, whether you’re alive or dead…and I have no idea how shopping carts, a.k.a., trolleys, fit into this. Nor the purpose of those buzzing swearwords. Although it is funny how the wizards suddenly try to cut out the swearing. Unfortunately, there’s only so much room and excess energy any world can take, and that energy has to go somewhere. With Terry Pratchett’s imagination, even the sky isn’t a limit.

And, here we go on page 11 with those mayflies whose entire life cycle takes 24 hours, ROFL:

‘You’re right there. We had proper sun in the good old hours. It were all yellow. None of this red stuff.’

Pratchett does like to poke fun at everything, and this one is one of my faves. The parents who always had it worse/better in the old days. Pratchett then swings to the millennia life cycle with the Counting Pine and goes at it again, before he sets in on old professors moaning on about how the world is going to pot.

Ah, ambitions. Especially that wizard who doesn’t want to give up Windle’s rooms. I mean, the fellow’s dead, ain’t he? What’s he need with his rooms just because he won’t die all the way?

Says it all about them wizards at Unseen U:

“‘It can’t be intelligent, can it?’ said the Bursar.

‘All it’s doing is moving around slowly and eating things,’ said the Dean.

‘Put a pointy hat on it and it’d be a faculty member,’ said the Archchancellor.”

Mmm, you’d be guessing right if you assumed this was third-person omniscient point-of-view what with all the thoughts we’re reading. DEATH is evolving with his observations of behavior as he plunges into finally experiencing life. His panic. His hangover. Learning compassion. Windle evolves as well, becoming more appreciative of the little things in life. Poor Reg. Even the Death of Rats has his moments.

I don’t know how he does it, but Pratchett yanks in every myth, superstition, stereotype from “playing kettle drums and doing that bimbo dancing all night” to “making him pass water”, er, I mean “running water” to vampires who need hemogoblins to “contracting genetics” to new-fangled gadgets that’ll never catch on, and more. The miraculous ability of a mind to regenerate after giving so many pieces of it away. The unnaturalness of, shock, taking all your clothes off to have a bath??!

Oooh, anti-crime… Nope, it’s not what you’re thinking. This is more along the lines of breaking-and-decorating, whitemailing…and worse!

Yeah, I can see that. Snowglobes as eggs to hatch cities.

In the end, it’s all about the harvest.

They say there are only two things you can count on …

But that was before DEATH discovered the sands running out of his own timer. Seems he’s developing, ahem, a personality. Can’t have that.

It’s rather sudden, this concept of time running out for him, and DEATH abandons his job and sets off to spend his time as he chooses.

But like every cutback in an important public service, the lack of DEATH soon leads to chaos and unrest — literally, for those whose time was supposed to be up, like Windle Poons.

The oldest geezer in the entire faculty of Unseen University — home of magic, wizardry, and big dinners — Windle was looking forward to a wonderful afterlife, not this boring been-there-done-that routine.

But there will be no fresh start without DEATH, and Windle and the rest of Ankh-Morpork’s undead and underemployed set off to find DEATH and save the world for the living (and everybody else, of course).

DEATH is the Grim Reaper we all know. And fear to see coming to our door. Binky is DEATH’s pale, living horse. They’ll let DEATH keep him. Albert is his now-depressed human servant. The powers-that-be have had to outsource with DEATH out of the picture, so we have the Death of Rats, SQUEAK, and the Death of Fleas. The new DEATH is a prat.

Bill Door finds work as farm labor with Miss Renata Flitworth. Ralph? Rufus?, a smuggler, had been her fiancé. Nancy is the pig. Cyril is the cockerel with dyslexia. Lifton is the landlord at the local inn; Sal is his daughter. Other villagers include William Spigot, Gabby Wheels, and Duke Bottomley (his brothers are Squire, Earl, and King). Ned Simnel is the inventive blacksmith. Iago Peedbury has a field in which they test Simnel’s latest.

…the most cosmopolitan city on Discworld where anyone is welcome…as long as they have a return ticket. The Shades is its worst neighborhood. And that’s sayin’ somethin’!

Unseen U is…
…the wizard university of Discworld based in Ankh-Morpork. Windle Poons is the oldest wizard in the entire faculty.

“It occurred to him that for most of his life he’d been an old man. Didn’t seem fair, really.”

Mustrum Ridcully is the current Archchancellor obsessed with hunting, dressing as he pleases, getting roaring drunk, jollying people along…and jogging! The Dean who discovers how much fun it is to ignore the rules. Yo! The Librarian is a wizard who was transformed into an orangutan. The Bursar obsesses himself with paperwork and doesn’t need to worry about assassination. Who would want his job? Other wizards include the Lecturer in Recent Runes and the Senior Wrangler, who is the leading philosopher. Modo is the dwarf gardener. Unseen U insists on a lying-in period for wizards after the embarrassing affair of Prissal “Merry Prankster” Teatar.

The Fresh Start Club is…
…a support group for the undead started up by Reg Shoe, a mortuary worker. Members include Brother Arthur Winkings, er, no, I mean Count Notfaroutoe, a lower-middle-class wholesale fruit and veg merchant, and his wife, Sister Doreen, oops, Countess Notfaroutoe, the keep-up-with-the-Joneses vampiress; Brother Schleppel, a very shy bogeyman; Brother Lupine; Brother Gorper; Sister Drull is a ghoul; and, Brother Ixolite is a banshee with a speech impediment.

Sergeant Fred Colon is of the Ankh-Morpork City Guard, the city’s policing agency. Captain Doxie is with the City Guard Day Watch. The Patrician, Lord Vetinari, rules the city. Captain Douglas is with the Guard.

Cut-Me-Own-Throat Dibbler, he says he’s a merchant adventurer, but he’s really an itinerant peddler with lots of get-rich schemes, providing he can steal the products and cheat the customers. Detritus is the odd-job troll at the Mended Drum, a tavern. The tale of The Amazing Maurice and his Educated Rodents provide the truth to the tale of the Pied Piper. Druto Pole is a florist with an order to die for.

Mrs. Evadne Cake is a small medium feared by all religions. Her daughter, Ludmilla, turns into a werewolf. Must be something to do with Great Uncle Erasmus. One-Man-Bucket is her spirit guide, and yes, it’s the old joke about what the mother first sees on looking out the teepee.

The Chief Priest of Blind Io is the senior priest of the senior god on Discworld and therefore the religious spokesman. He’s also Ridcully’s brother. Other religious leaders mentioned include the priest of Offler the Crocodile God, the high priest of the Cult of Hinki, the Archdeacon of Thrume, and the scandalized Reverend Welegare. Guilds include the Alchemists, Geoffrey is the General Secretary and Chief Butt of the Guild of Fools and Joculators, and the Assassins.

The auditors of reality are…
…supposed to be a group mind — think accountant. Azrael is the sky and appears to be the boss.

Discworld is a flat planet carried on the back of a turtle who swims through the galaxy.

The cover is black with a fossilized gray stone arched window with a deep sill. Leaning out the window is a golden skeleton with sly eyes wearing a straw hat and bib overalls, one hand resting on an hourglass. In the black background of the window is the hook-nosed, white-bearded, red-and-black-pointy-hat-and-dark-red-robe-wearing Windle Poons, the wizard who cannot die. The title is a bright yellow across the top while the author’s name is at the bottom in white.

The title is a chance to try a different life as the Reaper Man with a different kind of harvest. 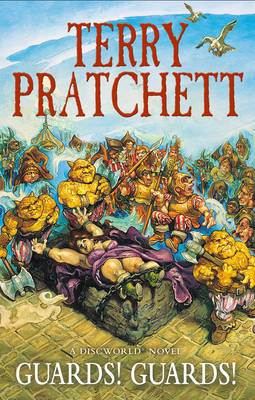 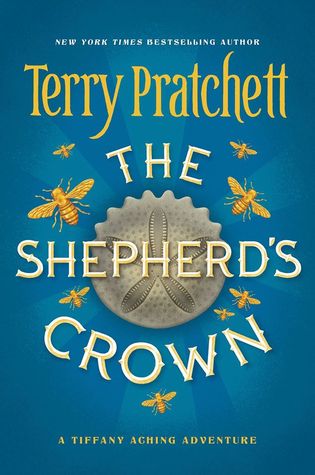