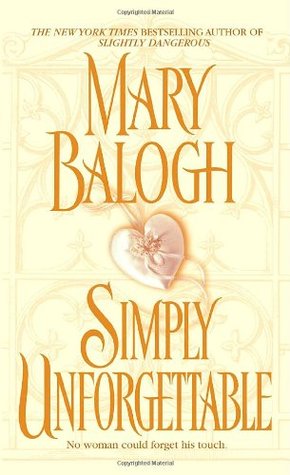 The first in the Simply Quartet historical romance series and revolving around four teachers at a girls’ school in Bath. This is a sequel series to Balogh’s Bedwyn Saga. The couple focus is on Frances Allard and Lucius Marshall, the Viscount Sinclair, and it’s just after Christmas.

Overall, Simply Unforgettable was a fun read, light and fluffy, as long as you can ignore the odd mix of 19th century mores with 20th century expectations — a thinly veiled shell for today’s women. Balogh followed certain strictures on women and completely ignored others of the time while Lucius was definitely a 20th century kind of guy.

Then there are the I’m-not-good-enough along with the I-can’t-possibly-tell-you tropes, although Balogh puts a slight twist on them both, so they’re not terribly annoying. It was annoying how Balogh kept stringing it out as to why Frances couldn’t return to London, and I did have to appreciate how tenacious Lucius was.

Frances did drive me nuts with how she can’t make up her mind. She doesn’t want to see him, she can’t possibly see him, so why didn’t he try to see her? She’s such a wimp for trying to run from happiness, for hiding, and yet, as Lucius discovers, she’s also quite brave. Now if only she’d be brave enough to tell him the truth. I do wish she’d gotten on with it!

There are a number of pluses in this. Miss Martin’s school sounds like a dream come true! The teachers are encouraging of their students, tolerant of fun, and enjoy each other’s company. Frances’ papa sounds like the ideal father. He spent time with her, encouraged her interests, and yet protected her. A little too well, perhaps. Those great-aunts were a treat, and I adored how appreciative Lucius’ family was for talent and wit and how the Marshalls rally to Frances.

Okay, so Frances’ coach moved at a snail’s pace. Why is that such a problem for Lucius? He can be such a twit! That first offer he makes Frances does show his impulsive side. What does he think Frances will do when he tires of her? That intimate meeting Lucius has with Portia… If that doesn’t scare him straight and realize the truth, I don’t know what would. It certainly provides a strong counterpoint to what it’s like with Frances, seeing the humor in a situation and able to lose themselves in the fun of the day.

The saving of Simply Unforgettable was the intelligence of both protagonists in this sweet tale of a man discovering that he wants passion in all aspects of his life while a woman realizes she has forgotten what her father taught her.

A ferocious snowstorm throws together a young teacher with a secret past with the black-caped stranger who comes to her rescue. Stranded together in a country inn, Lucius Marshall and Frances Allard share a night of glorious, unforgettable passion. But Frances knows her place.

It’s that past that will keep her from following her heart. That and her determination to make it on her own that returns her to her teaching position at Miss Martin’s School in Bath, where Frances must try to forget that one extraordinary night.

But Fate refuses to let up and throws the two together again and again.

Frances Allard is a young music, creative writing, and French teacher at Miss Martin’s School for Girls. All the family she has left are her two great-aunts, Miss Gertrude Driscoll and Mrs. Martha Melford, in Mickledean in Somersetshire where they live in Baron Clifton’s dower house at Winford Grange. (He’s a cousin somewhat removed from Frances.) Hattie is their personal maid. Thomas is the great-aunts’ ancient coachman driving their even more ancient coach. Her father, a French émigré, fled the Reign of Terror.

Lucius Marshall, the Viscount Sinclair, is the heir to the Earl of Edgecombe, his grandfather. Peters is his coachman. I do enjoy Peters’ character, lol, although I should think he was more likely to be Lucius’ groom. Jeffreys is the ill valet Lucius sent on ahead. His mother is a widow. His oldest sister, Margaret, is now Lady Tait with three children. Caroline (about to be engaged to Sir Henry Cobham), Emily (making her come-out this Season), and Amy (she’s not yet out) are his other sisters. The late Rebecca was the earl’s wife and she had been best friends with Mrs. Melford.

Miss Martin’s School for Girls is…
…located in Bath and run by Claudia Martin (she had, for a very short time, been governess to Lady Freyja Bedwyn, Slightly Scandalous, 3). The other resident teachers include Anne Jewell (she’s a miss *shock* with a son, David), and Susanna Osbourne (penmanship). Mr. Keeble is the elderly porter. Mr. Huckerby is the dancing master. Mr. Upton is the art master. Mr. Hatchard is Miss Martin’s London agent.

Mr. Aubrey Blake is the physician on call for the school, and he’s quite interested in our Miss Allard. Mrs. Lund is his sister. Mrs. Barbara Reynolds and her husband have a daughter, Betsy, who is a day pupil at Miss Martin’s. Mrs. Abbotsford’s children, Rose and Algernon, enjoyed sea bathing. Miss Jones is at the Assembly. Mr. Gillray is Mr. Huckerby’s brother-in-law.

The prissy Portia Hunt is the perfect English lady whom everyone expects Lucius to marry. Her parents are Baron and Lady Balderston; her grandfather is the Marquess of Godsworthy, one of the earl’s oldest and dearest friends. Charles is the Earl of Fontbridge; his mother is the bitchy countess. George Ralston promotes people. Lady Lyle had been a mistress to Frances’ father.

Roderick, Baron Heath, is a music patron who recently married Fanny, the mother of his most recent discovery, a young boy soprano.

Mr. and Mrs. Parker are the innkeepers who are away. Wally is the servant they left in charge.

The cover has a pale yellow background with an embossed tracery of wrought iron. Shaded in a very pale peach, it gives the impression of a window from which hangs a swaying ivory and peach embossed heart suspended by a ribbon with a cluster of ribbons and flowers in its center. The author’s name and title are in an embossed deep muted peach.

The title is what Frances and Lucius are to each other, Simply Unforgettable.