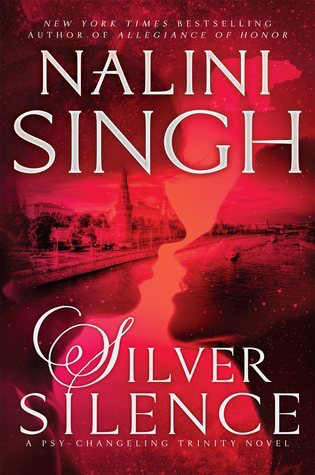 First in the Psy-Changeling Trinity follow-on series from Singh’s Psy-Changeling universe and revolving around three races: the Psy, the shifters, and humans. The couple focus is on Silver Mercant and Valentin Nikolaev. If you’re interested, there is a chronological listing of the Psy-Changeling books on my website.

Yep, it is an insightful series name, for it’s a new age for Psy, humans, and shifters, a tri-way struggle to achieve equality, trust, and peace for all.

The theme is love whether it be Silver coming to understand and love, Valya’s tremendous capacity for love for Silver, his family, his pack…all of ’em, Ena’s love for her granddaughter, Arwen’s, Valya’s family…and more.

But a counter theme is greed. Yes, there’s hate in there as well, but the prime mover is greed with the Consortium willing to disrupt, murder, and destroy to improve their bottom line.

It’s an interesting contrast: the sleek and sophisticated Silver versus the brash bear. With Singh using third-person subjective point-of-view, we get to hear the thoughts of a number of characters…and I do see this POV as much warmer.

What I don’t buy is this insta-romance. Oh, no, Silver does fight it, but she falls in too easily. I like getting to know her, but she’s always been so cold and matter-of-fact, and now she has no real problem adjusting to Denhome. She easily accepts touch. Maybe it is because of her family line’s historic passions and their frequent gatherings, but c’mon, they’re still Silent. This still doesn’t work for me.

Val dares her into sex, and she’s curious enough to want to challenge her Silence and understand what the act is all about. If Silver is ”discovering the craving of power of want”, why isn’t Singh making us feel this?

”’Bears are handsy.’ They hugged like it was going out of business and threw each other around for fun. ‘…but I can’t promise the same for the littlest cubs.’”

I did love the bears, and it was a fun switch from the more … sophisticated?? … leopards and wolves. That bit about Krycheck importing a huge cask of beer to force the bears to sit down and discuss cracked me up. Singh follows this with the anecdote that describes bear curiosity when they had to see for themselves that Krycheck was in love.

I can understand human anger. As we learn of all the nasty crap the Psy pulled on humans…I wanna kill someone! Those Psy don’t deserve to survive. And the Psy won’t now that the truth behind the Net’s disintegration is revealed.

I love this epigraph: “Betrayal is a rusted sword that wounds long before the first cut is made.”

Singh does a good job of the tease. All the hints about Silver’s debilitating “other” ability and the innuendos about StoneWater’s brokenness.

If those bears who left thought that Valya would be like his father, why weren’t they considering his grandfather’s character as well?

These hate groups. They see nothing wrong with killing humans to get what they want. They’ll go after Silver, but then object when Ena threatens to go after their children. They call her a monster??

It can’t be family. It can’t be. The Mercants are famous for their familial loyalty. But no one else has had access to Silver’s apartment.

Bowen and his people have their own tragedy bearing down on them. The chip that was supposed to protect them from Psy influence is killing them. And it’s too late to take it out.

And Valya has been coddling the broken until a near disaster forces him to issue an ultimatum.

Silver “Starlight” Mercant, a telepathic Psy with a debilitating secondary ability, is her grandmother’s heir, Krychek’s senior aide, and the new coordinator of EmNet, the Emergency Response Network.

Ena “Grandmother” Mercant is the head of the shadowy and powerful Mercant Clan. More family includes Ivan, a cousin who works in building security; her brother, Arwen, is the empathic one who holds Silver Silent and has probably kept the Mercants mentally stable all these years as well; Lillya, another cousin, is only twelve; Hunter is very ambitious; and, Aunt Ada. Adina Mercant had been an infamous poet who went to jail for stabbing her lover. Silver’s great-grandfather had been a human engineer who loved his Psy wife. Aunt Rose was great-grandfather’s youngest sister.

Silver Silence sees the evolution of the EmNet as an organization with Erik Jahnssen, a former sergeant and human engineer with a spinal injury who had led military search-and-rescue teams, as one of Silver’s new hires.

Valentin Nikolaev, a.k.a., Mishka, Valya, Valyusha, recently became the Alpha of the StoneWater bear pack in Russia; he holds a master’s degree in psychology. Zoya Vashchenko had been the previous, temporary, Alpha. His mother, Galina Evanova, roams as a bear, having flipped out when his father, Mikhail Nikolaev, proved to be severely flawed. Kirill had been Valentin’s grandfather when the pack had been its strongest, claiming almost all of Russia; Anzhela is his wife.

The StoneWater bear pack claims…
…half the city of Moscow and the territory that borders it. Denhome is home base. Anastasia “Stasya” is Valentin’s sister and his second-in-command. Evanova “Nova”, his second-eldest sister, is a healer and an M.D. mated to Chaos; and, Nika who is his third eldest sister. I think she’s Janika. Pieter “Petya” is his third-in-command. Pavel is one of the senior bears and a funny certified tech geek; he’s intensely interested in Arwen. Pavel and Yakov Stepyrev are identical twin great-grandsons of Déwei Nguyen, a Foreseer Psy who had mated a StoneWater bear when Silence was first imposed. Zahaan “Zasha”, Taji, and Inaraare also senior bears. Zarina Saarinen is head of StoneWater’s educational system and Zahaan’s mother. Devi is a runner.

I love how caring they are of the cubs who include Arkasha, one of the tiny gangsters; Dima, a.k.a., the Barnacle (he’s Nova and Chaos’ son); Fitzpatrick Haydon William; Svetlana Valeria “Sveta” Kuznetsov; Oksana and Irina who won’t wait forever; and, Olive and Mina are teens with an issue. More of the bears include Moonbeam, Chaos is a polar bear from Babuska Caroline’s birth clan and the head cook mated to Nova, Jane, and the very-pregnant (and human) Moira mated to Leonid.

The broken bears include…
…Fariad, Ilya, Marik is one of the teens, Sergey is their leader and had been Mikhail’s second; Artem “Tyoma” is their trainee healer and Sergey’s son whom these bears are letting down; Enja is Sergey’s mate; Jovan; and, Laine.

Nina Rodchenko is the manager of Club Moscow. Victoria is a maître d’ Valya knows.

Kaleb Kyrcheck is a dual cardinal Psy, probably the most powerful Psy on the planet. He’s married to and warmed by Sahara Kyriakus. Lenik is the next senior aide and is not happy trying to take on Silver’s tasks with Krycheck.

Krychek had been part of the previous Psy Council along with Nikita Duncan and Anthony Krychek who are now part of the Ruling Coalition. Sophia Russo, a J-Psy, and Max Shannon, a human in charge of Nikita’s security, are married. Ming LeBon, Shoshana and Henry Scott, Marshall Hyde, and Tatiana Rika-Smythe had been evil Psy on the now-defunct Psy Council.

Rico Cavalier gave Silver a gift. Monique Ling is Silver’s human neighbor who works with Jai Shivani. The Dancing Frog Bar was hit. Arwen has made a couple of friends of empaths, but they don’t know who he is: Jaya in the Maldives and Ruslan, an archeologist in Russia.

The Americans
Ashaya (mated to Dorian Christensen, a leopard sentinel), Designation M with the ability to manipulate genes, and Amara Aleine (a psychopath who behaves for Ashaya) are twins and brilliant Psy scientists. Samuel Rain is another brilliant scientist who worked in experimental biofusion. Dr. Edgard Bashir is the surgeon who will operate.

Lucas Hunter, the alpha for the DarkRiver cats, gets a mention. Malachai Rhys is security for BlackSea.

The Arrow Squad is…
…led by Aden Kai. Vasic Zen is a one-armed born teleporter.

The Empathic Collective is…
…an organization of E-Psy led by Ivy Jane Zen, Vasic’s wife.

The Trinity Accord is…
…the latest treaty in which Psy, humans, and shifters will be equal.

The Silence Protocol was…
…intended to eliminate, or at least slow down, the madness that afflicted too many of the Psy. Instead, without emotion, the PsyNet broke down, splitting into the NetMind and the DarkMind. The death of the PsyNet means death will follow for all Psy. E-Psy are empaths and all about emotion.

The Human Alliance is…
…based in Venice and led by a figurehead, Giovanni Somme, who is very loyal to Bowen. It’s Bowen “Bo” Knight, their security chief, who is the real power with more and more businesses adding the Human Alliance logo to their own. Lily Knight is his sister and the EmNet liaison for the Alliance. Neha is Bowen’s highly qualified assistant. Phoenix is one of Bo’s cousins and working on an engineering contract in Mozambique, and he’s just gotten mated to a StoneWater bear, Janika. Niall is one of theirs. Piero is a gondolier.

The Consortium is…
…a self-centered, loose organization of all three races who want to sow discord and reap the profits. Their “leader” is known only as the Architect. Is he also the Patriot?

HAPMA is…
…similar but all human, Humans Against Psy Manipulation. Ya can’t blame ‘em. David Fournier is survival trained.

The Patel Conglomerate is…
…a human-owned corporation. Akshay Patel is their CEO whose wife was psychically raped. Vahan is his son.

The all-reds cover is kind of creepy in an artistic way. I’m going with the Volga River with several boats steaming away, the banks lined with park-like spaces and beautiful buildings, a starry sky above. But what catches your attention is the lighter red smoke that I suddenly realized was actually a human body at the bottom morphing into a bear at the top, Ursus perhaps? The author’s name (at the top) and the title (at the bottom) are in a debossed metallic silver with the series information at the bottom in white.

The title should really be a possessive of that Silence, for it’s Silver[’s] Silence that is the issue.