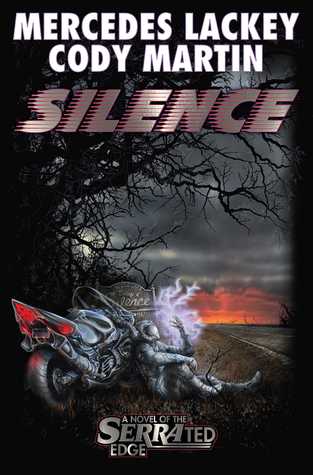 Ninth in the SERRAted Edge paranormal fantasy series — this story is very Young Adult, and part of the overall Elves on the Road urban fantasy series. The series began around a group of elves fascinated by race cars; Silence has a different focus.

If you’re interested, there is a chronological listing of the overall Elves on the Road books on my website.

I can not even begin to believe Staci’s father. His ex has never been reliable or safe for Staci to be around, and he’s packing her off??? He should be reported to Child Services! What a hen-pecked namby-pamby! How does he even make it as a lawyer?? I have to admit that Staci does play him well, as she should. The jerk. I don’t think much of Staci’s New York friends either.

Besides the lack of reception, Silence is the most depressing place. Everyone slumps about, mumbles that nothing can be done. The only real work is at the cannery.

Luckily, Staci picks up with the gamers — it’s that need for Internet access, lol — and there’s a definite curiosity from the kids about what the Blackthornes get up to. They’ll never be invited, as they have “nothing to recommend” them, but they are fascinated and repelled by Staci getting an invitation.

There’s a lack of effort put into Silence with the story rolling along without any great dips of emotion or tension, well, other than how nasty Brenda is and events with the Blackthornes, but even that takes such a long time to get somewhere. I guess what annoyed me the most is all those opportunities to pump up the drama that were smoothed right over. Staci definitely annoyed me with how much time Lackey/Martin spent telling us that she was worrying that Sean didn’t like her. Oh, woe *eye roll*. It certainly wasn’t helped by Dylan assuming that Staci would fall right into playing undercover agent (when Lackey and Martin could remember). Not even Tim’s attitude is all that believable. If he truly felt as he says, why is he even in Silence?

Silence has a mild tension throughout with my main curiosity being why it’s such a depressing place so far back in time technology-wise. I can’t imagine having to live somewhere without Internet access!! As for the ending. What??? Huh??? Staci at least does learn the value of true friends and how to tell the difference.

Teenager Staci’s father has just remarried, and now she finds herself being shunted aside by her new stepmother. Shunted all the way to the run-down and dying Maine town of Silence, in fact, and the custody of her alcoholic mother.

It gets worse. Silence seems to be stuck in the proverbial stone age. There’s no cell phone service except at the very top of a bluff outside of town, no internet except dialup, and not one familiar franchise or business. Staci’s mom seems to have gotten even worse since the last time Staci lived with her. The only bright spots in the whole place are a friendly waitress at the diner, and a bookstore where she meets a gaggle of geeks and gamers.

But all is not as it seems in Silence. There are strange things moving beneath the shabby surface, terrible plots in play, and deadly players in the game, and Staci is about to find herself caught up in the middle of it all.

Anastasia “Staci” Kerry is a senior in high school who is suddenly forced to leave her home in New York City. Her drunk of a mother, Paula Kerry, is a waitress at the Rusty Bucket in Silence, Maine. The lecherous Pete (his name is actually Patrick) is Mom’s current boyfrien’. Melinda is Mom’s friend. Her father, is a lawyer who has recently remarried. Brenda is the false stepmother, all sweetness and nice until she’s got that ring on her finger. Tommy is Brenda’s precious son.

Dylan ap Gwynnerian ap Griffud is an elf of the Emerald Thorn clan who has broken with Fairgrove Industries and now works as a private investigator. Metalhead is his elvensteed who prefers to be a motorcycle.

Silence is…
…a town stuck in the 1950s with a curfew. There’s only dial-up Internet with cellphone reception up on Makeout Hill.

Tim owns the bookstore where the gamer/geek nerds hang out: “Jedi” Seth has the ubergeek Force Knowledge to help Staci get set up. Wanda is Goth girl. Riley, the redhead, and Jake are a couple.

The Blackthornes are the premier family in Silence and live out on Gray Oak Hill. The heir, Sean, is a senior at the local high school. More of the family includes Meaghan, Brigit, Patrick, Ian, Caelen, Finn (he is not a team player), Siobhan, Niamh, Morrigan is a cousin with an interest in Goth, Liam, Connor, Niall, and Aengus. Bradan is Sean’s father. His particular cronies include Ryan Dubghail, Lynch Collins, Nolan Gearlait, and Stewart Casey. Padrick is the family chauffeur. Harris is a butler or footman. Hunter is muscle.

Ray owns and cooks for the Diner, the main place to eat in Silence. Beth Phillips is the easygoing waitress. Reverend Franklin and his wife, Eloise; Fred and Thelma Krause; and Joe and Evelyn White put on a once-a-month barbecue for teens at the First Methodist church.

Krupke is a cop who hired the young thugs.

Kenning is a type of magic which allows elves to duplicate anything they want.

The cover is almost pitch black with a flaming, wavering red, far in the background with more red outlining the letters in the gray metallic title and the series information and around the white letters of the authors’ names, and reflecting off the back end of Dylan’s motorcycle, which you can barely see in the bottom left where it’s tucked under the black silhouette of a bare-branched tree. Dylan is leaning against his parked bike, mesmerized by the electrical pulses sparking from his gloved left hand.

The title is both the town and a metaphor for its citizens, for all are in Silence about progress and the missing.

Book Review: The Robin and the Kestrel by Mercedes Lackey