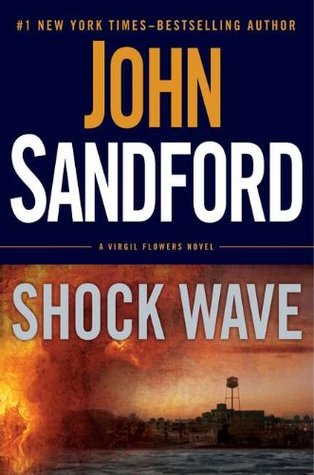 Fifth in the Virgil Flowers detective mystery series and revolving around that effin’ Flowers over there in Minnesota. It’s been six months since Bad Blood, 4.

Virgil cracked me up with his response to Pye’s threats at the start. Who cares? *snicker*

A lot of us can relate to the Butternut Falls issue. Having a big box store open up in town, killing off the local businesses, providing lots of minimum-wage jobs. Throw in those environmental issues…and it’s war with the most obvious protesters the hunters and fishermen.

Oh, man, the tips in here: Sandford did an interesting bit on the psychological escalation of the bombmaker mentality. It was a bit obvious, but extremely believable. Barlow notes that “most profiles are ninety percent bulls**t”. Lee’s comments about how her consulting in Hollywood works was fascinating. I had no idea they even did that much “blending”! Haden says he plants marigolds to deter the moles.

I do like how Virgil detects. He tells everyone a lot of what the police find and goes around town soliciting opinions from everyone. Then there’s George’s idea: doing a survey. I thought it was a good idea… Then Virgil comes up with that coding idea. Good ‘un.

“That’s where most of him was. His head was over there — popped right off, like they do.”

I had no idea there were such differences between trout, muskie, bullhead, etc., fishermen…*more laughter*…

I loved it when Ahlquist got on O’Hara about the language. She’s only partly sorry for it.

The superstore chain PyeMart has its sights set on a Minnesota river town, but two very angry groups want to stop it: local merchants, fearing for their businesses, and environmentalists, predicting ecological disaster. The protests don’t seem to be slowing the project, though, until someone decides to take matters into his own hands.

The first bomb goes off on the top floor of PyeMart’s headquarters. The second one explodes at the construction site itself. The blasts are meant to inflict maximum damage — and they do.

Who’s behind the bombs, and how far will they go? It’s Virgil Flowers’s job to find out…before more people get killed.

Living in Mankato, Agent Virgil Flowers is a roving detective for the Bureau of Criminal Apprehension. His background includes a stint with the MPs, a degree in ecological science, and a Bible-thumping childhood. Today, he loves to write articles for various magazines — including the New York Times, and he loves the challenge of solving cases, getting out from behind the computer. He’s in a long-distance relationship with Sheriff Lee Coakley (Bad Blood). David is one of her kids. Johnson Johnson is a friend of Virgil’s; he runs a custom sawmill.

The Bureau of Criminal Apprehension (BCA) is…
…a state police agency where Lucas Davenport is Virgil’s boss. Jenkins and Shrake are the resident thugs. And they crack me up. Sandy is their part-time researcher. Hendrix. Jack Thompson is good with electronics. Gabriel Moss will handle the disk drives.

Ruffe Ignace is a reporter at the Star Tribune. Thomas Shaver is a federal judge in Minneapolis.

… a small town in Kandiyohi County in Minnesota that is about to get a PyeMart. Jack LeCourt. Mable Bunson’s Restaurant and Cheesery is the main restaurant in town. Larry is a reporter with the Clarion Call. Harvey Greene owned the limousine. Lawrence, who knows about workshops, works at Home Depot. Kiki Bjornsen is a bookkeeper with the Butternut Outdoor Patio Design Center. Thor is an eighteen-year-old desk clerk at the Holiday Inn. That boy is goin’ places, lol. Jim Paulson owns the Soaring Center. Gretchen, Frank, and Retrief work at Butternut Scuba. Doug Mackey, the local golf pro by summer, schoolteacher the rest of the year, has a good tip.

The City Council
Geraldine Gore is the mayor; her husband, Dave, sells golf carts. The councilmen who were for PyeMart include Arnold Martin, a stock manager at a car parts place; Burt Block who runs a temp service and employment agency; and, Pat Shepard. Jeanne is Pat’s angry wife. Marilyn Oaks and Carol Anne Moore are Pat’s girlfriends. Bernice is Jeanne’s friend. Edwin Kline, the town pharmacist, had been one of those against.

Kandiyohi County Sheriff’s Department
Sheriff Earl Ahlquist likes the camera; his wife is an unhappy realtor. Deputies O’Hara (did a tour with a Black Hawk unit), Tom Mack (two tours in Iraq), and Jimmy with Jeneret as the chief deputy have their turn in the story. Helen is a clerk. Shirley Good Thunder is the prosecutor, and Theodore Wills is the county attorney and Shirley’s boss. Bill Check is the public defender. Tom LaRouche is a defense attorney. Coral Schmidt is the stenographer. Dick Pruess will be Virgil’s temporary assistant.

Jim Barlow and David McCullough are with ATF. Tim is a bomb guy. Doug Mason and Charlie are computer techs.

PyeMart is…
…a Walmart-type store looking to expand. Willard T. Pye owns it. Marie Chapman is his “court reporter”. She follows him around and writes down every word he says. Angela “Jelly” Brown is Pye’s executive assistant. Sally Humboldt is in food services. Harry is a Pye driver. Bob Brown is the head of security and Barrett Newman runs the Pye Pinnacle building systems. John Dunn is an expediter. Gilbert Kingsley is the construction superintendent. Mike Sullivan is the civil engineer. Mary Sullivan is his wife. Donny Clark will replace Sullivan.

Suspects include…
…Ernie Stanton, redneck, hard worker, and owner of two fast-oil change places; Don Banning runs a clothing store; Beth Robertson runs the Book Nook; Greg Sawyer; Lyle McLachlan; Bill Barber; Gordon Wilson is a car salesman at the Ford dealership; and, Dick Gates is a power-hungry wildlife officer. Fishermen include Larry Butz, a trout guy who owns a jewelry store; Cameron Smith is a wet-fly man and the president of the local trout-fishing club; and, George Peck, the local photographer, is more dry and does love his antique fishing everything — he nominates himself on the survey.

Henry Erikson is a trout guy, likes to build nice guitars, and works at the Chevy dealership. Sarah is his wife. Ron is the manager at the dealership. Ron Mueller is Sarah’s brother.

Butternut Technical College is…
…a two-year technical college. Jesse Card is the lead instructor in the metal shop. John Haden teaches; Barbara is his ex-wife. Bill Wyatt is getting divorced from his wife, Jennifer. Billie is their daughter.

Mary Trail is Virgil’s insurance agent. Andy at East Coast Marine has what Virgil wants. Mark Douka with Xavier Homes provides Virgil with a possible motive for the bombings.

The cover makes me think of Turner’s light with that gorgeous glow coming off the painting. It’s as though there’s gold foil underneath that fiery sky, billowing smoke roiling through the oranges over the city skyline. That’s the bottom half. The top half is a deep, deep blue with the author’s name in an embossed deep gold and bright white.

The title is a consequence of physics: there is a Shock Wave when a bomb goes off.