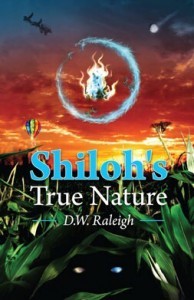 When twelve-year-old farm boy Shiloh Williams is sent to stay with his estranged grandfather, he discovers a mysterious new world inhabited by ‘Movers.’ The Movers live in symbiotic harmony with one another, except one extremely powerful Mover who has stolen the town’s most precious artifact, the Eternal Flame. Shiloh investigates his supernatural surroundings, makes new friends, and begins to think of the town as home. However, just as soon as he starts to fit in, he realizes his newfound happiness is about to come to an abrupt end. One decision and one extreme consequence are all that remain.

I suspect this could be the start of a fantasy series for middle-grade readers, and it could be fun! I get the impression this is set in Massachusetts.

This ARC was provided by Hobbes End Publishing in exchange for an honest review.

My Take
There are rough edges in Shiloh’s True Nature, and the over-emphasis on the environment is a message that got hammered in well before Raleigh ended the story. I did, however, enjoy reading this one. It’s a unique twist on magic with a strong dash of socialism. One of the few instances where it actually works. How cool is that!

I like the relationship Shiloh’s parents have. His mother is supportive of her husband, and she doesn’t hesitate to throw out the cheeky comments, lol. Crow’s commentary on how his people view his gift is quite sad.

Part of why I think Raleigh plans this to be a series is all the loose threads flapping around in Shiloh’s True Nature. Why doesn’t the gray flower ever get explained? I kept reading and reading… I kinda thought we’d get confirmation on why the farm is doing so well. And what happened at the end? Where are his parents? Why is his dad so hostile to Doc? What was with the hostile harvesters on the road? Why is Luther so obstinate about getting his toe fixed? Doesn’t anyone ever make the connection between the farm doing well and then not, the Stone Balloon, the improvement in the water? Or am I jumping the gun with my overactive imagination? Hmmm, considering what happens to Bryce, I must be… Why is it so important that the Eternal Flame is in only one spot? If the farm is doing well, why can’t his dad pay his farmhands?

Hmm, Doc has a good philosophy about presents. And too true I’m afraid.

“Everything new can seem magical until you’ve learned about it. Then it becomes as real as everything else you already know…”

While most of the rough edges are in those loose threads, others include what I think of as a rough flow. For all his demands to go home, by the second day, he’s smirking about those demands. And it isn’t until later that we learn why he’s changed his mind. It’s symptomatic of other instances in which the characters tend to jerk forward. I guess I don’t like having the cart before the horse. Then there are the norms that I would expect to be observed — and I can’t say what they are without giving away the ending — and is another example of those rough edges. I must be getting old.

Their utopia, Fair Hill, sounds lovely and all those gadgets…oh, yeah, I wanna get my hands on those! The houses sound intriguing with trees as the corners of a house or as the house or growing up through it. Did I mention the electricity? There isn’t any. It’s a throwback to a more idyllic time when kids got to be kids and everyone is cherished. And they are kids with all the mischief that kids can get up to, and since it’s Fair Hill, some of that mischief can be…quite…unique.

It’s a bit harsh, that you can’t visit unless you’re a Mover. Seems this will be Shiloh’s last chance to visit his grandfather in his own home.

Can’t get too excited about playing Atmosphere, although the effects sound amazing. And Waterfowl sounds boring.

Seems Movers are inflicted with idiots to the same ratio as Normal people. Idiots who think their abilities entitle them to what they want.

It’s a fun, kids’ story in a remarkable village of warm and caring people with just enough conflict to create a storyline. I also suspect it could be a good teaching book for parents who want something fun to read to their kids and incorporate discussions about the environment, Native Americans, and friendship. There’s a great opportunity to discuss bullying, and an even better series of comments about each person being important for what’s in his heart and head.

“The foundation of all knowledge is the realization that you don’t understand something.”

The Story
Shiloh is a sweet boy of twelve with the dreams of such a young man: swimming with his friends, playing games at the carnival, just kickin’ it. Then he spends an eye-opening two weeks with his grandfather, Doc.

It will be Brinda’s insistence on payback that starts the crash for Shiloh, and Haines’ greed that puts a finish to it.

The Characters
Shiloh Williams is a farm boy with two weeks of vacation to look forward to! Lovie and Cheepie are the cats his grandfather gave him years ago. Joe and Mary Williams are his parents, and they refuse to give in and sell their farm to bullies. Rikki and Peco are the unpaid farmhands, who live in the old horse barn.

Doc is Joe’s father, Shiloh’s grandfather, with a gift for healing. What with one thing and another, well, it’s been years since they’ve seen each other. Peggy and Isis are his winged horses. Screaming Crow is his grandfather’s best friend and always seems to be around for meals, lol. His gift is interaction with animals. There are two ravens who keep on eye on the world for him.

Fair Hill is…
…a community of Movers, people with magical gifts. Regina is the town magistrate. Saige runs the local bookstore, Jeremiah’s (do read the description of the storefront — too much fun!), and she gifts Shiloh a copy of True Nature. Luther and Martina Miller are Bud’s parents. Luther specializes in knots, puzzles, devices, and fixing the Stone Balloon. Henrietta makes the best preserves, but has arthritis with one of her hands. Jasper and Jasmine Jackson are farmers with a sick horse, Lucky.

The kids
Bryce is Saige’s teenaged son who shows Shiloh how to play Atmosphere. Harmony is Bryce’s cousin. Brinda (her gift is water, and she lives with Mina and Maximo, the twins who talk funny), Bud Miller (air is his gift; Jace is his older brother), and Kaz, oops, sorry, Kazuhiro Watanabe (he came to live with Regina, his godmother, so he could learn to control his gift of camouflage), are more friends Shiloh makes.

Arcadia is the games center in Fair Hill. Deer Park is a restaurant in the treetops that overlooks a park filled with friendly deer. The Stone Balloon is an acoustic sundial.

Acacia Street is…
…where the Haines family lives. Avoid it if you want to live. Samuel Haines is the jerk who operates the factory next to the Williams’ farm. Junior is his son. The Mothman is part moth, part man, and works for Haines.

Movers manifest on their thirteenth birthdays, the age of ascension, with the most outward sign being two differently colored eyes. Each has a special gift, and many prefer to live in Fair Hill where they aren’t persecuted. “The Prime Mover was a special Mover who lived long ago and saved the world from total destruction.” The Eternal Flame is an actual flame of unknown origin with everyone having their own ideas about it.

Prodigian Ostriches are the largest birds in the world with an odd gait in their locomotion. Cyclopean Beetles also serve as vehicles. Mondo Frogs can put you to sleep. Moon Whales. Present Trees provide what you need. Torchbugs eat mosquitoes and provide light. The Crosskut Caves are said to be dangerous. A Funus is the Movers’ funeral rites; the Revenant is a carved wooden boat used much like a Viking funeral.

The Cover
The cover is lurid in deep colors of red, orange, and green with the Eternal Flame centered on the cover above the grass. Four objects surround it in the sky, metaphors for events within the story. Be wary, however, of those bi-colored eyes lurking deep within the grass.

The title is what both books are all about, Shiloh’s True Nature.