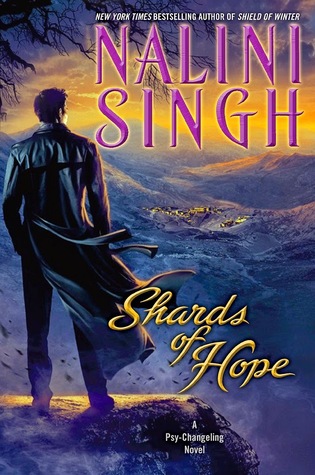 Buy on Amazon
Goodreads
Also in this series: Wild Embrace

Fourteenth in the Psy-Changeling paranormal romance series and revolving around three dominant races in an alternate world. The couple focus is on Aden Kai and Zaira Neve in the year 2082. It’s been four months since Silence fell, 103 years since Silence was implemented.

Wow, this Aden is so incredibly patient!! He and Zaira have loved each other forever, well, okay, since they met as children in the conditioning torture chambers of the Arrows. And he’s only ever been supportive, letting Zaira set the pace, even if it is a glacial one, lol. There were times I wanted to smack Zaira upside the head…but I was afeared!!

You do have to wonder if Zaira is right about her genetic history. Jesus. The violence is overwhelming, and yet, again, there are those Shards of Hope Singh sprinkles throughout. And the Psy children are learning how to play.

It’s been a fascinating journey through this alternate world as Singh terrified us with the power of the Psy, their ruthlessness. As she slowly revealed truths about the Psy and the Changelings, individual vulnerabilities and strengths. What holds each together as a race. The tremendous contrast between the emotionless Psy and the loving shifters.

It’s through the stories of individual characters that we learn the culture and beliefs of each. Zaira’s memories of her childhood that surface in reaction to events are a horrifying example of those stories. Beyond horrifying. The reactions of the adults around that young Zaira only prove how terrible Silence is. The horror is enforced by Blake’s thoughts on Silence and the worries and fears of the older Arrows.

“I won’t be like them. I won’t use threats or pain to keep you from doing what you want.”

With each story, Singh reveals growth: inter-racial, individual, packs and families, and it’s been a whopper of a ride. It’s a slow growth that has only sunk into me consciously in Shards of Hope. Singh’s overwhelming repetition of the main characters’ troubles camouflaged my realization of that growth. And because her show is right on the money, Singh pulls me right into these characters’ lives. I want them to be real.

“Trouble happens when people don’t believe they have a voice.”

I love that realization that Zaira has about love, how it’s a physical network connected by trust with potent, raw power.

It’s that evolving foundation of trust, one that has been building since the first story in the series, that screws events up for the bad guys. Who knew such a smart group of people could be so far behind the times? I am surprised at how stupid the Psy were as well. Why wouldn’t they have had the same insight on training as Zaira realizes when she encounters Tavish?

Oh, mama! Ivy Jane lays down the law to Nikita, ROFLMAO. I have to confess that the back history on why Nikita treated her daughter as she did set me back on my heels. It makes so much sense. Then there was my own bit of snarky laughter at Aden’s parents’ reactions to the Arrow Squad’s rebellion.

There were a number of progressive segues in Shards of Hope: new alliances; the recent Psy marriages; insight into trusting, caring love and family; and, Zaira and Aden.

It’s also a beautiful insight on raising children. The love, the trust, the punishments. It’s so heartening to read of Aden and Zaira’s thoughts and how quickly their dream is coming together. The hope, the reassurance Zaira gives Beatrice was beautiful.

It’s all about communication and trust. Besides, how can you resist a quiet plea for a hug?

And their disappearance is wreaking havoc throughout the world.

The protective Zaira Neve, a Gradient 9.8 telepath, is a combat Psy, a senior commander who was horribly destroyed by her childhood and her sadistic parents.

Aden Kai leads the Arrows and is their greatest hope despite his weak gift — a Gradient 4.3 telepath with a minor 3.2 M ability. His parents, Marjorie Kai and Naoshi Ayze, were truly Silent and part of the rebellion even before they “died” five or six years ago.

The Arrow Squad were…

…an elite group of Psy assassins created at the start of Silence and originally led by Zaid Adelaja. Now free of Ming Le Bon, they perform humanitarian rescues and “weeding”. Vasic Duvnjak is a Tk-V, a born teleporter, able to think of your face and find you. He’s also Aden’s best friend. He’s married, bonded and saved by Ivy Jane (Shield of Winter, 13), an empath and now the leader of the Empathic Collective. Their marriage brings hope to the Arrows. Rabbit is Ivy’s pet dog. Samuel Rain has been working on a prosthetic arm for Vasic. There are five Arrows who know the truth about Aiden’s power: Zaira; Vasic; sniper and trainer Cristabel “Cris”; the steady Amin, a telepath; the deadly Axl; and, Walker Lauren with an ability similar to Aden’s. Nerida has a telekinetic power. Edward and Irena are senior Arrows with issues. Jaya is an empath mated to Abbot, a Tk. Stefan now lives on Alaris, an undersea base. Tamar. The narcissistic Blake Stratton is a senior Arrow who has hidden his psychopathy. Beatrice Gault is a strong telepath trainee with an ability to create illusions and smash shields.

The Valley is…
…where Aden hopes to bring his people back. Tavish and Carolina are some of the Psy children learning to trust this new world.

Venice is a base for…
…a safe house for Arrows targeted for elimination. Alejandro is a damaged Arrow who only remains stable when he’s around Zaira. Mica and Yuri are Zaira’s lieutenants.

The Psy is now…

…led by the Ruling Coalition: Krychek, Anthony Kyriakus, Ivy Jane, Nikita Duncan, and Ida Mill. Lizbeth Schäfer heads up a large humanitarian group, Hope Light, who had reached out to help everyone when the Net infection exploded.

Kaleb Krychek, a dual Cardinal feared throughout the Psy world, and Sahara Kyriakus provide more hope to the Arrows (Heart of Obsidian, 12). Silver Mercant is Kaleb’s senior aide with her primary task acting as liaison between all three races in an emergency.

The Kyriakus family group…
…is led by Anthony Kyriakus, an F-Psy, father to Faith and uncle to Sahara.

The Duncan family group…
Nikita Duncan, a former Councilor and Sascha’s mother, is its ruthless leader. I’m thinking she and Anthony have somethin’ goin’ on… Sophia Russo, an ex-Justice Psy, is her aide. Sophia’s husband (Bonds of Justice, 8), Max Shannon, is a former cop and Nikita’s human security chief. He has successfully stood up to Nikita!

The Liu family group,…
…along with the Chastains, had thought to enslave naive Es. Jen Liu leads the family and is ruthless.

The Chastain family group is…
…led by Kalani Chastain who closely follows the Lius.

The Marshall family group is…
…led by Pax Marshall, a Gradient 9 telepath and grandson to the assassinated Councilor Marshall Hyde (the family honored him by changing their surname to his first name). Pax is poaching young Psy.

The Rao family group is…
…based in India and led by Payal Rao. They have an intensive interest in energy.

The Mercant family group deals…
…in information and stays in the shadows. Ena Mercant, a.k.a.,Grandmother, leads the family and had been invited into a group of “visionaries”.

The vicious psychopathic Ming Le Bon, a former Councilor, once led the Arrows, used them as his personal death squad, until they were no longer of use, until the rebellion succeeded. His area of influence is Europe. Kurevni is a greedy shill.

Shoshanna Scott is another former Councilor who lost standing.

The Forgotten are…
…descendants of the Psy who dropped out of the PsyNet 103 years ago. Devraj Santos is their leader; Katya Haas is his wife (Blaze of Memory, 7). Aubry is a vice-director. The children were lucky that Tag and Tiara were close enough to respond.

The Anti-E Brigade is…
…led by the bigoted Ida Mill.

Pure Psy was…
…a fanatical group.

RainFire is…
…a new pack in the Smokies led by Remington “Remi” Denier, a leopard shifter. Finn is their healer. Hugo is their nurse. The nosy and diplomatic Lark, Angel, and the quiet Theo with a marshmallow for a heart are his sentinels. Jojo is a young cub whose trust provides insight for Zaira and Aden about children and family. Jasper is a cub who gets lost.

DarkRiver is…
…the leopard pack we’ve known from the beginning. Lucas Hunter is the alpha who has acted as Remi’s mentor; he’s mated to Sascha Duncan, a Cardinal E (Slave to Sensation, 1). Tamsyn “Tammy” is their healer and married to Nathan, Lucas’ senior sentinel (Enchanted Season: “A Beat of Temptation”, 0.5). Faith NightStar, an F-Psy foreseer, is mated to Vaughan, a jaguar shifter (Visions of Heat, 2). Ashaya Aleine (she’s mated to Dorian; Hostage to Pleasure, 5) and her psychotic twin sister, Amara Aleine, are brilliant scientists.

SnowDancer is…
…the wolf pack neighbor to DarkRiver and is led by Hawke, who is mated to Sienna (Kiss of Snow, 10). Judd Lauren, Walker’s brother, is an Arrow who “disappeared”. Now he’s mated to Brenna, a wolf shifter (Caressed by Ice, 3). Marlee is Walker’s daughter; Walker and Judd are uncles to Toby and Sienna Lauren. Riaz is one of Hawke’s lieutenants, mated to Adria (Tangle of Need, 11). Riley and the six-months pregnant Mercy are mentioned (Branded by Fire, 6). Lara is their healer. Drew gets a mention as well; he’s mated to Indigo (Play of Passion, 9).

Father Xavier Perez and his church are a meeting point.

The BlackEdge wolves are…
…led by Selenka Durev and have a diversified economic base. Gregori is a senior lieutenant.

The Human Alliance is…

…led by Bowen “Bo” Knight who is also their security chief.

…a combined group plotting behind the scenes to rule the world. Hashri Smith is a merchant in Singapore who runs an import-export business.

Silence is a protocol embraced by the Psy that forbade any emotions in the hopes it would save them. The PsyNet is a worldwide psychic network into which all Psy — except the renegades — are connected, able to reach out to and by any other Psy. Empaths are the Psy who had been lost; now they are the glue that holds the Psy together through the Honeycomb. The NetMind is both guardian and librarian of the PsyNet. And it has a DarkMind. Empaths (Es) heal souls, hearts.

Aerie trees are big enough to build homes in. Halcyon is a highly addictive drug that works on all three races and affects long-term memory.

The cover is an eye-catching combination of purples and yellow, as Aden, in his long black leather coat, stands above a valley nestled between purple mountains, the sun setting in a brilliant yellow, lights pinpointing the homes of Arrow families.

The title is what Aiden and Zaira have, Shards of Hope that they can survive, that the Arrows can be saved.

2 responses to “Book Review: Shards of Hope by Nalini Singh”