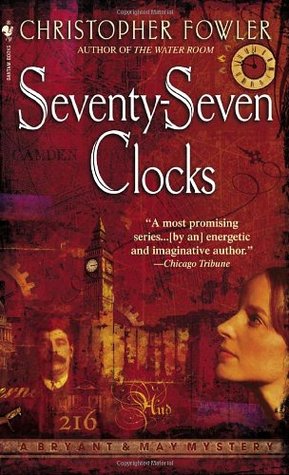 Bryant and May are up against a series of bizarre murders that defy human understanding — and a killer no human hand may be able to stop.

A mysterious stranger in outlandish Edwardian garb defaces a painting in the National Gallery. Then a guest at the exclusive Savoy Hotel is fatally bitten by what appears to be a marshland snake. An outbreak of increasingly bizarre crimes has hit London — and, fittingly, come to the attention of the Peculiar Crimes Unit.

Art vandalism, an exploding suspect, pornography, rat poison, Gilbert and Sullivan musicals, secret societies...and not a single suspect in sight. The killer they're chasing has a dark history, a habit of staying hidden, and time itself on his side. Detectives John May and Arthur Bryant may have finally met their match, and this time they're really working against the clock...

Third in the Bryant & May mystery series and revolving around two detectives with their own way of doing things in London. The case of the Seventy-Seven Clocks took place in 1973.

It’s a Gilbert and Sullivan opera all on its own, beginning with a clever but ruthless man who intended to ensure his family’s wealth through the centuries. It’s also an opportunity for Fowler to take the piss out of the upper classes and skewer the middle-class for their own greed and ambition.

It is curious how nicely Fowler manages to tie today in with cases that took place in the past. I find it a fascinating look back at how technology and detecting has evolved through the years.

There was a brief look-in at Victorian nipples in pre-Raff paintings, lol, a briefer summary of what the Gilbert and Sullivan operas were satirizing, a short history on the London Guilds, and the Whitstable history certainly provides a window into the history of the treatment of laborers and anyone not us.

Jerry sounds like a spoiled brat with abandonment issues, although I did not like the sound of her parents and figured Jerry had her reasons. Oh. Boy. Does she ever have her reasons. I can’t believe her mother laid all this on her all these years with this on her conscience. I’m not too thrilled with her father either. What a wimp.

Wait a minute. If Jack knows why Jerry was being sent to the therapist, why does he get so happy with her new job? As for that mother. Gwen blaming her daughter for all her antics when it was Gwen who set her own daughter up and then went into denial about what was happening.

Speaking of Jerry, I don’t understand why Bryant allowed her to get away with so much. It didn’t make sense. In fact, Jerry’s antics are more Keystone Kops, even though Jerry ends up being quite useful, and it does lead her to discover the truth about what happened when she was 14.

I CAN NOT believe the Whitstables. The cops are trying to save their lives, and they treat them like dirt! And those stupid Whitstables do everything they can to thwart the protection and then whine when another of ’em gets killed. The behavior of that little girl and the adults’ reaction to it alone is almost enough that I’d’a been tempted to leave them to their just deserts. Obviously it would only have been an improvement for the rest of us. Jerry does have that insight into the upper-class attitude the Whitstables throw out: “They can’t help it. They’re used to being deferred to.” But that attitude simply comes across as rude beyond belief.

I do love that Bryant pens them all up in Peter and William’s house and…gasp…they’ll have to make their own beds!

I do enjoy reading about the holidays and their original origins. How they were cleaned up by the Church. I must confess I like the idea of a “marvelously rowdy pagan celebration”.

It’s a confusing mess of ill-manners and theories that only gets worse when Charles Whitstable joins the story with his hints and comments.

A painting on loan to the National Gallery, The Favourites of the Emperor Honorius by John William Waterhouse, is damaged beyond repair by an elderly vandal clad in Victorian garb, setting off an international incident that threatens to derail the Common Market talks and draws Bryant into a series of bizarre murders — art vandalism, venomous poison, and an exploding suspect are only the start — at the Savoy Hotel.

Detective Inspector Arthur Bryant is the peculiar one, the one who dresses like a bum, has no social graces, kills technology, and has an elliptical, unorthodox approach to investigating. Alma Sorrowbridge is Bryant’s landlady; Hiawatha is her mongrel cat. Nathalie was the French fiancée who fell to her death years ago.

Detective Inspector John May is the fashionably dressed balance with his methodical research, gregariousness, and his intense interest in the ladies. They survive as a team, as the…

…Peculiar Crimes Unit because…
…their success rate is quite high. The unit itself was a special, experimental police unit formed during World War II to handle particular cases which required specialized handling, but soon evolved into those that were potentially embarrassing for the government. Today it is intended to be the Murder Squad within the Metropolitan Police and is based in Mornington Crescent. Sergeant Janice Longbright‘s marriage is off; Ian made her choose between husband and career. Dr. Oswald Finch is the pathologist who’s been with the unit since the beginning. Raymond Land is still their acting superintendent terrified of not closing cases and too much publicity. PC Charlie Bimsley is at the bottom of the food chain; his son, Colin, will end up working for PCU. More police constables include Kenworth, Burridge, Graham Watson, and Derek Brownlow.

Geraldine “Jerry” Gates is rebelling against her parents, afraid of the dark (since she was 14), and lying to her therapist. Gwen and Jack Gates are her social-climbing parents who expect their daughter to join the family firm. Dr. Wayland is the therapist Jerry’s mother insists she sees and the one who reports back to her mother on Jerry’s sessions.

Joseph Herrick is a dreadlock’d African-American with heavy motorcycle boots who has come to England to design stage sets for a new play. Kaneto Miyagawa is a patron of the arts and is the boss of the Tasaka Corporation in Japan, which is putting up the money for the play.

James Makepeace Whitstable was the founding father for the wealth of the Whitstables. Maximillian Jacob, a lawyer with Jacob and Marks (Leo is the partner) in Norwich, is the family lawyer for the Whitstables: William; the drunken Peter, a major; and, their unmarried sister, Bella, who is on the outs with her brothers. She’s a member of a society, the Savoyards, that supports Gilbert and Sullivan operas. Oliver Pettigrew, an estate agent, is one of the Savoyards.

More of the family include Alec and Beattie Whitstable with their son Royston Carlyle; Mina Whistable is bedridden; Edith Eleanor Whitstable, the daughter of Charles and Rachel, is an outsider and a contemporary of Mina’s; Samuel, Edith’s husband, died of cancer; Jack and Harry are their sons; Steven and Jeffrey are Harry’s sons and live with their grandmother; Pippa is worried about her horse, Gawain; Nigel is worried about his sweater; and, Susan.

Charles Whitstable is based in India and appears to be the head of the family. Berta is his mother. Delilah is her granddaughter. Michelle Baskin is nanny to Daisy Whitstable. Her stepbrother Tarquin has already been packed off to boarding school. Isobel is their mother; Luke, the son of Oliver and Peggy, is Daisy’s father. Christian and Deborah chose to stay home with their children, Justin and Flora.

“We are a dynastic fam’ly. Aristocratic British stock. Traditional values. We obey the landowners’ creed: If it’s attractive you shoot it; if it’s ugly you marry it.”

CROWET is…
…an acronym for the Committee for the Restoration of West End Theatres. Peggy Harmsworth née Whitstable (and Daisy’s grandmother) was a co-director.

The Alliance of Eternal Light was…
…James Makepeace Whitstable’s creation and included Radford, Lamb, Chambers, Suffling, and Hagith. Today it is a philanthropic trust. Rajeev was James’ Indian servant.

Nicholas is the jerk with whom Jerry works at the Savoy. Sandra is a waitress for the shareholders meeting. George Stokes and Bill Wentworth (he’s actually a warden) are two of the National Gallery guards. David Carreras is the Australian minister for the arts. Leslie Faraday is the newly appointed junior arts minister and has absolutely no clue about art. James Smith and Sons sell custom canes. Maurice was Major Whitstable’s usual barber. Eric is the stand-in. Andy has quite the underhanded business going.

Peregrine Summerfield is an art historian and friend of Bryant’s. His wife, Lilian, left him. Mr. Reg Lugsea is Bryant’s very knowledgeable butcher; Phil is his apprentice. Maggie Armitage is the Grand Leader of the Camden Town Coven. Maureen, Nigel is the resident numerologist, and Katherine (call her Freya these days) are part of the coven.

Mrs. Denjhi is flabbergasted at the actions of her husband, David.

The cover is a deep rusty red blackening at the edges with a London map superimposed on top of it along with odd bits of swirls and clock hands. There’s a clock at the top right, kitty-corner from Big Ben and its tower with a ragged silhouette of Westminster. One mustachioed face stares out at us on the left, while on the right, a woman, in profile, is looking up.

The title refers to the Seventy-Seven Clocks required to run the abomination.

One response to “Book Review: Seventy-Seven Clocks by Christopher Fowler”