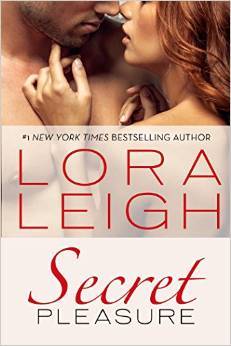 This book may be unsuitable for people under 17 years of age due to its use of sexual content, drug and alcohol use, and/or violence.
Buy on Amazon
Goodreads
Also by this author: Twin Passions, Shattered Legacy, Intense Pleasure, Knight Stalker, Enthralled, Rule Breaker, "The One", Nauti Angel, Nauti Seductress, Wake a Sleeping Tiger, Collision Point, Cross Breed, One Tough Cowboy, Hot for the Holidays, Dawn's Awakening, Strong, Silent Cowboy, "Night Hawk"

I felt rather lost in this story, primarily because of Alyssa. I’ve been reading about her as a peripheral character throughout the Bound Hearts series with whispers about her mysterious association with the Sinclair Men’s Club, and we suddenly get the scoop on her in this non-linear narrative that jumps all over the place time-wise — very annoying.

I also felt lost because I had skipped (not on purpose!) reading this one before I read Intense Pleasure, 14. Don’t do it. Read this in order at least to keep one character in the right head space for yourself.

The theme is love, at both extremes. Margo realizes she can love, and Alyssa, Sebastian, and Shane have a different, binding love. One that ‘Bastian’s grandfather recognizes, although Leigh doesn’t take advantage of that knowledge to make us feel the loss even more. There’s Gia’s version of love, Harvey’s, and even Summer’s.

Naturally, a horribly dramatic conflict arises, which wasn’t all that believable. Just another of the many not believable situations in this.

It’s a good thing that Leigh told us how sensual Alyssa was, but I wasn’t seeing it. Nor did I buy how easily Sebastian and Shane seduced her. With her mother’s strictures surrounding her all her life, I did not get the impression she was so easy. Not at eighteen years of age.

The whole “break-up” was too simplistic, although I can see why Leigh would use it to create drama. Why not simply remove the cameras? After all, the boys’ families waited three days.

That end bit when Alyssa learns the truth about Sebastian and Shane…nah…her reactions didn’t ring true. They were so lame and totally opposite what I thought her character was like. Well, okay, I didn’t buy ‘Bastian’s or Shane’s excuses either.

Plot beats included Chekhov’s gun, the villain speech, and definitely the shoulder angel/devil as Alyssa vacillates back and forth.

Leigh’s left all sorts of unanswered questions from what is the reason Ian asked Alyssa to leave the Club? The annoying Margot. She sounds like a dragon. I know Leigh tells us that Summer is Alyssa’s best friend, but that doesn’t ring true either. You should be able to tell a best friend anything, not believe she’ll rat you out to your mother. Why would Margot think her daughter needed a caretaker? That bit about the cameras… This story is so full of weirdnesses.

I’m going with third-person omniscient point-of-view as we know the thoughts, feelings, and actions of many of the characters in Secret Pleasure.

It all began at Alyssa’s “coming-out” ball. A chance meeting with two hot men wildly attracted to their siren.

It continued over a summer vacation in Barcelona that quickly went tragic, and left Alyssa bereft, grieving, dead inside.

Alyssa Hampstead is overly eager to escape her mother’s control. Candy will be Alyssa’s assistant. Alyssa’s parents are the overly controlling Margot “the dark queen” Hampstead — why is she such a bitchy woman? — and newly elected Senator Davis Allen Hampstead. Why would her father allow this? Raeg is her father’s chief of staff; Crane is a bodyguard. Dr. Brennan is the family doctor; Lisa Shaw is a nurse. James is the Cook and don’t ever call him anything but “Cook”. Steven Richards is one of the grounds guards.

Sebastian “Goof” De Loren and Shane “Cowboy” Connor are cousins who like to share their women. Until they meet Alyssa. They also work as a team for the CIA.

Lucien De Loren is ‘Bastien’s oldest brother who breeds horses; Angel is their sister. Fernando is his grandfather. Alberto and Tabitha are his parents. Murphy Connor is Shane’s oldest brother who runs the family ranch in Texas. Lark is his sister. His parents are Gavin and Francesca (she’s a premier trauma surgeon).

The Colliers include…
…Landra who is aunt to Sebastian and Shane. Jeb is Landra’s son. The Colliers throw a Winter Ball every year.

Harvey Stanhope needs a beard. Marion is his mother; Leigh mentions a Marion as his father too??

CIA
Most of their friends appear to be agents with the CIA and/or members of the Sinclair Men’s Club. Summer “Belle” Bartlett is Alyssa’s best friend (Intense Pleasure, 14); Caleb is her older brother. Gianna “Gia” Bennett is the daughter of one of Margo’s friends and one of Davis’ supporters; Kevin Barkley is Gia’s illegitimate brother. Esteban Falcone will be Gia’s partner later. Millicent Raye is an agent, divorced, hunting a new (wealthy) man, and known for her hypocritical innocence.

Khalid Mustafa is a half-Saudi, one-time bastard prince, and his wife, Marty is former FBI (Guilty Pleasure, 11). Courtney Sinclair is Ian Sinclair’s wife (Shameless Embraces: “Shameless”, 7). Chase Falladay is a private investigator for the Club. Detective Allen is with the police…and a member of the Club.

The cover doesn’t really do the story justice since there are two men involved with the woman. Still, it is a sweet romance cover with ‘Bastian (or Shane) and Alyssa nude from mid-chest up — discreetly filmed over with a banner across the center with the author’s name in a red thin, sans-serif font. The same red appears in script in the first word of the title in the solid cream bottom third with the last word in the title in the same font as the author’s name, but in black.

The title is a misnomer, as it wasn’t a ”Secret” Pleasure at all.