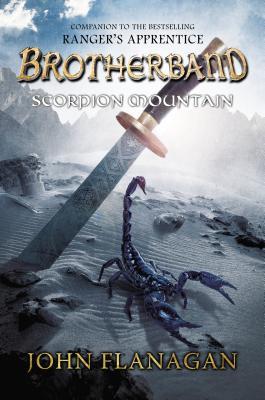 Fresh off of victory over their longtime nemesis, Tursgud, Hal and the Herons, summoned by King Duncan, set sail for Castle Araluen. Thrust into the dangerous world of Araluen, the Herons learn of a threat to Queen Evanlyn and whispers of a deadly sect known as the Scorpion Cult. Rumors say that Iqbal, who previously tried to assassinate Evanlyn at her wedding to Horace, might be planning another attempt. Not waiting to see if the knife will strike true, the Herons join forces with Gilan and his fellow Rangers to track down the would-be assassins.

Also by this author: The Tournament at Gorlan, The Ghostfaces, "The Beast From Another Time", The Caldera, The Red Fox Clan, Duel at Araluen, Return of the Temujai

Fifth in the Brotherband Chronicles adventure fantasy series for middle-grade readers. The story revolves around the young Hal and the equally young crew of the Heron.

Scorpion Mountain continues with the Heron‘s tour of duty along the Araluen coast that began in Slaves of Socorro, 4.

It starts off with such promise until Ingvar drops his bomb. Ingvar does raise some good questions, and I’m so glad that Hal took this seriously, though, I hadn’t expected Hal to solve this so quickly. I think Flanagan could have milked this drama a bit longer. He certainly had me worried!

Duncan’s roaring was certainly dramatic. Nor did it seem within his character. He already knows of the Heron‘s success in Slaves of Socorro, how can he possibly even consider making such a statement against Hal and his crew!?

Oh, lordy, Ulf and Wulf are smitten! And is that ever fun to “watch”! Ulf and Wulf are different in this one. Well, part of that is Ulf’s tragic event, but the twins are different in this. Flanagan allows us to see how much they care for each other and how much all that arguing is put on. Hal’s interaction with Geoffrey is cute, and an interesting possibility for the evolution of spectacles. Even if that last line of Geoffrey’s does sound a little too modern.

There are some surprises for both sides and a growing mutual respect as they learn each other’s skills. Makes me want to go back and start over again with The Ruins of Gorlan, 1. Of course, pretty much anything makes me want to re-read this series, lol.

Flanagan ensures the story is at the kids’ interest level with all those names they come up with for Philip Tinkytoes, er, I mean, Philip Daintyfin…wait, I know his real name is in here somewhere…

Lydia (and Cassandra to a lesser extent) are good role models for girls as well AND there’s some good role modeling for the boys in how well Lydia is accepted and needed by the Brotherband. Be warned, however, Hal does get harsh in a couple of spots. Nothing out of line. So to speak. It’s perfectly reasonable for what he needs, I’m just not used to him being this intense.

I think that part of what I love about Flanagan’s stories is that the kids are respected. It may not start out that way, but they prove themselves and the adults acknowledge this. I think the stories give kids reading these confidence, a hope that they can be taken seriously and respected for themselves as well if they are as caring, moral, and thorough as Hal and his crew.

It’s teamwork, support, and loyalty amongst the crew and their friends. Not a bad combination for your kids to absorb.

“‘The sea is moving constantly and you have to constantly make little adjustments to keep it all going smoothly. You can’t take it for granted.’

That Gilan is definitely a tricky one, lol, while Hal is quite the thoughtful (and hopeful) lad when it comes to distracting his Oberjarl. Kloof may live to strike another day, lol.

It’s definitely exciting with Ingvar’s challenge and all the sea and land battles the Heron and her crew must fight alongside Gilan. New cultures, new ideas, and new enemies to defeat.

The Heron and her crew are heading upstream to Castle Araluen and King Duncan, continuing their turn at duty, sailing and protecting Araluen’s shores.

Seems that more than Araluen’s shores need protection. The brother of an old nemesis of Princess Cassandra’s is hiring assassins to kill her off, and King Duncan wants to stop the danger at its source.

Hal Mikkelson is the quietly inventive skirl for the Heron. His mother, Karin, has been seeing Thorn. Oberjarl Erak rules.

The loyal crew of the Heron includes…
…Thorn Hookyhand, their battle leader who is still an amazing warrior in spite of his one handedness, and he’s a great mentor for Hal. Stig Olafson is his first mate; Stefan; Jesper is their sneak thief; Ingvar is huge and his strength enables him to easily load the Mangler even though his nearsightedness prevents his aiming it; Ulf and Wulf are the quarreling twins who act as one in trimming the sails; Edvin is their medic and chef; and, Lydia Demarek, a Sister in the Brotherband who is brilliant with an atlatl, has been with them since The Invaders, 2. Kloof is the dog they rescued from a mountainside outside Hallasholm in Slaves of Socorro.

The Wolfcall is Rugen Cloudseeker‘s ship. Agathe is the widow with whom Lydia lives. She makes Lydia go to the party. Rollond is the young man who’s been romantically interested in Lydia. Frieda is his fiancée.

The Rangers
Gilan is a Ranger in Araluen. Crowley is still the Ranger Corps commandant. And Gilan’s boss. Will Treaty is off with Halt and Horace on a special task in Hibernia.

Castle Araluen
King Duncan still rules. Lord Anthony is the King’s Chamberlain. I think Arthur is Lord Anthony’s assistant. Princess Cassandra, a.k.a., Evanlyn, is anxious to meet Lydia. Cassandra is also receiving death threats. Cedric and Farrer are Cassandra’s bodyguards. Geoffrey the goldsmith is very impressed with Hal’s inventiveness. Milly is the maid serving the crew in their castle quarters.

Devon Halder is a farmer plowing a field with Tom, his plow horse.

Wakir Seley el-then, a.k.a., Selethen, is an ally of Duncan’s and rules from Al Shabah, the capital of the province. He answers to the Emrikir. Kav al Bedin, master of the Gerbil, has a message for Gilan. Captain Rahim will command the landing party. Tabibs are the tribe’s healers, and Master Maajid is the best.

The Tualaghi tribe, the Forgotten of God
Yusal is reduced to a drooling idiot after Cassandra’s actions in The Battle for Skandia, Ranger’s Apprentice 4, and his brother, Iqbal bin Ha’rish, who now leads the tribe, is determined on revenge. Dhakwan leads a Khumsan, a company of 50 riders.

Philip the Bloodyhand, a Hellene, is the captain of the Ishtfana and has allied with Iqbal, and they’ve taken over the port city of Tabork. Kyrios is his first mate. Matlos, Davos, and Patrokos are some of the crew.

The cult of killers in Jabal Akrab, a.k.a., Scorpion Mountain
They worship the Scorpion goddess Imrika. Ushir is the first assassin. A tolfah is a contract that ends only with a death. Butrus ibn’Shaffran is a town dweller and messes up while on watch. The Shurmel is the leader of the Scorpion assassins. Taluf is an assassin the Shurmel has had to watch. Ranulf bin Shellah leads the squad of fifty to attack the Heron. Zafir al Aban is one of the tribesmen charged with keeping watch.

Ephesa was a major trading port that was abandoned by the Toscans. Tribes in the area include the Tualaghi and the Bedullin.

The Mangler is a giant crossbow Hall invented and mounted in the front of his ship.

The cover uses some chilly gray blues for a close-up of the rippling sand with its outcroppings of rocks and ruins as a nasty, big scorpion pauses under a beautiful damascened sword thrust into the desert sands, its guard and pommel of brass while in between, the grip is wrapped in leather. In the background, a range of spiky mountains rise up. The author’s name is in gold at the bottom, the title is a small script in red with “Brotherband” in an embossed and shadowed gold above it. In spite of those chilly colors, the blue sky and the sun flaring in the background gives this cover a warm feeling.

The title is their destination, Scorpion Mountain.

Book Review: “The Beast From Another Time” by John Flanagan