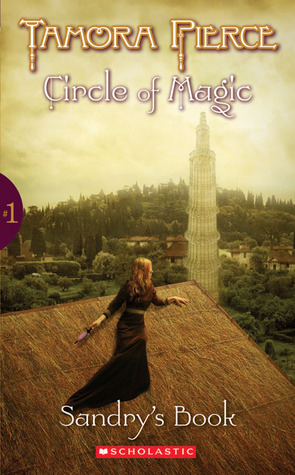 With her gift of weaving silk thread and creating light, Sandry is brought to the Winding Circle community. There she meets Briar, a former thief who has a way with plants; Daja, an outcast gifted at metalcraft; and Tris, whose connection with the weather unsettles everyone, including herself. At Winding Circle, the four misfits are taught how to use their magic - and to trust one another. But then disaster strikes their new home. Can Sandry weave together four kinds of magical power and save herself, her friends, and the one place where they've ever been accepted?

First in the Circle of Magic fantasy series for young middle-grade readers and the first in the overall Emelan series. It introduces us to the four young people making up this circle of magic.

I do wish Pierce had been more clear that Sandry has been put in this “prison” to protect her from… I don’t know… Smallpox? Magic? Do pay attention to the moss in Roach’s introduction to us; it’s a tip-off.

The main characters are unique from a variety of backgrounds. Sandry is such a perfect young lady. Intelligent, kind, accommodating, and fierce in accepting anyone from any social class. Daja’s case is sad, but she’s so bigoted! Tris. Poor thing. I can thoroughly understand her insecurities and anger. I think she’s been letting her tormentors off easy. Briar Moss is my favorite character as he’s so lively with a clever mind. I loved how Niko solved that bathing problem, lol.

I sure hope Staghorn is giving the same advice to the bitchy students in her dorm. Moonstream needs to be aware of how bigoted the Dedicates are, not just the boarding students. Those Dedicates running the boys’ dorm should be questioning why Briar needs those knives for protection! I do have to wonder about an establishment that allows students to be so nasty. WHAT am I saying? Almost all schools allow bullying.

Oh, too funny, and so very just! The duke renders judgment on the battle between the four and some boys in town who were torturing a puppy. It’s so very fair and weeds out the liars and bullies.

There’s a pivotal scene in which Sandry, Daja, Briar, and Tris must save themselves, and it will change their magic forever.

I think this story provides a TON of opportunities for discussion with your kids. It’s being supportive, teamwork, doing what’s right, identifying the wrongs. Talk about why those mean kids are so bad. Why it’s wrong to behave that way. Talk about how to counter this kind of bullying. Discuss how the kids can stand up for what’s right without becoming the subject of attacks themselves. OR how to survive these kinds of attacks. Who to talk to. Talk about why teachers and principals don’t stop this kind of behavior. Talk about helping your friends or how to help those being bullied. Talk about working together as a group, a team. Talk about leading. Following.

Sandry is in hiding, trapped in a locked cell, the only person who knows…is dead. Tris is tossed out like the trash. Over and over. Daja becomes outcast through no fault of her own. Roach, Briar Moss-to-be, is a thief who has been caught one too many times.

It’s Niko who discovers them, rescues them.

It’s these four who will wreak havoc on the Winding Circle with their magics.

The Palace of Black Swans, Zakdin, the capital of Hatar
The Lady Sandrilene “Sandry” fa Toren is in hiding from the mob as her world dies around her. Her only solace? Winding thread into light. Her parents were Count Matten fer Toren and Countess Amiliane fa Landreg, and they died of smallpox. One of her cousins is her Imperial Highness, Empress Berenene of the Namorn Empire. Pirisi is Traderfolk and Sandry’s nurse with some magic.

In the southeastern Pebbled Sea
Daja Kisubo is Traderfolk, but she’s been in a shipwreck and unknowingly discovers her magic when she coaxes the sakaru to her. But shipwrecks are bad luck, Daja will become outcast, a trangshi, and must carry a blank staff. She was close to being shunned anyway with her interest in metalwork.

Hajra, port city of Sotat
Roach is caught for the third time, and it means the mines or galleys or shipyards. He has a chance to shed the name given him by the Thief-Lord, and he chooses “Briar Moss“.

Ninver, a city in Capchen
Trisana Chandler is unwanted, cruelly taunted, and she takes out her anger in poltergeist-like activity. Aymery Chandler is one of her cousins, and he’s studying to be a mage.

Wrenswing is the leader of the latest order on whom Tris has been foisted.

Winding Circle Temple is…
…known for its learning and magic. The Hub is a tall tower which holds the magic that protects the temple. Master Niklaren “Niko” Goldeye is a mage whose talent is in finding things and people who are hidden. The leader in charge of the temple is Dedicate Superior Moonstream. Frostpine is a smithmage, one of the greatest, who wants to teach Daja. Kirel is his apprentice. Dedicate Initiate Crane is the first dedicate of the Air Temple and a rival of Dedicate Rosethorn (he’s related to Count Albannon fer Yorvan in Olart).

Discipline Cottage is…
…not a punishment place. It’s the home for two good friends who only accept mageborn in their cottage: Dedicate Lark with her weaving magic was an acrobat in her youth and Dedicate Rosethorn has her plant magic. Each resident gets their own room.

Liesa fa Nadlen is one of the nasty students in the dorm. Esmelle ei Pragin is the daughter of Baron Witten en Pragin and Colledia of House Wheelwright (a merchant house). Dedicate Staghorn runs the dorm in which Tris initially is placed. Dedicate Quail resides at the Pearl Cup dormitory for the wealthier students.

Wave Circle Temple in Ragat
Honored Huath is its leader and has condoned potentially harmful magic.

Traders are merchants and seem to be an ethnic group. Mimanders are Trader mages. Trader Koma is the Trader god of deals and rewards; Bookkeeper Oti is his wife. Kaq is a very rude word that means non-Traders. Saati are true friends, a real honor among the Traders. Dedicates are the men and women who choose to be part of a temple. I think Bags are people in positions of authority.

The cover is golden with its pale gold sky, the mountainous horizon of the tree-filled hill with the houses scattered on its slopes. The pale gold Hub rises up out of the center of the Winding Circle temple grounds with the thatched roof of Discipline cottage in the foreground. It’s Sandry in her black mourning clothes, a spindle in her hand representing her magic, standing on the roof, looking back at the temple grounds.

The title indicates the character on whom Sandry’s Book focuses.