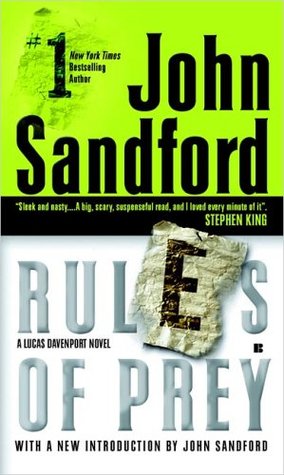 The "maddog" murderer who is terrorizing the Twin Cities is two things: insane and extremely intelligent. He kills for the pleasure of it and thoroughly enjoys placing elaborate obstacles to keep police befuddled. Each clever move he makes is another point of pride. But when the brilliant Lieutenant Lucas Davenport--a dedicated cop and a serial killer's worst nightmare--is brought in to take up the investigation, the maddog suddenly has an adversary worthy of his genius.

My Take
Wow, truly excellent. Davenport is a slightly crooked cop but he does it to protect, to take out the bad guy. He writes games and makes a really good living from their sales, so why he stays a cop I don’t know. But Sandford makes it really real with a protagonist you love. He is at least honest in his way and provides excellent insight into how police really appear to work.

I love that Davenport collects poetry, that he creates video games, how he develops the games. All sorts of issues I’d’a never thought of. I like how real he is. He cares about people — and visits the track. He’s honest with his women as well, although that deal he makes at the end…I dunno, caught, trapped by a lying bitch. I’m dying to read Shadow Prey to find out how that situation resolves!

I did have to laugh about the psychiatrists and their conclusions. It reminded me of gallery docents and museum guides who tell viewers that this is what the artist was thinking. And they’re so clueless. Just like the police in this case as they attempt to profile this serial killer.

I’ve whined about authors who label their dominant alpha characters as psychopaths. They need to read about Maddog here. Now, he’s a psychopath. I think Maddog’s mother did something to him as a kid, and he’s killing women to fulfill a need that grows within him.

Aw, man, I cannot believe Jennifer. The crappy things she does to people. She doesn’t care who she hurts as long as she gets her story.

There’s a liveliness to this. You can’t help but want to keep turning the pages.

The Story
There’s a serial killer loose and the media thinks Davenport walks on water. It’s why Daniels intends for Davenport to work parallel with Homicide on this case: he’s brilliant and quirky, and the police department needs this case solved. Now.

The Characters
Detective Lieutenant Lucas Davenport is gorgeous and willing to bend the rules. He collects guns, makes a nice living off the video games he creates, and likes the ladies and the track. Sister Mary Joseph, a.k.a., Elle Kruger, is a friend from his childhood and a professor of psychology.

She’s also one of his beta testers. He sold his first video game years ago and now plays with Sister Mary Joseph, another sister, a grocer (plays Jeb Stuart), a bookie, a defense attorney, and a few students, including Reynolds (plays Pickett) testing his games. Primarily a replay of the Battle of Gettysburg, the game he’s calling Grove of Trees, a game he doesn’t think he can sell.

Minneapolis Police Department
Bucky and Dick are the internal affairs cops spying on Davenport. Quentin Daniel is the chief of police. Frank Lester is the deputy chief for investigations and a former head of robbery-homicide. Swanson is a homicide cop. Lyle Wullfolk is the head of homicide; Harmon Anderson is his assistant with a high clearance rate. Harry Roe is near retirement. Larry Rice was in maintenance, dying of cancer; his wife is willing to take it to court. Sergeant Sloan helps with the missing gun situation. Davey Johnson and York; Sally Johnson and Sickles; Blancy; and, Cochrane are on surveillance. It’s too bad that Carl Werschel gets worked up so bad when his dogs go crazy.

Carrol MacElreney with Cedar Rapids PD is glad to help out.

The Media
Annie McGowan is with Channel Eight and beautiful with the brains of an oyster. Jennifer Carey is with TV3 and sleeping with Lucas. She has so very few morals, I can’t stand her. Denise Ring is the city editor for the paper at the Pioneer Press.

The maddog, Louis Vullion, was born a serial killer. Never so alive as when he’s killing. The woman he falls in love with, who becomes essential, is his Chosen. Bethany Jankalo is one of the associates at the law firm. Gant is on parole for assault and when he goes after his ex-wife, it’s Vullion gets him off on a technicality. The same kind that keeps protecting criminals everywhere.

Shirley Morris was a housewife. Carla Ruiz is a feisty artist. Jeannie Lewis is a realtor. Jimmie Smithe gets bad advice from an attorney, Del McCarthy, who’s more interested in making a name for himself. Heather Brown, a.k.a., Gloria Ammundsen, is a runaway who’d rather survive as a hooker than live at home. Her pimp was Jefferson Sparks. Shirley Johnson runs a house; Bald Peterson is her security. Cheryl Wheatcroft was disabled and working to get through law school, a senior at the top of her class.

Alan Nester is an antiques dealer, not particularly scrupulous.

The Cover
The cover is basic and split into three sections: bright green on top with the author’s name; a narrow band of black; and, a white bottom with the title and a worn paper scrap with a capital E.

The title is the killer’s focus, Rules of Prey is how he plans and executes, the rules he learnt in law school.

One response to “Book Review: Rules of Prey by John Sandford”