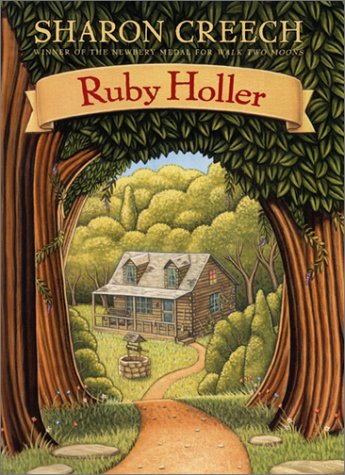 
A too-funny standalone adventure story for middle-grade readers about a troublesome pair of orphaned twins who never had a chance.

In 2005, Ruby Holler won the New Mexico Land of Enchantment Award for Young Adult and was nominated for the Rebecca Caudill Young Reader’s Book Award. In 2003, it won the Carnegie Medal in the U.K. and the U.S. Carnegie Medal in 2002.

It’s laid out like a fairytale and all about love and family. And how elusive the cynical Dallas and Florida find the concept of family.

Creech provides an amazing, absolutely amazing, and horribly funny (in its way) back history on Dallas and Florida’s experiences with previous foster families and makes Tiller and Sairy even more lovable. Tiller and Sairy’s backstory is also well done, and Creech ties it in nicely with today’s events.

All four have discovering to do, and Ruby Holler has a wide range of adventures from working together to accomplish projects to listening to each other, taking each other’s comments and ideas seriously. Valuing each other. And one-upping the bad guys, lol.

Dallas and Florida’s lives have been pretty awful, and it’s easy to see why their defenses rise up so quickly. Why they react so badly to any little thing that goes wrong. On the flip side, Tiller and Sairy have been together for too long, and it’s the interactions amongst the four of them that make them all sit up and take notice of the people in their lives, as they “grow closer and are changed forever”. Even better, this foursome ain’t the only ones who change *grin*.

Along the way, there’s a bit of larceny and greed rearing up with hilarious results. Couldn’t happen to “nicer” people.

“You are now entering Ruby Holler, the one and only Ruby Holler! Your lives are never going to be the same—”

Life has been too much together for Tiller and Sairy, and they’re determined to take their own trips: Tiller to canoe down the river and Sairy to find a particular bird, thank you very much. Only, they do want company, just not each other.

It’s that want that leads them to the Boxton Creek Home and Dallas and Florida, the twins who have dreams of a nice life, one they don’t believe will ever happen.

Their life with Tiller and Sairy could be that dream come true, if only the twins didn’t “know” better.

Dallas and Florida Carter are twins abandoned almost as soon as they were born. Their mother was a woman in a tattered green dress.

Ruby Holler is…
…a lush green valley. In it live a sixty-year-old couple who love to whittle, a man and wife, Tiller and Sairy Morey. Buddy, Lucy, Charlie, and Rose are their children who have all left home. Zhad is their only, lonely, neighbor.

The Boxton Creek Home for Children is…
…an orphanage in the town of Boxton and run by the rule-crazy, delusional George and Marjorie Trepid. Morgan is their assistant, a.k.a., Chief Gopher.

Foster families of the past
The Hoppers weren’t ready for children and I don’t think they ever will be. The Cranbeps with their bitchy daughter Gigi, the Burgertons with their three lying sons who were too free with the sabotage, and the Dreeps who needed workers should never have been allowed.

Z is a hired “gun” who will do anything for money. He checks in regularly at Grace’s Diner.

The cover is too sweet for words as you pass under an arch of trees and head down the dirt path to a cozy log cabin with a covered front porch, sitting in its own holler surrounded by a forest of welcoming trees, a wishing well in the front of the house. A banner stretches across the arch proclaiming the title in a deep red against a deep cream background while the author’s name is at the top in that same deep cream.

The title is home in Ruby Holler where Dallas and Florida learn about true family.

One response to “Book Review: Ruby Holler by Sharon Creech”