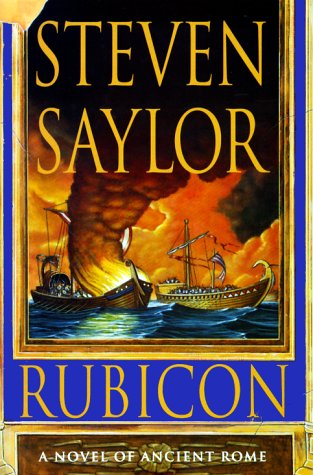 As Caesar marches on Rome and panic erupts in the city, Gordianus the Finder discovers, in his own home, the body of Pompey's favorite cousin. Before fleeing the city, Pompey exacts a terrible bargain from the Finder of secrets-to unearth the killer or sacrifice his own son-in-law to service in Pompey's legions and certain death. Amid the city's sordid underbelly, Gordianus learns that the murdered man was a dangerous spy. Now, as he follows a trail of intrigue, betrayal, and ferocious battles on land and sea, the Finder is caught between the chaos of war, and the terrible truth he must finally reveal.

Also by this author: A Murder on the Appian Way , The Throne of Caesar

Seventh in the Roma Sub Rosa historical mystery series and revolving around Gordianus the Finder, a private detective. The story is set in ancient Rome in January of the Year of Rome 705 (49 B.C. to us).

It’s another pip of a story from Saylor, and yet I’d also call it a bridge novel. For all the action in Rubicon, it’s more of a set-up for the next story arc in this series with Meto’s betrayal and Numerius’ blackmail. That’s my guess anyway, and it’s been driving me mad to read the next story to find out what’s going on. I know it has something to do with Massilia (in Gaul) and Caesar’s troops, if only because the next book in the series is called Last Seen in Massilia.

Pompey has compiled an interesting assessment of Gordianus and his family. One can read his disdain, curiosity, and a bit of envy for Gordianus in the report, as well as his doubts about this “most honest man in Rome”. They are doubts that Gordianus will believe about himself by the end, although I think he’s being too hard on himself.

Hmmm, Gordianus wonders if Publius Clodius’ murder in A Murder on the Appian Way, 5, was the “true beginning of civil war”. Reading these whys that Gordianus raises got me to thinking about our own political system and the wreckage of ordinary people’s lives due to politicians being so insulated from real life. There are some nasty parallels between Rome’s rise and fall and our own rise…and coming fall. Those who do not pay attention to history are doomed to repeat it. I’d hope we were smart enough to pay attention.

Whew, that is some rumor running around about Meto. I’m not quite sure why Romans are so shocked. Aren’t the Romans known for sampling both sexes?

I do enjoy this series. Saylor has created a realistic world of ancient Rome. I can feel so much of what happens, as though I were walking the streets of Rome and the roads of Italy. The character interaction is also a treat. The political machinations, the greed, the everyday conversation, the meals, and more will pull you into this world. In many ways, this would be a fabulous way to teach kids about Rome, by making it real, drawing parallels between home life now and then.

It’s a disaster. Someone has, somehow, assassinated a cousin of Pompey. In Gordianus’ atrium! And Pompey is forcing Gordianus to investigate his death.

Gordianus the Finder is 61 now and retired as a private investigator a year ago. Bethesda is Gordianus’ wife. Diana, their daughter, fell in love with Davus, a former slave and bodyguard to Pompey, and who is now Gordianus’ son-in-law. He’s…not too bright and is tasked with protecting the household. They have a son, Gordianus and Bethesda’s grandson, Aulus.

Mopsus and Androcles are household slaves Gordianus acquired in A Murder on the Appian Way. Cicatrix is the garlic-eating bodyguard Pompey leaves for Gordianus in place of Davus.

The army of Julius Caesar has…
…crossed the Rubicon River with his troops. Marc Antony is one of Caesar’s tribunes. Curio is another tribune and a friend of Antony’s. Some say he is more than a friend. Engineer Marcus Vitruvius is tasked with closing the harbor mouth at Brundisium. Marcus Otacilius is the cohort commander Gordianus and Tiro meet along the mountain path.

Pompey’s army is…
…in Brundisium. Pompey, a.k.a., the Great One (ego much?) is drawing Caesar’s army away from Rome. Lucius Domitius Ahenobarbus, a.k.a., Redbeard, one of Pompey’s generals, was supposed to replace Caesar as governor of Gaul. Now he and Pompey are at odds over where and what to defend. Engineer Magius has boobytrapped Brundisium. Scribonius is one of Pompey’s officers.

Numerius Pompeius, a second generation or so cousin to Pompey, is one of his favorites. Maecia, Numerius’ mother, is the very model of a Roman matron. She’ll tell you so. The unwed Aemilia is the daughter of Titus Aemilius and pregnant with Numerius’ child. Soscarides the Alexandrian is a philosopher who met with Numerius.

Cicero is an old, sometimes friend of Gordianus’ who is self-righteous, smug, and peevish (we first met him in Roman Blood, 1). Terentia is his wife; Tullia is his pregnant daughter married to Dolabella, Caesar’s man, and Marcus is his younger son. Tiro is his faithful slave and secretary, currently sick in Greece. Fortex is one of the guards Cicero left behind.

Lentulus and Marcellus are the new consuls of Rome, both of whom are fleeing Rome. The Salacious Tavern is an out-of-the-way drinking establishment. Ipsithilla is one of its whores and was there six years ago when Gordianus first walked into the tavern.

The cover is a classic Roman wall: a deep, deep lapis lazuli wall framed out in a huge panel of two warships doing battle with one ship burning up in a huge fire and sending a column of dense smoke into the orange sky.

The title finds that Caesar has crossed the Rubicon, the northern boundary of Rome proper. It’s treason for an army to cross it. Today, crossing the Rubicon is an idiom meaning that one has passed a point of no return.