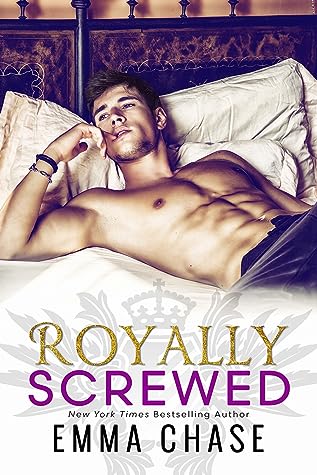 
First in the Royally contemporary romance series about a royal family in Wessco. The couple focus is on Olivia Hammond and Prince Nicholas.

It’s all about the commoner girl who falls in love with the prince, who hates the PR crap he has to do, and whose family wants nothing to do with her. And it begins when Chase sets up her protagonists — Olivia and Nicholas — before she has them meet up. And it was a pip of a meeting, lol, in this character- and action-driven Cinderella tale that Chase sends us spinning through.

Chase uses first person dual protagonist point-of-view from Olivia’s and Nicholas’ perspectives. It gives terrific insight into their thoughts and problems. One of which is what to wear on a date with a prince. Lucky for Olivia, Bibbidy comes through!

That Nicholas is quite the cocky guy. That bit about him being above the archbishop and pope was a crack-up. For all that, he’s quite compassionate, as Livvy learns after their first date, and he hates that there is so much he doesn’t deserve…he also hates his day job. I do believe that day job has influenced those thoughts Nicholas has about, ahem, journalistic integrity. God knows, that’s pretty much gone by the wayside in too many ways.

I adore Franny. She knows what’s what and wants to help Olivia survive “this cesspool the rest of us swim around in every day”. Wait’ll you read the litany of the horrible men and women in the Wessco upper classes! Henry’s issues stem from that good-cheer visit to a military outpost, and what turns out to be a very expensive photo op. And it inspires one helluva speech from Nicholas about making lives count…and not in the usual tenor.

There are a few betrayals in here. Olivia’s dad. Lucy’s stupidity. Nicholas’ too-quick reaction to what he sees as a horrible betrayal, and rather stupid. Why wouldn’t they do their research before berating Olivia?

Not only betrayals lurk within, as there are a variety of conflicts: the bitchy people in Nicholas’ everyday life, the Queen’s nastiness, and Nicholas’ future plans. Those plans…well, I can see how he’d think he could stave it off, but not that he could put it off forever. Which only makes Olivia’s future bleaker.

Still, it’s a chance of a lifetime for Olivia, and it’s a mixed blessing of vicious wanna-be brides and Nicholas.

Remember: perception is reality. And this was quite the fun read!

It’s a fairytale summer for Olivia. A once-in-a-lifetime opportunity to have some fun. She knows this affair will come to an end, but she intends to enjoy herself and Nicholas.

Olivia Hammond is doing her best to keep the family business afloat. The very smart Ellie is Olivia’s sister, a bouncy seventeen-year-old, who helps herself to her sister’s stuff. Bosco is a mix of Chihuahua, pug, and Shih Tzu. Their mother is dead, and their father, Eric Hammond, is a drunk. Grandma Millie preferred the Italian Salute.

Amelia’s is…
…the family business, a coffee shop that specializes in pies, named for Olivia’s mom and being hit with foreclosure. Marty Ginsberg is the waiter/dishwasher/bouncer/repairman. Marty has three baby sisters, triplets: Bibbidy (a receptionist at City Couture), Bobbidy, and Boo. Mm-hmm… His dad is a rabbi from Queens.

Mrs McGillacutty is a ninety-year-old customer who walks over for her exercise. Pete is the “pervy Garbage Man”. Jack had been Olivia’s high school boyfriend. His current fiancée is Jade. Stan Marksum is with Willford Collections. David is the butler at Nicholas’ New York hotel suite. Freddie is one of the boys at The Boys’ Home in the Bronx, one of the charities founded by Nicholas’ parents. In Olivia’s sophomore year in high school, Coach Brewster was embarrassed by her scam to avoid being beat up by Kimberly Willis who found out later about Tara Hoffman. Damian Clutterbuck is the putz Henry met up with.

… a small country with a constitutional monarchy ruled by Queen Lenora, Nicholas’ grandmother. Her husband had been Edward. His Royal Highness Nicholas Arthur Frederick Edward Pembrook, Crowned Prince of Wessco, a.k.a., His Royal Hotness, lives in Guthrie House, the official residence of the heir apparent, his private apartments at the palace. Fergus is his condescending one-eyed butler. Bridget is his personal secretary. Logan St James is the head of his security team which includes Tommy Sullivan (he has a younger sister, Janey; Brandon was a boy she’d been crushing on), and James.

The Prince and Princess of Pembrook, Thomas and Calista, had been Nicholas and Henry’s parents who died thirteen years ago. Prince Henry is the randy royal and Nicholas’ younger brother. Cousin Marcus is in line after Henry, and he’s an imbecile, married to an imbecile, with imbecilic children. Great-aunt Miriam.

Christopher is the Queen’s personal secretary. Alastair is her personal butler. Mrs Everston is an upstairs maid while Mellie is the maid assigned to Olivia’s room. Winston is the head Dark Suit. The bitchy Jane Stiltonhouse is the Palace travel secretary. Sabine is the stylist.

Lady Esmeralda “Ezzy” has been a friend since their school days. Simon Barrister, fourth Earl of Ellington, is one of the few friends whom Nicholas trusts; his family owns Barrister’s, the largest department store chain in the world. Simon married Frances “Franny” Alcott last month, Lady Frances. She doesn’t like Nicholas…and she’s taken up sewing. And ya gotta read why she doesn’t like him! Lucy, Lady Deringer, is quite the snot. Briar House was Nicholas’ and Henry’s school. Hannibal Lancaster has terrific parents. He, however, is a class-A jerk. Sarah and Penelope are sisters and both are the Ladies Von Titebottum.

The Pembrooks are descended from a northern British general, John William Pembrook, who married the daughter of Robert the Bruce and then left to form their own nation, Wessco. King Clifford II sounds like he didn’t have all his marbles.

Brent and Kennedy Mason (pregnant with twins) of the Mason Foundation are the hosts for the party. Their foundation supports programs that actually help real people. Vivian Mason is their daughter.

The cover is yummy with a shirtless Nicholas lying on his 18th birthday bed, a nice-looking six-pack pulling my eye down to those low-fitting pants. He’s obviously thinking, his right arm bent, a finger on his lip, as Nicholas looks off to the upper left. The title is a mix of hammered gold serif and purple sans-serif with a tiny info blurb below it and the author’s name in a sans serif black below that. A faint gray coat of arms backs all the text. It’s a lovely mix of colors from the bed’s purplish black with the deep gold painted border against the gold wall, a gold that reflects Nicholas’ skin in a smooth contrast with those creamy sheets. Yum.

The title is Nicholas’ apology, for he Royally Screwed up.