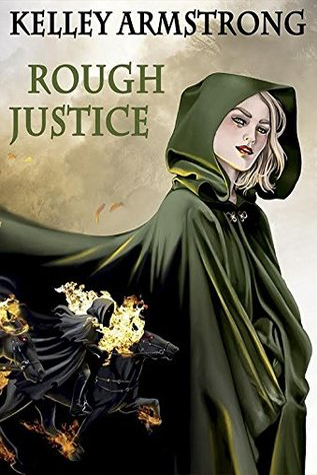 A short story, 5.5 in the Cainsville urban fantasy series based in and around Chicago and revolving around Olivia and her first Wild Hunt.

How lovely to have another Cainsville novel to read! Especially one that shows us what Olivia, Gabriel, and Rick are doing now, six months after Olivia and Gabriel moved in together.

“‘Our cloaking devices,’ Ricky said, shaking his out. ‘Appropriately in the form of an actual cloak.'”

It’s a mix of first person protagonist point-of-view from Olivia’s perspective and a third person simple subjective point-of-view from Gabriel’s. The combination worked, although Olivia’s thoughts become so annoying, as she wrestles with if the target is actually guilty. She “knows” the Cŵn Annwn are infallible, but she doesn’t know, and it sticks in her craw. And her whining on and on and on sticks in mine!

Gabriel has evolved from the person he first was in Omens, 1, and has become more concerned about others…okay, about Olivia, if she will stay with him, if he has a chance. He’s also learning to be more discerning about his cases, that he has enough money to pick and choose. That boy does have his hoarding issues. And quite rightly.

The primary conflict is Olivia’s lack of faith in the Wild Hunt’s choice of target, and it’ll take Olivia pursuing the truth in her own way before she can accept the faith the Cŵn Annwn have in their judgments. Gabriel’s issues with his mother and his keeping those secrets is a secondary problem, which points up communication as an underlying theme, as Gabriel, Olivia, and Rose each harbor their own secrets, holding them back to protect the others. Another is Gabriel’s worries about their life together with too much that is his view, her house, and Gabriel wants, no, he needs reassurances.

Huh. There’s an interesting point Olivia makes about her adoptive mother, and it is not a good one. As for Gabriel’s mother … I don’t want her memories suppressed. I want her to experience them and realize how awful she’d been.

Then that ending. The one half was a shocker that made an awful sense while the other was so sweet and a practical answer to Gabriel’s fears.

Having accepted her role as Matilda, Olivia has turned tradition on its head, refusing to make the same mistake as that original Matilda. The only problem is that it does leave both sides of the fae weaker.

Liv is determined she can compensate, and this Hunt, her first, seems easy enough. She knows that the Cŵn Annwn know when someone is deserving of their rough justice

But Olivia is not one who trusts so easily, and her doubt prevents the hounds from meting out that justice.

Olivia Taylor-Jones, adopted daughter of a department store mogul and the birth daughter of serial killers, is now living with Gabriel Walsh, a highly successful defense lawyer and the Gwynn to Liv’s Matilda of the Hunt.

Olivia works as his investigator. Lydia is Gabriel’s very efficient secretary. Bryant is Lydia’s grandson, a student at Caltech.

The Cŵn Annwn are…
…the Welsh Wild hunt, tasked with delivering justice on humans who murder any with fae blood. A cŵn is a hound. Ioan (John) is the leader of the local Hunt and heads up Gwylio Consulting, a security firm. Brenin is his alpha hound. The Huntsmen all work for Gwylio and include Aeron (Aaron). Rhyddhad is the fae horse Olivia rides.

Ricky Gallagher is the gorgeous heir of local Satan’s Saints gang leader and grandson of Ioan, with an MBA in finance, who rides Tywysog Du in the Hunt. His other side is Arawn, Lord of the Otherworld and king of the Cŵn Annwn. Today, he’d been Liv’s lover and now her best friend. Lloergan “Lloe” is a fae hound who had been badly treated and whom Ricky saved (Betrayals, 4).

Cainsville is…
…a sleepy little town outside Chicago populated and run by the Tylwyth Teg. The Carew House is now Liv’s house. Ida was a fae elder and the leader of Cainsville who had sacrificed herself. Patrick is a romance writer, a bòcan, and Gabriel’s father. Grace is a bogart and rents out apartments, but it’s really a fae nursing home, one where Seanna Walsh, Gabriel’s waste of a mother who arranged her own death fifteen years ago, is being cared for. Great-aunt Rose Walsh has the Sight and desperately wants Gabriel to find closure with his mother. Larry runs the diner.

Keith Johnson, an Audi car salesman, is the target of the hunt. Kathy had been his wife. Alan Nansen opened a successful restaurant, Eclipse, that is not doing well. Heather Nansen is his wealthy wife who put most of her trust into his enterprise.

In the distant past…
…Mallt-y-Nos, Matilda of the Hunt, Matilda of the Night, was a half-Tylwyth Teg, half-Cŵn Annwn woman in the very distant past who made some bad choices, and the fae on both sides have paid the price. Arawn and Gwynn were the princes, one from each side, with whom Matilda had been friends for years before she fell in love with Gwynn ap Nudd, king of the fae. In another incarnation, Calum was a boy from a village and Matilda’s dearest friend. Hamish was that Matilda’s cousin.

The cover has a cartoon quality to it. In fact I thought this would be a graphic novel, instead it’s Olivia in a deep mossy green cloak, presenting a three-quarter profile, her pale face tilted and looking out from the hood, her blonde hair swinging away, in her persona as Mallt-y-Nos, the power of the Wild Hunt. The background appears to be old parchment but is a very blurred landscape of trees and riders on horses. In the forefront on the left is one of the Hunters astride his galloping horse with hooves, mane, and eyes a’flame, leading a thundering herd of similar figures. The author’s name is at the top in a serif black with the title in the same cloak green behind Olivia’s head.

The title is what the Wild Hunt metes out, Rough Justice.