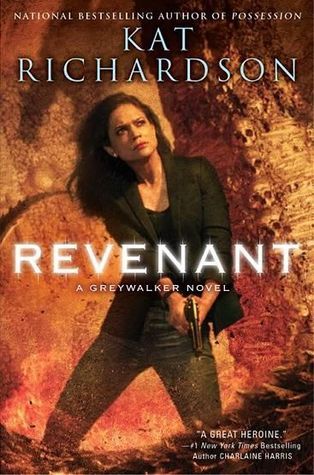 Goodreads
Also in this series: Possession

Turmoil, sickness, and destruction are sweeping through Europe—and its effects are being felt all the way across the world in Seattle. Harper Blaine and her lover, Quinton, suspect that Quinton’s father, James Purlis—and his terrifying Ghost Division—are involved.

Following a dark trail of grotesque crimes and black magic across the Old World, the pair slowly draws closer to their quarry. But finding and dismantling the Ghost Division won’t be enough to stop the horror that Purlis has unwittingly set in motion.

An ancient and forgotten cult has allied with Quinton’s mad father. And their goals are far more nightmarish than Harper and Quinton—or even Purlis—could ever imagine.

The pursuit leads to Portugal, where the desecrated tomb of a sleeping king and a temple built of bones recall Harper’s very first paranormal case and hold clues to the cult’s true intentions. Harper and Quinton will need all the help they can get to avert a necromantic cataclysm that could lay waste to Europe and drag the rest of the world to the brink of war.

Also by this author: Possession, Indigo

Ninth and possibly last in the Greywalker urban fantasy series revolving around Harper Blaine, a most unusual private investigator based in Seattle. This story takes place mostly in Portugal.

I have loved this series. Richardson put such an interesting twist on private investigators. Yes, there are vampires and more in this, but it’s Harper who’s the fascinating supernatural in this one. I adore the mysterious Quinton as well. He’s been, well, a mystery from the start, and Richardson has been dribbling out bits and pieces about his past throughout the series.

I’m bummed that Richardson is probably ending this series. It does feel as though Richardson has left herself room to come back to Harper, the Greywalker, but I suspect she was merely being gentle.

Richardson gives us a grim, selfish back history on Carlos. Fascinating and gruesome, and I did appreciate how she made him both evil and sympathetic at the same time. It’s horrifying that as bad as Carlos sounds, he appears angelic next to James Purlis. The sacrifices Purlis is willing to make, listening to Purlis and Rui discuss their ideas, their plans, will disgust you.

Carlos’ house is definitely weird, existing in different times. I suppose, though, that it rather suits the travel arrangements he’s made for Harper, ’cause how Harper gets to Lisbon is pretty weird too. And the good times continue when Lisbon itself proves a difficult city for Harper to move in, for she sees all its history in the gray, “images … like overlapping film”.

I wish Richardson had been more clear about the temporaclines within Carlos’ house. It was very confusing to read, although I suppose it could have been done on purpose to help us identify with Harper and her confusion. There were also, hmmm, how do I describe this? Jerks. As I read, it felt like jerks in the story that pulled me up in my thinking. Disjointed bits of scenes that felt like the scenes were broken. Not smooth. Then there are scenes like the one at the old convent when Carlos is tricked. While the history he relates is fascinating, the actual details of this contemporary meeting are extremely confusing. Who he’s meeting, how he arranged it, how Maggie learns enough to know who to ask about it.

Quinton raises an excellent point about the Portuguese as he wonders how they went from a great sea-faring power to a backwater. But then that does seem to be the cycle that countries endure. Look at the Romans, England, and it looks like we’re heading that way as well. I do love the bit of background Richardson provides about King Sebastian, Dom Sebastião. Wow, he was a busy boy and quite modern in his outlook.

Ooh, I love this thought Harper has about her friend Phoebe’s used bookstore, Old Possum’s, as she wonders if “books somehow collected the intellectual joy of their readers and let it back out…” And I think Richardson is a Dr. Who fan.

If Harper can travel somewhat in the Grey, why doesn’t she use it to escape Lisbon? I suppose though that it wouldn’t have worked. Actually, as I think about it and read on, Richardson is brilliant with this scenario. It creates drama and tension and makes me even more terrified of Rui and reminds me why I should fear the Grey. I do appreciate that Richardson gives us dribbles of hope along the way. Then again, Harper has that ability to enter the gray, why didn’t she do it when she was captured again?

Another quibble is how Carlos, as a bastard, can be the last Count of Atouguia.

I have missed the Danzigers. I’m glad Richardson brought them in. Hmmm, I wonder if Richardson will carry on with Soraia in a new series.

It’s been a slew of disasters across Europe as Quinton follows in his father’s wake, and now Harper must get to Portugal without anyone knowing she’s gone.

Quinton’s father has done the unthinkable and taken his own granddaughter to use in conjunction with his ghost boxes, to fulfill his promises, and execute his plans to take down the world.

Harper Blaine, a.k.a., Helena Robinson-Smith, is a private investigator who has died a number of times, always coming back, for she is the Greywalker. Quinton, a.k.a., Jay or James Jason “J.J.” Purlis or Reggie McCrea Lassiter or Christopher Marlowe Smith or Tio Pássaro, is a magician when it comes to electronics. He’s been chasing down his megalomaniac father.

Dr. Samantha Rebelo is his very skeptical sister, married to Piet Rebelo, and living in Portugal. Soraia is Sam’s six-year-old daughter with imaginary friends. Martim is the two-year-old. A vineyard manager’s ghost paces in Sam’s house and wants Harper to get the little girl back for she makes the house happy. Quinton’s mother, Liz, is locked up as nuts.

Carlos is a vampire necromancer who originally came from Portugal (he “died” in 1755), and he has a personal interest in preventing Purlis from following through on his experiment. Cameron is the leader of the Seattle vampires. Tovah works at a funeral home.

Dom Carlos is our Carlos, the Angel of Death. His mother had the ability to graft bone from herself onto another to help their broken or diseased bones heal. Rafa is a housekeeper who died in 2000 and welcomes Harper into Dom Carlos’ home. Lenoir had been Carlos’ master in the 1700s.

A Casa Riberia is…
…a turihabs, a bed-and-breakfast, on land given to Amélia by her parents as part of her dowry. Nelia is a descendant and runs the B&B when the olive harvest is on. Eladio is her possessive boyfriend.

Mara Danziger is a witch, and she’s married to Ben. Both are university professors (she teaches geology and he teaches folklore), and they’ve been on the move in Europe for the past four years. Brian is their son. Quinton thinks they may be able to help keep Soraia safe if they can rescue her.

James McHenry Purlis, Quinton’s father, is a really bad guy seeking power for his own sake (see Possession, 8). He was running a Ghost Division that explored how paranormal creatures worked and if their abilities could help Purlis in his plans for world domination. He’s working with the Bone Mages.

Kostní Mágové are…
…the Bone Mages, mostly priests, nuns, and monks who are religious fanatics. Part of their process is to tune and assemble bones, using them for spells, and binding them. Maggie Griffin is the current apprentice of Master Rui Araújo e Botelho de Carreira who had been an apprentice under Lenoir and then Carlos. The security at the site includes Bara, MacPherson, and Mancino.

The Night Dragon is a construct intended to destroy. O Dragão do Inferno is the Hell Dragon, Coca, a dragon in Portuguese mythology, a boogeyman.. Both dragons, both draches, need bones and a dreamspinner.

The Marquis of Pombal was prime minister back in the day. Before he betrayed most of the noble Portuguese families, he was Carvalho e Melo — the same cousin who threw Carlos from the window.

“The Grey is where ghosts dwell and monsters are real.” Nevoacria are shadow creatures used by Carlos. The Guardian Beast dwells in the Grey; Harper thinks of him as her boss. An ossuary is constructed of piles of bones arranged to decorate the walls. Sergeyev was the man imprisoned by Lenoir back in the day (see Possession). The ghost bone results when bones match resonance and those bones can be exchanged or grafted. Ick.

The cover has a stone background bathed in an orange light with part of the wall built from bones. In front of it is Harper, gun in hand, wearing jeans and a black blazer with a determined look on her face and in her stance.

I suspect the title refers to Rui, as he is a Revenant.