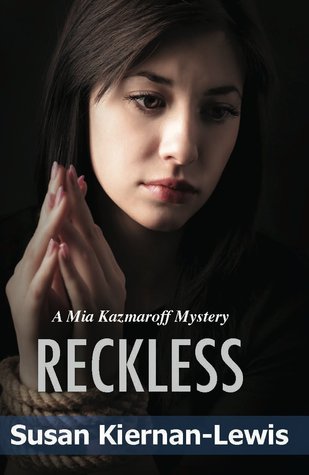 
First in the Mia Kazmaroff crime thriller series and revolving around a woman with a psychometric gift in Atlanta, Georgia.

It’s an interesting start to this character-driven tale. A cop partnership in which one hates the other. A cop’s wife who loves to stir up trouble. Another wife who screwed up big time. A sister too headstrong to think.

It’s a contentious partnership with Dave wanting to be all “hey, bro” while Jack simply despises him. An intense dislike that Jack finally realizes the truth of as he works to understand why he feels as he does. And it’s darn confusing about Jack’s happiness-guilt, which is the underlying story conflict. Hmmm, maybe that means it’s supposed to be confusing..?

It’s helped by that third person dual protagonist point-of-view coming from Jack’s and Mia’s perspectives, as we read what each of them thinks and feels. As for Dave…whoa…learning about the real Dave was so unexpected. I liked Dave until I didn’t…and I came back to thinking I might like him. Maybe…

Mia is blunt and forceful. It took me by surprise when she insisted on Jack opening a private investigations agency with her. It definitely took Jack by surprise, lol. And it is convenient that Mia has inherited her brother’s place. And interesting that he can afford something that nice…ahem.

Which leads into that romantic interest. Yeah, it was too quick for me. It’s not that I object to it. It’s simply that Kiernan-Lewis didn’t work up to it. Not in my opinion.

I must say that gift of Mia’s is rather handy for knowing the truth about people, but Mia irritates the hell out of me. She’s all self-righteous and only her ideas have any merit. And, and, and she doesn’t want someone around who doesn’t respect her…boo-hoo. Jack does have to take some blame as well for not at least listening to her. But how Mia thinks someone will immediately take her seriously…especially when she’s jumping all over the place!

As for why Dave’s fellow detectives simply wrote him off…I don’t feel as if Kiernan-Lewis ever did answer that question.

It’s too much, Mia’s gift and riding. It’s become lethal and is why Mia took that bad tumble at the gymkhana. Then her brother’s death shocks her and their mother.

Dave didn’t just die in bed, and it isn’t right that his fellow detectives, his deputy chief, are just walking away from his death. Mia knows it’s murder. Why are they not pursuing it?

Mia Kazmaroff has a gift for psychometry, a branch of retrocognition, and has lost her job teaching at Georgia State. Shiloh is her thorough-bred cross. Detective Dave Kazmaroff is her brother and Jack’s partner. Heather is/was Dave’s girlfriend and supposedly about to get engaged. Jess is their mother with the same gift. Their father, Gaspar, was killed by a drunk driver.

Major Crimes Detective Jack Burton is splitting up with his wife, Diane. Tommy had been their lawn boy. He rescues a Maltese mix and calls her Daisy.

Deputy Chief Bill Maxwell is married to Carol, his second wife. And she’s “too good for the redneck, uneducated other halves of Atlanta’s finest”. Cindy had been his first wife. Mindy is Maxwell’s daughter, married to Tad. I think Ellie is Maxwell’s secretary.

Karen Sanders is the medical examiner who owns an elderly black Lab, Cocoa; Bennett is her new assistant. Peterson is a med tech. Kiernan-Lewis mentions an Ange, and I think it might refer to Karen??

The wives include the too-good-for-them Trish Barnes who’d gone to college with Karen (Sheila Graber is Trish’s mum), Carol Kirkland, and Edie Johnson who fancies herself as the intelligentsia of the group.

Ketchum, Davey, Marley, Fatso, Grub, and Beaner, the young lieutenant from Boston were Jack’s brothers in Iraq. Jethro had been a homeless man.

The cover is Mia’s head with her straight dark hair, a three-quarter profile with her head and eyes glancing down to our right. Her hands are clasped together in prayer, primarily due to the thick rope tying her wrists together. The series information is in white by Mia’s knuckles with the title in a pale gray immediately below it. The author’s name is in white against a transparent charcoal band at the bottom.

The title is all about Mia and how Reckless she is.