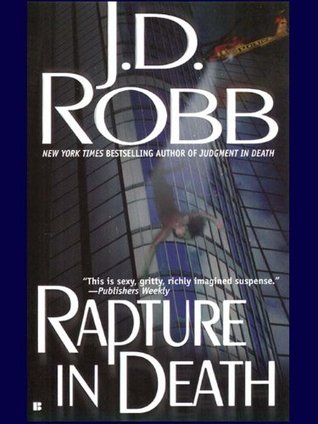 Fourth in the In Death futuristic romantic suspense series revolving around a detective Lieutenant Eve Dallas and her gorgeous husband, Roarke, in the New York City of September 2058.

These two do have a complicated relationship, all based in love, and definitely equals in taking the initiative, lol. Roarke particularly loves “forcing” Eve to board a space-going ship, and you’ll be LYAO when he does.

Whew, that machine Jess created certainly does a job on Dallas and Roarke’s romantic life. It’s a good thing there’s a wall around his place in New York.

While I adore the gadgets in this futuristic New York City. Wait’ll you get a load of Cerise’s VR goggles. Phew . . . *shakes fingers* Then Dallas needs to confess to Roarke, LOL. Then again I would hate to miss out on the taste of real food.

The lateral-thinking Dallas does crack me up. She steamrolls over everyone, yet has the loyalty of her people and friends. An interesting conflict for her is Roarke’s criminal past and her battle with following the rules . . . and breaking them to bring about justice. Robb does give Dallas weaknesses, and it humanizes this woman who will take on chemi-heads and armed bad guys with glee.

Roarke is an amazing man, and it cracks me up (I know, I crack up a lot in this series) at the reactions he gets from women and how Eve deals with it. Poor Peabody, the drooling that girl does . . .

Reeanna believes that our fate and personality are coded in at birth. That nothing we do or choose will change. Dr Mira doesn’t believe in this theory, but that the individual can choose their own fate through environment, free will, and the basic human drive to better oneself. An interesting contrast.

It’s an easy read full of drama and tension, yes, and fear too. The evil in this is scary and so difficult to prove.

Robb uses third person global subjective point-of-view from a number of perspectives, chief among them are Dallas’s and Roarke’s. It’s a POV that allows us to access any number of the minds of other characters. Which only adds to the fright. Okay, and the fun.

It’s the last night of their honeymoon, and their last week on the Olympus Resort. Until suicide hangs up Dallas and Roarke’s evening.

Yet more suicides plague the Lieutenant. Suicides that make no sense.

It’s that party to launch Mavis that provides Dallas with ideas, leading to a macabre plot to destroy Roarke.

The prickly Lieutenant Eve Dallas is the head of Homicide at Cop Central. The protective Roarke is her gorgeous, sexy billionaire husband. Summerset is Roarke’s majordomo in charge of his house. Galahad is the cat Dallas inherited back in Naked in Death, 1.

NYPSD
Officer Delia Peabody, a Free-Ager, is Dallas’ aide. Captain Ryan Feeney is the head of the Electronics Detective Division (EDD) and had been Dallas’ mentor and now friend. Commander Jack Whitney is Dallas’ superior. Dr Charlotte Mira is the department’s top profiler who loves Eve like a mother. Dr Lee Morris is the medical examiner, the snazzy doctor for the dead. The annoying Dickie Berenski is the chief lab tech. Sheila, another tech, is good with computers. The Tower is a reference to Chief Tibble‘s office.

Nadine Furst is the ace on-air reporter for Channel 75 and a friend of Dallas’.

Jess Barrow is a musicologist. Big Mary is . . . big and a bit slow.

Fitzhugh is a brilliant defense lawyer and a partner in Fitzhugh, Bastwick, and Stern. His life partner, Arthur Foxx, is a nutrition consultant with Nutrition for Life. Millicent Barrows is an ex-wife of Fitzhugh’s. Leonore Bastwick is a shark with no conscience. Ridgeway is with the law firm and is Foxx’s representative.

Cerise Devane is the CEO of The Tattler, a tabloid. Frank Rabbit is her terrified and devoted assistant. Senator Pearly is/was a dead-center Liberal. Chief Dudley is in charge of security at the Government Security Center in East Washington. Sergeant Hobbs is one of Dudley’s people.

Olympus Resort is . . .
. . . a huge project in which Roarke is involved. Jack Carter is an assistant engineer on Olympus. Drew Mathias, an autotronics engineer, is Jack’s roommate. Dr Wang is an old and retired medical, keeping his hand in as the doctor on board the Olympus.

Roarke Industries
Dr Reanna Ott, a physiologist, and her husband, William Shaffer, who designed the games, are off to Olympus in a few weeks. The Lisa droid is a superior model. Karen is a flight attendant.

The D and D is the Down and Dirty, a dive bar Dallas likes. It’s run by Crack, a colorful man. Armand, a droid, is the maître d’ at the Village Bistro. The Bowers Institute has strong evidence of genetic brain patterns and their influence on behavior. Lieutenant Jake T Casto of Illegals had seduced Peabody in Immortal in Death, 3. Roger Keene is the top guy at Be There Records. Lilah Monroe has an audience participation show on Broadway.

It’s a dark cover with a glass skyscraper filling the background as a blur of a woman falls while a red helicopter spotlights the victim. The text is all in white with the author’s name at the very top and an info blurb below it. Below the falling woman is a testimonial with the title immediately below it.

The title is the intention, that the victims find Rapture in Death.