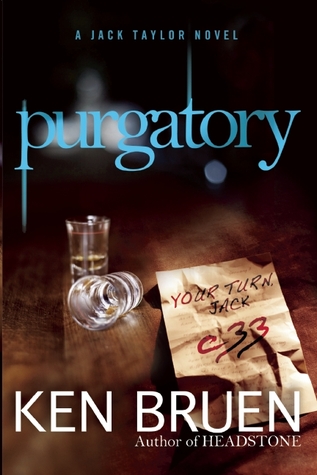 Recovering from the severe mental and physical wounds inflicted from his recent past, Jack Taylor has finally found a modicum of peace. He has managed to kick the myriad substances that have had a stranglehold over his painful life. Yet this fragile existence is threatened when a vigilante killer begins targeting the scum of Galway, signing mysterious notes with the moniker 'C 33'. The killer addresses these cryptic letters to Jack, trying to goad the former cop into joining the murderous spree and to help cleanse Galway.

While Jack must unravel who this demented killer is, he is also brought into the fold of an enigmatic tech billionaire who has been buying up massive amounts of property in Galway, seemingly in the hopes of offering this downtrodden city a better future. Yet if Jack has learned one thing living in Ireland, it's that people who outwardly claim to be on the side of righteousness are likely harboring far more nefarious motives beneath the surface.

With the help of his friends, former dealer-turned-zen master Stewart and dogged police sergeant Ridge, Jack is determined to track down C 33, even if it jeopardizing his livelihood, his friends, and even the remaining shreds of his own sanity. C 33 is Bruen at his best: lyrical, brutal, and ceaselessly suspenseful.

Also by this author: The Ghosts of Galway

Tenth in the Jack Taylor mystery series about an ex-Garda private investigator who lives in Galway, Ireland.

My Take
This is a stroll down memory lane, looking back over past cases and events, and per usual, Bruen includes an increasing selection of book titles…and I’m adding to my TBR as well as my TBV—to be viewed.

I felt a detachment in reading this, as if everyone were simply going through the motions. A few loose threads in this including what Reardon is up to in this. What happened with Westbury’s daughter? ‘Cause I can’t see him allowing anyone to get away with hurting her! Once you learn who C33 is, you’ll wonder at the choices this vigilante has made. What’s the rhyme or reason to making these choices…no…Bruen did provide the clue to this one as I think on it. But I still have to wonder because such a person doesn’t normally make choices for other people’s good.

This was definitely an odd one. More disconnected than the earlier nine Jack Taylors and possibly a reflection on Jack’s sudden sobriety. Yeah, can you believe it? No drugs, no booze, no smokes. Strangely enough, for all its disjointed words, it was a relatively easy follow. One I wish I had avoided. I just can’t bear it, especially with that bloody ending Bruen has left us hanging with. What the hell!!?! All I can say is…Bruen better get on with book 11 and either finish me off or allow me to sigh with relief, for there’s just too much loss. A loss that I suspect will suddenly hit me in the middle of the night and leave me weeping.

Part of me wonders if Stewart undertook this task because he’s missing Jack’s usual modus operandi. NOT that I’m saying any of this is Jack’s fault.

We get more about the type of woman his mother was…definitely, we need parents to be licensed.

Oh god, this was awful. Absolutely awful. I wish I hadn’t read it, and I do have to wonder if this is the end of the Jack Taylor series, if only because I can’t imagine how it can continue as the story steps from Purgatory into a potential Hell.

The Story
It’s a sober Jack who’s mystifying Galway and his few friends with his new habits. No one can believe this tearaway can possibly behave this well, especially C33 who leaves him notes taunting him with the possibilities, egged on by the past cases he’s solved which have righted many wrongs.

The Characters
Jack Taylor has been ex-Garda for years and an addict using alcohol, drugs, and cigarettes for much longer. Except now. He’s worked a long time as a private investigator and has a long string of successes. More than he has friends that’s for certain.

A former dope dealer and now a yuppie Zen-entrepreneur, Stewart has been Jack’s friend for quite a while. Ridge is a sergeant in the Garda and another friend of Jack’s. She’s no longer married to, as Jack calls him, that bollix.

C33 is a vigilante taking out the bad guys and addressing notes of invitation to Jack.

Daniel Reardon is a dot-com billionaire who has arrived in Galway to set up his business and buy up the town. I must say, I don’t like him. Kelly is Reardon’s PR director. And wife. Skylar and Stan are a couple of Americans working for Reardon. Moore is a short-term babysitter.

Gerald “Roy” Westbury is the lawyer to the criminal element.

Tim Rourke is a raping thug; Sister Maeve’s loss of Our Lady of Galway gets Jack and Ridge in trouble and sets Stewart up for an attack of nerves; Peg Ramsay is a nasty moneylender; FX are her two bodyguards; Brennan Jr doesn’t have the smarts to follow in his daddy’s footsteps — thank god; Len Waters is another psychopath; and, Dr. James seems to be in charge of the nuthouse.

Lee, Clancy, and Sharkey are the negative side of the Garda with a brief appearance while Tremlin is slightly better. He has a daughter, Oonagh, who needs a job.

The Cover
The cover has a cozy, pub sort of feel with its wooden table and a hint of light at the back, a couple of shot glasses rolling on its surface and one of the notes addressed to Jack.

The title is where Jack lives, in Purgatory. 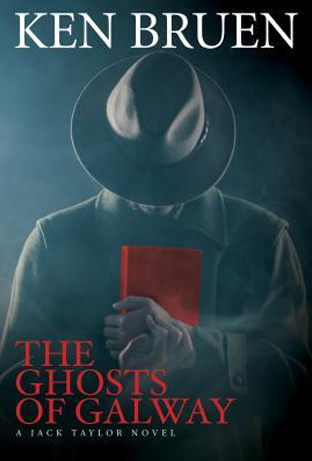 Book Review: The Ghosts of Galway by Ken Bruen

One response to “Book Review: Purgatory by Ken Bruen”