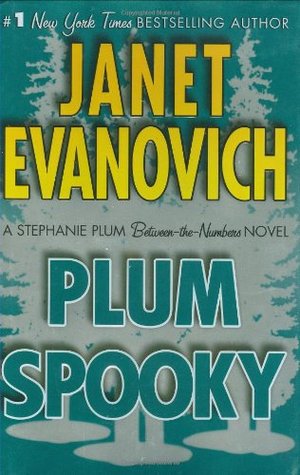 According to legend, the Jersey Devil prowls the Pine Barrens and soars above the treetops in the dark of night. As eerie as this might seem, there are things in the Barrens that are even more frightening and dangerous. And there are monkeys. Lots of monkeys.

Wulf Grimoire is one of the Unmentionables who roams the world, exploring opportunities, killing without remorse, and disappearing like smoke. He’s chosen Martin Munch, boy genius, as his new business partner, and he’s chosen the Barrens as his new playground.

Munch received his doctorate degree in quantum physics when he was twenty-two. He’s now twenty-four, and while his brain is large, his body hasn’t made it out of the boys’ department at Macy’s. Anyone who says good things come in small packages hasn’t met Munch. Wulf Grimoire is looking for world domination. Martin Munch would be happy if he could just get a woman naked and tied to a tree.

Bounty hunter Stephanie Plum has Munch on her most-wanted list for failure to appear in court. Plum is the all-American girl stuck in an uncomfortable job, succeeding on luck and tenacity. Usually she gets her man. This time she gets a monkey. She also gets a big guy named Diesel.

Diesel pops in and out of Plum’s life like birthday cake – delicious to look at and taste, not especially healthy as a steady diet, gone by the end of the week if not sooner. He’s an über bounty hunter with special skills when it comes to tracking men and pleasing women. He’s after Grimoire, and now he’s also after Munch. And if truth were told, he wouldn’t mind setting Stephanie Plum in his crosshairs.

Diesel and Plum hunt down Munch and Grimoire, following them into the Barrens, surviving cranberry bogs, the Jersey Devil, a hair-raising experience, sand in their underwear, and, of course . . . monkeys.

A Between-the-Numbers novel, 14.5, in the funny Stephanie Plum romantic suspense series and revolving around a girl bounty hunter in Trenton, New Jersey, and Diesel, a dimpled hunk with unusual powers. If you’re interested, there is a chronological listing of the Stephanie Plum books on my website.

I adore Diesel. He’s such a tease, a hunk, and very flirtatious. He even likes Stephanie’s family. On the negative side, he’s patronizing enough I’d consider hitting him and expects Stephanie to wait on him and make grilled cheese sandwiches. He does accept no pretty well, though, lol.

I do love Stephanie Plum, and this story drove me nuts…I wanted to know more about the Tank-Lula conflict!

Evanovich does have lots of fun with Plum Spooky, and we get to meet the Easter Bunny, fire-fartin’ Elmer, and Sasquatch. Oh, I can’t forget Carl! You’ll adore Carl, lol.

And it’s a Stephanie Plum, so there are lots of laughs, crazy action, and crazier friends, including Carl! Naturally, there is lots of junk food throughout so be sure to stock up on doughnuts, fried chicken, hamburgers, fries, milkshakes, and pizza!

Stephanie mentions a cousin Jessica who lives in Marblehead near Salem, and I’m wondering if she will play into Evanovich’s Lizzy & Diesel series.

Wulf is back, and Diesel has to stop him. Right after he finds out what Wulf is up to. For now, Stephanie has to deal with him, Carl the game-playin’ monkey, avoid Wulf and his shocker of a hand, escape being Munch’s sex slave, and figure out how to round up her FTAs.

Then there’s that babysitting job she takes on for Joe, lol.

Stephanie Plum prefers being an inept bounty hunter to putting on stockings and working in an office — or a factory. And I can’t blame her! Lula is her very plus-sized “partner” with an even bigger sense of her own abilities. And an allergy! Connie is the office manager for Vincent Plum Bail Bonds. Vinnie Plum “owns” the company and is Stephanie’s snake of a cousin. Grandma Mazur lives with Stephanie’s parents.

The scruffy Diesel is one of the Unmentionables and tasked with the job of policing rogue Unmentionables. Like the urbane Gerwulf “Wulf” Grimoire, his cousin whose signature kill is the handprint he leaves behind on his victims. Both boys are Swiss and Ranger knows both of them.

Joe Morelli is a Trenton cop and Stephanie’s on-again, off-again sex-on-legs boyfriend. Anthony Morelli is the brother he’s stuck babysitting. Angie Morelli is the wife who threw him out. Charlene is but one of the babes Anthony brings to Joe’s.

Ranger is the true man of mystery and a primo bounty hunter who runs his own security operation. He likes keeping tabs on Stephanie, if only for the entertainment value, lol. Tank is his second-in-command and has been dating Lula. Then he adopts three kittens: Miss Kitty, Suzy, and the pregnant Applepuff. Hank is another of his men, and he’ll be stuck in the monkey house.

Carl is a monkey who gets left with Stephanie while his owner, Susan Stitch, goes off on her honeymoon. He’s more intelligent than a lot of people and adores his Super Mario game. Mr. Fratelli is Joe’s irate neighbor. Miss Gloria is the psychic who advises Lula.

Martin Munch is a super and very erratic, eccentric genius, Gordon Bollo, and Denny Guzzi who shot himself in the foot are all FTAs. Eugene Scanlon is Munch’s supervisor. His sisters are Roberta Scanlon, a web designer, and Gail Scanlon, who is into animal rescue. Solomon Cuddles and Doc Weiner both deal in the product for which Munch is looking.

Unmentionables are humans with unusual powers. Some of those living in the Pine Barrens include the Jersey Devil; a Sasquatch; Bernie, the retired Easter Bunny; and, a fire-fartin’ Elmer.

The cover is a soft evergreen with a silver foil silhouette of trees. The author’s name is in bright yellow and the title is the same green as the background and outlined in silver.

The title is what Wulf is, Plum Spooky.