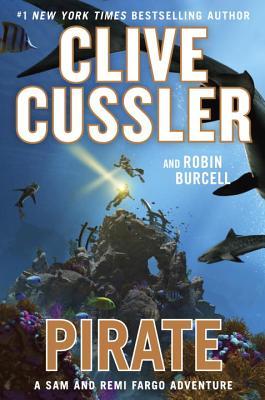 Eighth in The Fargo Adventures action adventure series and revolving around Sam and Remi Fargo, treasure-hunting millionaires. The prologue opens in the fall of 1216 in Norfolk, England.

Must be nice to have your own jet and flit off wherever you like. Lucky, as the Fargos are constantly on the run in this one.

I feel rather nasty about this, since I’ve been complaining about the last few Fargo Adventures (I seem to have missed reading The Solomon Curse) for being rather dull with too many info dumps. Pirate was much better, although still rather bland and shallow. It’s just too easy for the Fargos, although I do enjoy getting the drop, eventually, on the bad guys. And I do so very much appreciate how considerate the Fargos are towards the people they encounter.

I can sympathize with Alexandra. To a point. It’s when she throws in with the bad guys that I want to smack her silly. As for that Avery. Too typical of the bad guys who think it’s not fair when someone steals something they stole in the first place. What’s funny about the guy is how clueless he is for all his smarts.

It’s rather confusing with all the past history that is sprinkled throughout, as I tried to figure out who was related to whom and where that cipher wheel came from. Went to. Were William the Marshal and Robert de Braose related? I ask because Maude de Braose is said to be William’s daughter.

There’s a bit in here about Robin Hood…and I hate to admit that I suspect it’s much more accurate than the movies. Ah…the romance has died…*giggle*

The tag line for Pirate made me laugh…Sam kept promising Remi her vacation would start tomorrow, right after each. Little. “Adventure”.

An 800-year-old treasure…an ancient cipher wheel…a brutal murder…and a man who will stop at nothing to claim what he considers rightfully his.

Husband-and-wife treasure-hunting team Sam and Remi Fargo have gone on impossible missions before and faced many perils, but never have they faced an adversary as determined as the one before them now.

The battle will take them halfway around the world, and at its end will be either one of the most glorious finds in history — or certain death.

Sam Fargo is an engineer who used to work at DARPA and who inherited his father’s love of rare books. His wife, Remi, is a crackshot who loves adventure as much as Sam. Both are treasure hunters, a.k.a., Sir John and Lady Kimball, a.k.a., Lord and Lady Longstreet, who donate everything to their charity, the Fargo Foundation. Zoltán is their German shepherd whom they adopted in The Tombs, 4. Eunice Fargo is Sam’s mom and runs a charter boat operation in Key West.

Selma Wondrash is their researcher who seems to be developing a relationship with Lazlo Kemp, their new researcher (The Eye of Heaven, 6). Pete Jeffcoat and Wendy Corden are assistant researchers (and dating) and whizzes with Photoshop. Sandra is the flight attendant aboard their Gulfstream.

CIA
Ruben Hayward is a case officer who had trained with Sam. He has ties with Archer Worldwide Security headed up by Nicholas Archer who had also trained with Ruben and Sam.

Bree Marshall is a friend Remi made when they had the La Jolla Library fundraiser. Gerald Pickering is Bree’s uncle and a bookseller; Mr. Wickham is his Siamese cat. Larayne Pickering-Smith is Gerald’s daughter who lives in Harlowe, North Carolina. Deputy Wagner is with Cateret County.

Arizona
Professor Ian Hopkins is retired, but has an interest in pirates and privateers, partly through his studies on 16th–17th century English literature. He likes Marcellino Ristorante where Marcellino Verzino is chef and owner along with his wife, Sima, who is the greeter.

San Francisco
Sergeants Fauth and Trevino are investigators on Robbery Detail. Bryant is the on-duty manager at the Ritz-Carlton.

Port of Santos, Brazil
Captain Delgado hires his boat, Golfinho, out to the Fargos who want to dive on the Mirabel. Nuno is part of the crew. António Alves is Delgado’s nephew and will drive the Fargos. Henrique Salazar is another uncle.

Port Royal, Jamaica
Kemar works for the rental car company. Melia works at the restaurant. Jay-Jay is the bartender with some useful friends; Antwan and Billy are bikers.

Grace Herbert-Miller (she lives outside Bristol) and Harry McGregor (near Nottingham) are co-inheritors and related through a common ancestor, Sir Edmund Herbert. Meryl Walsh is the curator helped put together the Mortimer Collection for the auction.

Their family’s ancestors included…
…the Herberts descended from William the Marshall who hid the treasure. Maud de Braose was William’s daughter and Edmund Mortimer’s grandmother. Lord Edmund Mortimer had two sons: the legitimate Roger de Mortimer who had the affair with Queen Isabella, wife to King Edward II (who supposedly had the affair with Hugh Despenser, another illegitimate grandson of I don’t know who) and Sir Edmund Herbert, the illegitimate son and Grace and Harry’s ancestor. Edward III had been Isabella’s son.

Isabella got Despenser exiled. His illegitimate son, Roger Bridgeman, carried on with the new family tradition of piracy. Captain Henry Bridgeman, a slaver and pirate, alias Henry Every, commanded the Fancy in the Caribbean.

King’s Lynn
Madge Crowley, a librarian, is Grace’s cousin’s (Harry McGregor) ex-wife whose book material on King John’s lost treasure was stolen. Tour guide Nigel Ridgewell had been a history and linguistics professor. Teddy may be fierce-looking, but he’s a sweet dog.

Nottingham
Robin Hood had been known as the Wolf’s Head. Professor Cedric Aldridge is in the History department at Nottingham University. He has a retired friend suffering from forgetfulness, Professor Percival Wendorf, who has a great memory for the tunnels beneath the city. Agatha is Percy’s wife. Malcolm Swift has a similar knowledge.

Charles Avery is a corporate raider whose family history includes piracy. Colin Fisk is his ruthless head of security. Martin Edwards is Avery’s CFO. Suzette is Avery’s “client”. Winton Page is his divorce attorney. Alexandra is the wife seeking a divorce. Kipp Rogers is her hired PI.

Jakob “Jak” Stanislav, Marlowe, Ivan is trigger-happy, Lorenzo screwed up, Victor, and Rogen are all thugs.

Robert Tiptoft, the third Baron Tiptoft, was thought to have found the treasure.

The cover is the deep blue of the ocean depths with Sam and Remi diving a treasure broken open on rocks, as sharks circle. The authors’ names and series information are in white, although Cussler’s is huge, embossed, and outlined in gold. The title is at the bottom, embossed in gold with a white outline with the series info at the very bottom.

The title is to the point, he’s a Pirate from a family of ’em.