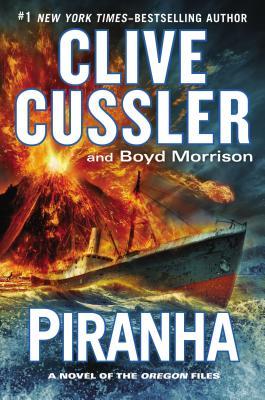 In 1902, the volcano Mt. Pelée erupts on the island of Martinique, wiping out an entire city of thirty thousand—and sinking a ship carrying a German scientist on the verge of an astonishing breakthrough. More than a century later, Juan Cabrillo will have to deal with that scientist’s legacy.

During a covert operation, Cabrillo and the crew meticulously fake the sinking of the Oregon—but when an unknown adversary tracks them down despite their planning and attempts to assassinate them, Cabrillo and his team struggle to fight back against an enemy who seems to be able to anticipate their every move. They discover that a traitorous American weapons designer has completed the German scientist’s work, and now wields extraordinary power, sending the Oregon on a race against time to stop an attack that could lead to one man ruling over the largest empire the world has ever known.

Tenth in the Oregon Files suspense series and revolving around Juan Cabrillo and his team — the Corporation.

I love the Oregon. It’s deceptive appearance is so very clever, and the contrast with its interior is amazing. Of course, I am a gadget nut, so I love all the fun weapons and vehicles they have aboard as well. Then there’s its mission. Another astute ploy to put eyes-and-ears in any port.

Their opening mission in Piranha is so clever! Simple and extremely effective in theory. Unfortunately, the enemy is omnipotent. And it’s terrifying what and where the Doctor can go, what he can see, hear, and take. I suspect it’s my own terror at how easily the Doctor can penetrate anything, anywhere, any time that left me feeling flat about Piranha. I was so busy being afraid that I couldn’t enjoy the action as much.

I had planned on giving Piranha a “4”, but in writing this review, I realized how wrong I was. It really is a brilliant premise Cussler and Morrison have created, and I can only pray it never does become a reality.

I can sympathize with the Doctor. The powers-that-be aren’t doing what they could to fix the planet and solve crime, war, famine, pollution, disease, and energy and water shortages. All of which sounds to me as if he wants to help people as well as the planet, but the Doctor is deluding himself if he thinks his way is so much better. He certainly isn’t too concerned about the poor and the disadvantaged. He’s using drug money, enabling stolen military tech sales, and permitting the destruction of ships’ crews and his own teammates. It’s that background about him and his love for online role-playing games that tell the truth. And yet another example of how brain smarts don’t translate into self-awareness.

The Oregon has a problem, and it needs to disappear, to die. There are too many rumors spreading about a ghost ship bristling with weapons. And this mission to discover if the Venezuelans are supplying arms to the North Koreans provides the ideal opportunity to do so.

It’s an op whose files will prove to be a breadcrumb to yet another plot of destruction, and yet another. But not before the mass assassination attack in Jamaica.

The Corporation was created…

…to stop terrorists and assassins. They’re mercenaries with a code of honor. Their home base and transport is the Oregon, a bristling state-of-the art tramp freighter with its own moon pool, submarines, mega-weapons, and a team of experts who can turn their hand to most anything. The Washington was her sister ship and scheduled for the scrap yard.

The captain is Juan Cabrillo, a.k.a., Buck Holland, Chairman of the Corporation. Max Hanley is the chief engineer and president of the Corporation. The massive Linc is a former Navy SEAL. Kevin Nixon is a Hollywood makeup artist and costumer. Linda is a Navy vet and former Pentagon staffer who is now vice president of operations. The Cajun, Marion MacDougal “MacD” Lawless, a former Army Ranger, and the gorgeous Mike Trono, a former elite pararescue jumper for the Air Force, are gundogs. Hali Kasim is the communications officer. Eddie Seng is director of shore operations, a.k.a., Gao Wang-shu. Maurice is the chief steward who takes excellent care of the crew and Juan. Dr. Julia Huxley, a former U.S. Navy doctor, is the medical officer. Eric Stone had worked in the Navy in research and development and is now the Oregon‘s helmsman. Mark Murphy is an arms development genius with a Ph.D. from MIT and is the ship’s weapons officer with a love for skateboarding. Both are computer experts. George “Gomez” Adams is the helicopter pilot and drone operator. Tiny Gunderson is their fixed-wing pilot. One of their latest weapons is a land-based version of the Oregon, nicknamed PIG.

Washington D.C.
Vice-president James Sandeker was once the head of NUMA. Langston Overholt is the Corporation’s CIA contact. St. Julien Perlmutter is a maritime expert with an exhaustive library of naval history. Fritz is his beagle.

Gordian Engineering is doing the forensic investigation of the Chesapeake Bay disaster with Dr. Tyler Locke in charge. Grant Westfield is their top electrical engineer; he’s also renowned as The Burn.

9 months ago, Chesapeake Bay was…
…the site of a drone test. Frederick Weddell is an electrical engineer who is the Air Force’s top communications specialist; Lawrence Kensit is a brilliant computer scientist and physicist; and, Douglas Pearson is a hardware designer with strong opinions.

Jamaica
Captain Craig Reed commands the Cast Away and uses her for fishing charters. Colin Porter is a friend and the captain of the Oceanaire. Bill Musgrave owns Atlas Salvage which is based in Kingston.

Martinique
1902: Ellery Scott is the first officer aboard the SS Roraima, and George Muggah is its captain. Mr. Havers is the third mate. Taylor and Quashey are some of the sailors. Gunther Lutzen is a German passenger with a fascination for photography who has almost gotten his doctorate in physics. Ingrid Lutzen is his sister in New York City. Monsieur Plessoneau is the agent on Martinique. Captain Marino Leboffe tried to leave harbor but was refused permission by the harbormaster.

Puerto La Cruz
Manuel Lozada is the harbormaster for La Guanta Harbor and a reservist for the Venezuelan Navy. Gao Wang-shu, a.k.a., Fernando Wang, is a former Chinese marine who had been at the battle in Golden Buddha, 1. Captain Carlos Ortega is based in Puerto Cabello. Lieutenant Pablo Dominguez is in charge of security for the shipping operation that night.

Admiral Dayana Ruiz has her own sideline going and uses the Mariscal Sucre and its Captain Escobar to aid her plans. Captain Eduardo Garcia is in command of the Valera, and he and the Maracaibo are functioning as escort for the Reina Azul.

Cabimas Shipping is…
…owned by Ricardo Leal, and he is making noises about running for president in Venezuela. The Ciudad Bolivar is another of his ships and is captained by Maria Sandoval. Jorge is the navigator, Miguel is part of the crew, and Roberto is the helmsman.

Lake Péligre is where…
…Phase One of Sentinel is located in Haiti. The Doctor is in charge. Hector Bazin was born in Haiti and served as a servant to a wealthy family who mistreated him. David Pasquet is a former Haitian National Police SWAT officer and sniper. Jacques Duval is a deputy commander with the Haitian Police and was a fellow servant with Bazin when they were children.

Colombia
Alonzo Tallon is a drug trafficker. Sergio Portilla is his second-in-command who has gotten sloppy.

Miami
Brian Washburn, a two-times former governor of Florida, is quite conscientious about appearing to be a man of the people with an ambition to be president of the United States. Too bad he’s not as careful in his business dealings at Washburn Industries. Gary Clement was an accountant.

Berlin
Greta is a student working at the library at the Jacob and Wilhelm Grimm Center. Herr Schmidt is the librarian.

The cover is a nice complement of deep orange and blue from the fireworks in the sky over the burning ship in a rolling sea.

The title is the smallest part of this story, although their actions color it all, for they are like Piranha, eating whatever they can get their teeth into.