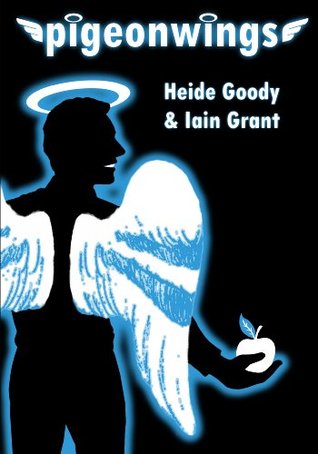 This book may be unsuitable for people under 17 years of age due to its use of sexual content, drug and alcohol use, and/or violence.
Buy on Audibles
Goodreads
Also by this author: Clovenhoof

Second in the Clovenhoof urban fantasy series revolving around the retired Lucifer, who’s now living in an apartment in Birmingham. The focus is split between the Archangel Michael and Jayne and Ben. It’s been almost two months since Clovenhoof, 1.

Pigeonwings is composed of strung-together vignettes in which Goody/Grant are poking fun at everyday aspects of human life from food to the horror of a visit home to the family to kicking over religious stories to a mother who should be put away for meanness and snobbery — no wonder her kids are warped, and to sibling rivalries with sisters desperate for men and clueless about their effect on them, oy.

Goody/Grant use third person global subjective point-of-view, if only so we can read the thoughts, emotions, and view events through the eyes of a variety of characters. Jayne and Ben have an interesting character arc in this with both learning some hard truths about themselves and each other.

That abbey has got some issues going on, and it only gets crazier the more you read. You will arrive at the truth by the end with Goody/Grant teasing you along the way, feeding those hints. Oh. Boy. I think I like the apple tree the most, lol. But . . . onion beer? As for those loaded quiches and the apple jam, ROFLMAO.

Somehow Michael has enough money to completely renovate his flat . . . including removing that horror of horrors, the toilet. Ya gotta give him points for wanting to blend in and learn how to live on earth. If only he weren’t so cluelessly full of himself! I can sympathize with his desire to redecorate the church, improve parishioner’s fashion sense, and the truth about St Michael.

He’s learning all about human life: the need to eat — he is not convinced about angel cake, dealing with unpleasant secretions, and his “thing”. Oh, lord, his obsession with that last and his cluelessness in what one does NOT do, show, or speak of is such a crack-up. Michael does have that entitlement thing going, his plans to apply for a job as Prime Minister, a captain of industry, Secretary General of the UN, etc. He’s also obsessed with the idea that he’s been sent to earth for a reason, that somehow he must obtain pardon for what he’s done.

It is fun to watch Michael go for the gadgets (a pleasure I understand, call me GadgetGirl, lol,) only he’s much better at it. It’s also a point of subconscious oneupmanship he has with Clovenhoof, *more laughter*.

Clovenhoof has gotten hold of Aunt Molly’s cellphone and is wreaking havoc with her contacts. In spite of his crude antics, he does seem to be developing some bit of conscience . . . Oh, lordy, the lengths to which Nerys’ neighbors go to, to keep her from selling her apartment, ROFLMAO.

“Men are closed books until you check them out of the library, my dear. It’s only when you take them home that you find out what secrets lie between their pages.”

The fossilized Abbot Ambrose who can’t let loose and stay at the abbey. Who’s gonna know? The effects of “enhanced” foods that send the WI on a spree, Clovenhoof’s instigations, the sex, the wedding, the paintball stag party, the museum trip, and the stereotypes of British customer service, lol, will keep you laughing.

This story is perfect for those who get a kick out of farts and poop jokes,

Its days in a life on earth as Michael attempts to blend in, even as he hopes to gain His forgiveness and take him back into the Celestial City. Please!

Luckily Michael has such helpful neighbors and meets new friends willing to help relieve him of his money.

The Archangel Michael is the new tenant in the building (the apartment had been Mrs Astrakhan‘s) and keeps a journal. Little G is the teddy bear he bonds with. Ya gotta feel sorry for a guy who cries himself to sleep. G-sez is an app Michael created.

Michael’s neighbors in Sutton Coldfield, Birmingham, England
Jeremy Clovenhoof, a.k.a. Lucifer or the Adversary or Kaa, is still red with horns and his hooves, but most people seem him as a handsome, slightly over-the-hill guy. He’s working, oh boy, for a funeral director. Manpreet is Clovenhoof’s supervisor. Mr Waddington is a client who may get a gobstopper in his cheeks.

Ben “Baghera” Kitchen, a neighbor, has few social graces and runs a secondhand bookstore, Books ‘n’ Bobs. His hobby is wargaming. The nagging Pam and the war-obsessed and boring Tony Kitchen are his parents.

Nerys Thomas is another neighbor in the building with an apartment she inherited from her aunt Molly as well as Twinkle, the Yorkshire terrier she also inherited from her aunt. She works at the Helping Hand Job Agency. Her sisters include Catherine who’s married to a footballer. The divining Lydia and the conniving Jayne who still live at home.

The Reverend Zack Purdey is the rector of St Michael’s Church. Gladys is missing a cat. Darren “Baloo” Pottersmore, once known as Pitspawn, a gaming friend of Ben’s, volunteers at the church, helping with the cub pack. Angela is the missing Akela of the evil cub pack of whom the villainous Spartacus Wilson is the leader. More members include PJ, Kenzie, and Jefri. Stephanie is another child. Andy also volunteers and works out at the gym.

The Boldmere Oak is a favorite tavern for Clovenhook, Nerys, and Ben. Lennox is the all-seeing barman. Mistress Verthandi does tarot readings. Karl is one of the guys who, um, mistakes Jayne’s and Nerys’ nightclubbing get-ups. Donna and Lotta are transvestites. It’s a sad tale about Elizabeth Siddal, Rossetti’s wife who posed precariously. Friends in Molly’s Contacts include Averill, Mavis, and Cybil. Elk Davis is a scamming spirit guide. Argyll is a wargaming friend of Ben’s. Chad is a paintball instructor. The appalling Opal is in charge at the spa.

Nerys’ family lives in Aberdaron with the oddest lifestyle. Mom (Agnes) and Dad (Ewan) are divorced, but Dad, who’s into ancient history and mythology, lives in a shed attached to the greenhouse at the bottom of the garden. And he works for the Food Standards Agency. Agnes is the chair of the Women’s Institute (WI).

Next door’s brilliant collie, Jessie, is my favorite character. Glyn Pettigrew is a farmer. Dylan Davies is one of the unfortunates at the pub. Owen is the boatman at Porth Meudwy. Gryff and the tractor. John Michell has his own theories about ley lines. Susan Jenkins from the Melin Morfa is lecturing at the WI. Some of those affected by honesty include the dodgy butcher, the traffic warden, and the headteacher.

St Cadfan’s Abbey is . . .
. . . on Bardsey Island, a.k.a. Avalon? Abbot Ambrose has some really weird habits. Barry is a large peacock pet of the abbot’s. Brother Arthur is the disabled prior of St Cadfan’s. Brother Sebastian is the procurator. Novice Trevor is actually Novice Stephen who fled an evening with Nerys. Brother Manfred is the refectorian with a unique approach to repairing the tapestries and a chequered history. More brothers include Gillespie and Henry.

The Celestial City is Heaven. Emma Kendall had been a friend of Ben’s when they were six. Larry Pearce had an unfortunate encounter with Jayne’s arrow. Adam and Eve had three children: Cain, Abel, and Seth.

The cover is white and blue with a black background. The blue is inside the halo and creates the body silhouette of Michael/Clovenhoof as well as the shadows in his wings and the leaf on the white apple. The white is the halo, the wings, and Michael/Clovenhoof’s teeth as well as the title and authors’ names. The title is braced on either end with flaring wings and a halo over the i‘s with the authors’ names tucked to the right of the head of the “angel”. Nothing, sigh, about the series info.

The title is the nickname Clovenhoof has given Michael, Pigeonwings.