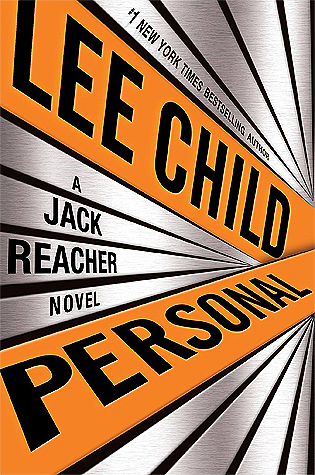 Jack Reacher walks alone. Once a go-to hard man in the US military police, now he's a drifter of no fixed abode. But the army tracks him down. Because someone has taken a long-range shot at the French president.Only one man could have done it. And Reacher is the one man who can find him.This new heartstopping, nailbiting book in Lee Child's number-one bestselling series takes Reacher across the Atlantic to Paris - and then to London. The stakes have never been higher - because this time, it's personal.

Also by this author: "High Heat", Make Me, "Small Wars", Night School, MatchUp, The Midnight Line, Past Tense, No Middle Name, The Hero, Blue Moon, "Cleaning the Gold", The Sentinel

Nineteenth in the Jack Reacher thriller series revolving around a lone wolf, retired from the army and exploring his America.

A special thanks to NetGalley and Bantam Press for allowing me to enjoy this eARC.

My Take
Child knows how to pull a reader in. Of course, “knowing” Reacher, Child already has quite a bit set up for us ahead of time, lol. I do love “listening” to Reacher make his conclusions. His questions. His curiosity. His knowledge. Although…I don’t remember Reacher thinking about the Socratic method that much in previous books. Hmmm, maybe I need to start my re-read…

It’s part of what I love about Jack Reacher (and other stories/series of this ilk) is the intelligence and observation required. That ability to make deductions from the information gleaned, and to act on it. I know how little I observe around me — even though I want to think I see a lot. Just had a thought — shocking, I know *grin* — being Jack Reacher is similar to being an editor. Reacher knows so very much about how his world works — I’m thinking about his knowledge of snipers, guns, making one’s bones, the AK-47, government identification, and more — and an editor has to know about his or her world. The one of words, sentences, plots, and more. It’s a detailed knowledge, knowing the nuances of a word being used whether it’s correct for the time period, for expressing that thought in the story. Soooo, maybe we each have our own strengths of observation, lol.

Oh, crack me up. Yep, Reacher is unconventional if only because he thinks ahead, plotting out all the angles. After all, people are people with the same motivations, dreams, plans all over the world. We’re not so different from each other. It’s also human nature when he analyzes Nice’s motives and explains the difference between CIA and military. Some very excellent points there as well. There’s that intriguing look behind the EU politics with that bit about why the Polish and Greek governments are suddenly about to have elections.

“…if it’s some big terrorist statement … it’s probably not Italy. I mean, who would notice? Those guys change every three weeks anyway.”

“…you should take that washing machine out of the yard. I don’t think it’s compulsory.”

Yep, it sure was an interesting trip out to Arkansas, and it was amazing how much information Reacher pulled out of it. Of course, Kott did leave quite a bit of information. Enough that it would knock me back a few miles. Not feet…miles, or at least 1,400 yards.

LOL, that initial beginning in Paris…interesting to see how alike these handlers were *more laughter*. It was sweet too, Reacher taking the time to see his mother’s grave.

I wish Child had said why Nice has that nasty beat-up vehicle. What was her reasoning for it? Is it simply because it’s so outside the box? Is she gonna keep it? I hope we’ll see her again in future installments. Scarangello though, I’m not keen on making her acquaintance again. I didn’t care for her comment about Reacher being as bad as Kott. I don’t get where she’s coming from, especially when she’s CIA. I’d say, right off the bat, that she’s a more likely candidate way before Reacher!

There’s a lot of back history going on in this story. The AK-47 and the reason for its creation, which makes perfect sense. And how very sensible of the government (who knew a government could be sensible??) to plan for it. The behind-the-scenes details on how a G8 conference is choreographed. The fears behind it for the players.

There was one area in which Personal was completely unlike any previous Jack Reacher story. Tell me if you pick up on it!

Wow, that ending. It was something of an anticlimax, that betrayal, I had expected something completely different, yet this made so much sense. A shocking example of truth in human nature.

And, as Bennett says, “We didn’t rule the world by being nice.” And yes, I’d enjoy reading more about this character as well, lol.

The Story
It was a long-range shot at the French president that started it. Only a few snipers in the world were skilled enough. It’s the why behind the U.S.’s concern about the attempted assassination that has Reacher curious.

It soon turns out that they want Reacher out there as bait. After all, the American sniper they suspect wants Reacher dead, so…

Then comes London and two very angry gangs, which MI5 is likely to be very pleased about.

The Characters
Jack Reacher has been retired from the army for years and spent that time roaming America, but the army hasn’t forgotten him. And Reacher realizes ruefully, that he’s much too predictable. Dominique Kohl was one of Reacher’s failures, at least in his own mind.

In North Carolina
Casey Nice is assigned through the State Department; she’s actually CIA. Antonio Luna is a very good friend of Casey’s. Joan Scarangello is also CIA, older, deputy to the deputy director of operations. She knew Joe Reacher and tries to use that.

In France
Direction Générale de la Sécurité Extérieure is the French version of the CIA.

In London
Karel Libor was a big-deal Albanian gang leader. Wallace Court is where they intend to hold the G8 conference. The Romford Boys are led by Charlie White with his lieutenants: Tommy Miller, Billy Thompson, and the real “power behind the throne”, the enforcer, Little Joey Green, a real brute of a man. He’s enough to scare Nice off her crutches. Gary is one of Little Joey’s team leaders. GCHQ (Government Communications Headquarters) is the British version of the NSA.

The suspected snipers
John Kott was originally from Arkansas and was snapped up for sniper school. He was incapable of distinguishing between real life and the battlefield. William Carson is an ex-SAS operator with 50+ kills to his name, at some incredible distances. Fyodor Datsev is the Russian, ex-KGB. Rozan is the Israeli, and the best they ever saw with a fifty-caliber Barrett.

Yevgeniy Khenkin is Sluzhba Vneshgney Razvedki, or as Yevgeniy says “KGB really, old wine, new bottles”. He was Datsev’s handler back in the day. Bennett is the English representative with an interesting character. Very stereotypical English in fact. He could be MI6, he can be anyone you want, it’s all pretty fluid at the moment, lol.

The Cover
The cover is shades of gray — how appropriate! — with a lone man standing on a deserted road leading to the Capitol building. One man facing down government.

The title is what this is for Reacher, Personal.