Over the Edge by Jonathan Kellerman
Genres: Psychological Thriller
Published by Scribner on April 23, 1987
Pages: 544
Format: eBook
Source: the library

Buy on Amazon
Goodreads
Also by this author: When the Bough Breaks, Blood Test, Time Bomb

Third in the Alex Delaware psychological thriller series set in the early 1980s and revolving around a child psychologist who helps fight crime in L.A. It’s been three years since When the Bough Breaks, 1.

It’s so weird to read about an answering service, so ya know this is in the days before answering machines.

That Mainwaring is such a jerk, all holier than thou. He’s a useful conduit for Kellerman to take a whack at psychiatrists and insurance companies. Yep, those insurance companies…they sure like to be able to quantify the bills they pay. And of course, everyone wants to be better than someone else, so those shrinks are really “doctors”, not like those wanna-be psychologists.

Cash and Whitehead are a different flavor of jerks, bigoted against gay people and quick to judge. It does provide Alex with additional insight into his own reactions to gays and into others who are thrust into categories.

It’s kind of weird. I’m editing a second edition issue that totally agrees with Sarita Flowers’ character that boredom and mediocrity threatens kids’ well-being. In Flowers’ case, she refers to geniuses, but Smith’s book, A Mother Speaks Out: Why the Halls of Ivy Crumbled, notes that this affects all children. *Laughing*, Jamey’s experience in kindergarten reminds me of one of the incidents in A Mother Speaks Out.

Hmm, I gotta agree with “Sarita” and Smith. If that Jennifer is truly an example of what a real-life genius can do with her lateral thinking and sharp analyses, we definitely need to encourage being taught-to-learn.

Poor Jamey. So incredibly brilliant, and so miserable with it. I do sympathize with his family and the schools. It is hard to deal with someone who is so far outside the norm. And yet his fellow subjects are ready to step up and help him. He’s a lucky kid in them.

“‘Oh, no,’ she said. ‘I don’t expect you to. Psych’s too imprecise a science to come up with pat answers.’

‘Does that bother you?’

‘Bother me? It’s what intrigues me about it.'”

Over the Edge is pretty heavy into psych speak along with all the talk about the medications, and it includes a short history of LSD, the research wonder drug, as well.

It’s all about family and greed with a couple of twists at the end, with all those interactions. The things people will do. Well, the things parents don’t do, like tell their kids what’s what.

It is a pip of a story that I simply had to put down every once in awhile just to catch my breath!

An incoherent call in the wee hours of the morning, sends child psychologist Alex Delaware rushing through the night to Jamey Cadmus, the patient he had failed five years before.

But by the time Alex reaches Canyon Oaks Psychiatric Hospital, Jamey is gone, surfacing a day later in the hands of the police, who believe Jamey is the infamous Lavender Slasher, a psychotic serial killer.

Wooed by a high-powered attorney to build a defense, Alex will get a chance to do what he couldn’t five years ago. And when he peers into a family’s troubled history and Jamey’s brilliant, tormented mind, the psychologist puts himself at the heart of a high-profile case.

Because Alex knows that in a realm of money, loss, and madness, something terrible pushed Jamey over the edge.

The thirty-six-year-old Dr Alex Delaware, a child psychologist, retired after events in When the Bough Breaks. Robin Castagna is his live-in girlfriend who creates fine-art musical instruments, a gorgeous woman who’s an ace with a circular saw, lol, and a studio in Venice.

The gay Jamey Cadmus is seventeen years old, a mega-genius who doesn’t do well amongst other people, and he’s gone psychotic. It’s been five years since Alex saw him. Peter had been Jamey’s bright but wild father. Margaret Norton, a.k.a., Margo Sunshine, had been a runaway from New Jersey and Jamey’s mother.

Uncle Dwight is his father’s younger brother (and Jamey’s guardian) and married to Heather Palmer. Julie is Dwight’s secretary. Colonel “Black Jack” Cadmus had been Jamey’s grandfather, and the originator of the family fortune. Antoinette had been his unwell wife. Lucy had been Antoinette’s sister.

Horace Souza is an expensive lawyer with a colorful past and had been best friends with Black Jack. Veronica is his secretary. Tully Antrim, a.k.a., William Tull Bonney, is Souza’s driver. Bradford Balch is a young lawyer in Souza’s firm. Alex is not impressed with Dr Chapin and Dr Donnell. Seymour Chereskin was a San Francisco lawyer and now a law professor at UC-Berkeley. Christopher Hauser is a lawyer with Hauser, Simpson, and Bain.

Project 160, UCLA
Dr. Sarita Flowers, a psychologist who concentrated on behavioral technology who has a preference for numbers, has been conducting a study for some years on the stereotypes of highly gifted children, bent on proving that “intensive academic stimulation of young minds” is good for them. Karen is her tenacious bulldog of an assistant. Her subjects in her AD self-control study include Andy Graves with his resigned mother. Project 160 subjects include fifteen-year-old Felicia Blocker who has already been accepted into various PhD programs; nineteen-year-old David Krohnglass has a BS and MS and is going on to med school; seventeen-year-old Jennifer Leavitt has already published three scientific papers; eighteen-year-old Joshua Marciano is about to achieve joint BAs in Russian and political science and has created a computer program for which he’s negotiating a sale to the World Bank; Jamey was kicked out; and, Gary Yamaguchi dropped out. Nothin’ says it like overachievers, lol!

Alex wonders “which would arrive first, her PhD or the completion of puberty”.

LAPD
Detective Sergeant Michael “Milo” Sturgis is in Homicide, gay, and Alex’s best friend. Since Captain Don Miller died, Milo’s life on the force has been hell. Detective Del Hardy is Milo’s occasional partner. Cyril Trapp, a born-again bigot, is his new boss. Dr Rick is in Acapulco taking a break from Milo.

Detective Richard Cash, with the Beverly Hills PD, and Calvin Whitehead, a sheriff’s homicide investigator, are teamed up with Milo to investigate the Lavender Slasher case. Officers Dixie and Desardins are at the Chandler scene; Officer Owens is in front of the 7-Eleven. Bill Sarna is a ranger with the Parks Department. Steve Pepper and Hansen are Pacific Division rookies who surf and scuba dive. Technical Sergeant Lenny Ginzburg runs the video equipment.

The county jail is…
…where Jamey is being held. I think Patrick Montez functions as a prison psychologist. Mark is a prisoner too young and nutso for gen pop. Deputy Sonnenschein is curious about psychology as a career. He’s also careful. Sergeant Koocher. Deputy Sims. Dr Platt is a neurologist.

The Lavender Slasher case is…
…a series of horrible murders: Ivar Digby Chancellor had been a friend of Jamey’s (and classmates with Peter in military school) and a prominent gay banker who broke from his family and started his own bank, Beverly Hills Trust. Erno Radovic, a first-class psycho and ex-cop, is his unstable bodyguard/majordomo with his own boat, Sweet Vengeance. Richard “Rusty Nails” Ford, Darrel Gonzales, Matthew Alan Higbie, Rolf Piper, John Henry Spinola, Andrew Terrence Boyle, and Rayford Antoine Bunker were more victims.

Canyon Oaks is…
…a private, very expensive nuthouse. Dr Guy Mainwaring, FACP, is the medical director of the clinic and prefers psychopharmacology to psychotherapy. He’s also testified for the defense a number of times. Mrs Andrea Vann is the head nurse on the night shift; Pat Demeter is her nasty ex-husband. Antoine is one of the orderlies. Drs Djibouti, Kline, and Bieber are also on staff. Officers Bjorstadt and Edward are some of the guards. Marthe Surtees is a private-duty nurse.

Lou Cestare is Alex’s financial manager and loves to go deep-sea fishing in his 100-foot yacht, The Incentive. Brandon is Lou’s five-year-old son who wants to be taken seriously. Ned Biondi is a writer at the Metro Desk of the Times; he has a daughter, Ann Marie, who just started grad school. Mal Worthy is a Beverly Hills divorce lawyer with whom Alex has worked. Rosa and her cook make some fabulous Mexican food at Rosa’s Mexican Cuisine. Jackie works as a bodyguard to Billy Orleans, a rock-n roll guitarist, who adores Robin’s work. Billy knows Rolly O, a.k.a., Roland Oberheim, a former bassist with Big Blue Nirvana, and Rolly O spent a lot of time in Haight Ashbury. Skaggs is a widower and his rarely open café, Sal’s, is a reminder of his wife, Sal. He does have a ladyfriend, Alma Backman, who likes sushi.”Fat” and “Skinny” are the bikers who keep showing up. Kaltenblud was one of the Nazi scientists at Nuremburg.

Gary and his girlfriend, Slit, a.k.a., the runaway Amber Lynn Danziger, live with Richard the Rich Kid, whose daddy owns the building. Voids Will Be Voids is a trash art gallery currently displaying work by Scroto, Sally Vador Deli, and Gary. Randee Bogdan is a caterer, Catering by Randee, who lives in the same building as Gary and company. Nureyev and Baryshnikov are her parents’ Dobermans.

The cover has a bright royal blue background with a pale silver banner across the top with an info blurb in the same royal blue. The author’s name is in an embossed pale silver with a black shadow with a tiny info blurb at the bottom right. The title is in a darker silver, also embossed and shadowed. At the very bottom in white is the series information. The graphic on the cover is also a metallic-looking silver swath of fabric with a knot in the middle, the garrote, with the length angled from upper left to lower right.

The title is the why and how of the events, for they’re Over the Edge. 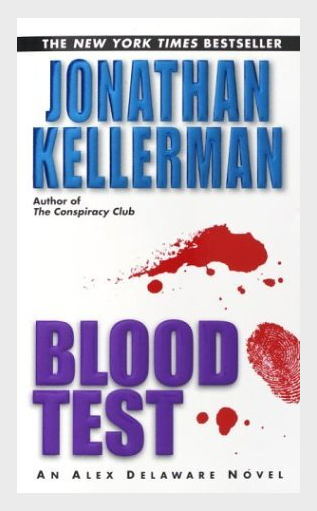 2 responses to “Book Review: Over the Edge by Jonathan Kellerman”