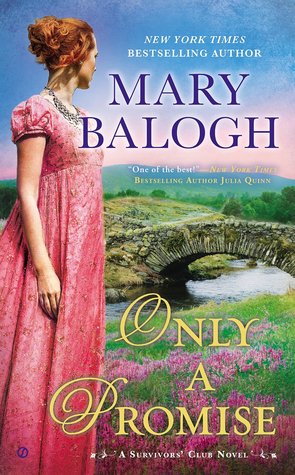 Only a Promise by Mary Balogh
Genres: Historical Romance
Published by Signet on June 9, 2015
Pages: 400
Format: eBook
Source: the library

Fifth in The Survivors’ Club historical romance series and revolving around a small group of six men and one woman who struggle with PTSD from the Napoleonic Wars. The couple focus is on Chloe Muirhead and Ralph Stockwood, the Earl of Berwick. (It is loosely connected to the Bedwyn Saga series.)

I particularly enjoyed the sense of the real in Only a Promise. Balogh may have incorporated a string of stereotypes, but stereotypes are created from repeated truths that become generalized. And their family life, reactions, and actions are very true to life.

The inciting incident is Chloe’s determination to do something about her awful life. But why she decides that Ralph is the answer to her problems confuses me, especially after her mental condemnation of him, based on her brother’s complaints.

Sure, I see why he could be the answer, but she doesn’t even like him. Nor do I have much patience with her whininess about having to go to London. Yes, it’s much sooner than she could have expected. The “demand” was delivered at a bad time. And surely she didn’t think she’d never have to go?

The primary premise for Only a Promise (and the whole series) is overcoming your fears, and I did enjoy how Balogh fed this realization from both sides. She drilled down to their anxieties and then brought them through in a realistic manner. Chloe and Ralph have their secondary issues as well — love is Ralph’s particular problem. And Balogh’s handling of his inability to love was very nice, in spite of its being such a ubiquitous meme.

Balogh uses third person dual point-of-view from Chloe’s and Ralph’s perspectives, which is why we know so much about their inner conflicts. And in the main, I adore Chloe. She’s realistic, insightful, and pro-active, a person who cares. I love that the Survivors are so protective of Chloe…that family of Ralph’s certainly needs to be handled! What a rude bunch!

Balogh relies upon a philosophical approach with both. Chloe’s is the more practical, while Ralph’s is more about happiness, honor, grief, guilt, and the obligations of privilege. There is a positive approach to youth as well with that youthful idealism and Ralph’s inbred sense of having a duty to protect people. Hmm, I should have said three, not both, for Balogh explores the concept of principles and cowardice as well.

While there is quite a bit of sad in here — Ralph’s memory of his and his friends’ laughter over breakfast brings home the loss, Balogh inserts plenty of subtle humor. Nor is Chloe the pushover Ralph had been expecting, lol, which only adds to the fun.

Life has been hard for Chloe, rejected twice by the ton, and she is not interested in spinsterhood.

It’s time that Chloe took a hand in her fate, and so she proposes to Ralph, suggesting a bargain of respect but not love.

The twenty-seven-year-old Chloe Muirhead is completely untouched and yet ineligible as far as Society is concerned. Sir Kevin Muirhead is her life’s father; Miss West, Lady Muirhead, is the mother who died. Chloe’s brother, The Reverend Graham “Gray” Muirhead, is a dedicated pacifist and a thoughtful clergyman in a very disreputable part of London. Lucy is her drama-loving, thoughtless sister who caused a scandal six years ago. Freddie Nelson is an idiot and a playwright with a high sense of the dramatic. They have two children: Jasper and Sukie. Julia, Lady Easterly, is their aunt. Clementine had been their maternal grandmother.

Ralph Stockwood, the Earl of Berwick and his grandfather’s heir, suffers the guilt of being a survivor…and of being the cause of his friends’ deaths. The Dowager Countess of Berwick is Ralph’s socially obsessed widowed mother. Amelia, the oldest sister (and Lady Harrison), and Nora, Lady Keilly, who is married to Viscount Keilly and is Ralph’s youngest sister, are the conservative ones. The middle sister, Sarah Toucher, who married the merely Mr Andy Toucher, is the rebellious one.

Manville Court is…
…the county seat of Ralph’s grandparents: the eighty-two-year-old Emily, and her great love, Edward “Ned”, Duchess and Duke of Worthingham. (The duchess had been great friends with Chloe’s grandmother and godmother to Chloe’s mother.) Great-aunt Mary, Lady Ormsby, is the duchess’ widowed sister. Caroline was their watering pot of a sister.

Bunker is the duchess’ personal maid; Bentley is the duke’s valet; Weller is the family butler; Mrs Loftus is the housekeeper; Arthur Lloyd is the duke’s secretary; and, Mavis is Mrs Loftus’ niece who becomes Chloe’s personal maid. Dr Gregg is the Worthingham family physician. Mrs Booth is the very deaf friend of the duchess. Miss Rush is a skilled seamstress. The Reverend Marlowe marries and buries.

Stockwood House is their London house where Mrs Perkins is the housekeeper and Mrs Mitchell is the cook.

The Survivors Club is…
…a core group of people who survived the horror of war and meet up for a few weeks every year to reconnect. George Crabbe, Duke of Stanbrook, has a country home, Penderris Hall, in Cornwall, where they normally meet. (George had set up his house as a hospital for wounded officers where he insisted the men be treated for more than just the physical.) His son had died in Portugal, and his wife committed suicide after this.

Hugo Emes, Baron Trentham, is married to Gwendolyn (The Proposal, 1), who is pregnant. Miss Emes is Hugo’s half-sister. (The Earl and Countess of Kilbourne are Gwen’s brother and sister-in-law while Lauren and Kit, Viscountess and Viscount Ravensberg (A Summer to Remember, 0.6), intrigue Chloe with their scandalous story. The Marquess of Attingsborough is Gwen’s cousin.)

Two Survivors who don’t appear in Only a Promise include Sir Benedict Harper who is married to Samantha (The Escape, 3) and now works for her grandfather in Wales, and Flavian Arnott, Viscount Ponsonby, who married Agnes in Only Enchanting, 4.

The blind Vincent Hunt, Viscount Darleigh, hosted the Survivors at his country home, Middlebury Park, in Only Enchanting, 4. He’s married to Sophia (The Arrangement, 2), and they recently had a baby, Thomas. Shep is Vincent’s guide dog.

The Dowager Viscountess Lyngate is a widow friend of George’s. The Earl of Ainsley is Lady Lyngate’s nephew. Lord and Lady Aidan Bedwyn (Slightly Married, 1) and the Duke and Duchess of Bewcastle (Slightly Dangerous, 6 & last) make a brief appearance.

The friends who…
…did not survive the war include Max Courtney whose sister kept in touch with Ralph. Sir Marvin Courtney had been Max’s father. Rowland Hickman had been the son of Baron Janes. Thomas Reynolds had been the son of Viscount Harding. They’ve rented a house in London with Mr Broom the butler, the newly fired thief, Jerry, and the humorous new footman.

London
Lady Angela Allandale is the daughter of the Marquess of Hitching. Viscount Gilly is one of his sons. Others whom we encounter include Lady Livermere; Baron Cornell, who is a nasty piece of work; Cedric is one of his friends; Mrs Barrington-Hayes, who is such a hypocrite; Elsie Chandler whose soirées are always pleasant; and, Prinny, er, King George IV, who appears at the ball.

The cover has a pink sunrise in the back of a pastoral landscape with a stone bridge spanning a small river and some pink flowers in a near meadow that complement the color of Chloe’s pink empire dress. Her red hair is in an updo with her head turned back to look over the view while the rest of her body is in a three-quarter profile facing the reader. I’m not quite sure why she’s wearing such an elaborate necklace while walking in the countryside. THere’s an info blurb in white to the right of Chloe’s head while the author’s name is in a deep purple with the pink of the sunset outlining the letters. The title begins around Chloe’s knees in a yellow blend of script and serif fonts. At the very bottom, in yellow, is the series information.

The title is the premise of her proposal, but to Ralph it’s Only a Promise.

4 Responses to “Book Review: Only a Promise by Mary Balogh”