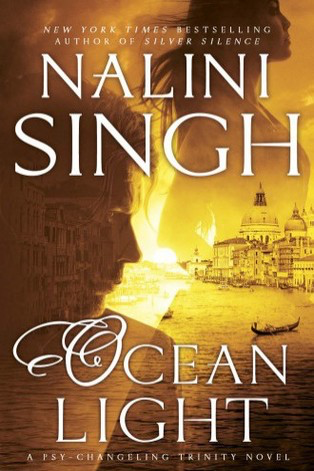 Ocean Light is a story with a wide range of conflicts. Yep, there are the story conflicts dealing with betrayal, sabotage, loss of family and/or innocence, the actions between characters, and then there are the conflicts within the individual. One has character flaws that is a set-up for betrayal while another has a childish anger that is misapplied…big time. Yet another has a phobia that erupted in childhood.

It starts off with a great hook, as Bowen tries to understand this world of the dead. Lucky for him, he’s smart. Even luckier for him, Kaia is a sensitive and compassionate woman. Through these two primary characters, Singh conveys the underlying message that there are good and bad in every (and any) segment of a population. Greed, fear, anger, a need for vengeance, but also love, caring, compassion.

Horrible things have happened to both Kaia and Bowen in their childhoods, enough to make them hate humans in Kaia’s case and Psy in Bowen’s. Yet, they both are intelligent and compassionate beings who also see the good in their enemies. But those same commonalities bring me to my whines about all this whining. Oh, that’s not fair, neither of them actually whine, but they do go on and on and on about it. That long-drawn out tease as to what happened to Bo and Cassius when they were thirteen was annoying in its slap-upside-the-head crudeness — all this lead-up and yet, when Singh finally “reveals all”, it’s flat. I should have felt something. I should have at least wanted to cry. Kaia’s late reveal of her own trauma could also have used more emotion. And I don’t mean her going on and on about her hesitation in being with Bo, which got to be irritating. As for that insta-love Bowen falls into…*eye roll*…cheesy.

I do wish Singh had played this up more, made us feel what the characters are enduring. Lord knows, George’s own traumas are horrible, but there was that lack of show again that left me uninvolved. I hate that. I suspect Singh thought that using third person dual point-of-view would be sufficient for the emotional side of the story, but…no, although that Polynesian flavor with the flower Kaia wears behind her ear and some common Hawaiian words with all that passion about family did help. And here I go…whining on about too much tell and not enough show. Now I’m annoying!

Future-wise, Singh is setting us up for Tansy’s and Seraphina’s romances. Then there’s Auntie Natia’s epigram about healing. Sounds like Singh is really spreading those Psy-Changeling wings. Another positive in the Psy-Changeling series is that warm sense of family and love throughout the different changeling groups. This is the first book that dealt very deeply with the water changelings, and they’re just as cozy as the others. A good thing, as Ocean Light felt a bit cold, mostly due to the lack of show. Lord knows there was enough going on that it should have been a hotbed of emotion, but…no. For all the drama talked about, I didn’t feel any tension until nearly the end when Bo’s “death sentence” suddenly drops to mere hours.

I did appreciate the restriction Singh set up on one of the core characters in this story that has everyone hopping around her. It creates some interesting restrictions as well as forcing characters into unexpected roles and choices. And yes, I did enjoy that ending, as Singh continues to ramp up those familial feelings.

Shot, gone, status unknown. No one knows where Bowen Knight is, whether he lives or has died, and the Human Alliance, humanity’s hope against the changelings and the Psy, is disintegrating.

And Bowen Knight has only weeks to live. Unless…

The water changelings have their own terrors, for someone is kidnapping their own, disappearing them, and it must be one of their own betraying them. Unless…

Worse, there are rumors circulating of Bowen’s true actions, evidence uncovered of his collusion, and questions about the Alliance Fleet.

Once a physician, Kaia “Siren” Luna much prefers the kitchen to the operating table. She’s a lover, not a fighter and many look to her for comfort. Hex Luna the 7th is her pet white genius mouse. She and her parents were known as the Lunatics. Dr Elenise Luna had given herself to struggling clinics all over the world while her father, Iosef, had been a lyricist, fascinated by the arts. Bebe, a turtle and Kaia’s many-greats-grandmother, is well over 230 years old.

The Human Alliance is…
…actually led by Bowen Knight, officially the security chief, while Giovanni Somme is its public head. Bowen’s Knights are his nine closest friends and compatriots and include: Lily, his younger sister in absolutely everything but blood; his best friend and second-in-command is Cassius; Heenali Roy is his third-in-command and in charge of the Alliance Fleet; Zeb will step up; Ajax; and, Domenica.

Trey Gunther is Heenali’s ex-human boyfriend. Adrian Kenner was the eighteenth century human peace negotiator who brought an end to the territorial wars. He was also an ancestor of Bowen’s. Pippi is a Psy child in Venice.

Leah and Jerard Knight are his loving parents. Toric the Destroyer was the name of Bo’s hamster. Cece is Bowen’s scary grandmother.

…the world of the water changelings based in Lantia, an undersea city in the North Atlantic Ocean; Cifica is another major city. Huh. It wasn’t until I was doing a final proof that it hit me. Lantia for Atlantic and Cifica for Pacific. Must be some kind’a climate change in their world, since Lantia doesn’t sound like it’s that cold…and the Polynesian references and Japanese names that threw me off. They are led by Miane Levèque, their First. Malachai Rhys is her second-in-command and Kaia’s cousin on the maternal side. Commander Geraldine Rhys, one of Kaia’s aunts, is to help organize the chase. Rani is a healer.

The Kahananuis are Kaia’s cousins with whom she was raised. Attie has five younger brothers with Edison, the oldest, an explorer for BlackSea; Armand, an expert in air defense, is into fashion and beauty tips, Teizo and Tevesi are submersible experts — offensive and defensive; and, Taji, an architect, is their identical third, triplets. Their parents are Drs Natia and Eijirō Suzuki Kahananui.

Mei Shei is a counselor the Kahananuis brought in to help Kaia. Tao Levèque was the original BlackSea alpha. The Ushijimas are bioluminescent Medusozoa (jellyfish…shhh). Mary Ushijima will do anything to protect her family. Leila Savea is a marine biologist who was kidnapped in Allegiance of Honor, 15.

Ryūjin Station is…
…an underwater habitat, miles below the ocean surface. The pregnant Dr Atalina “Attie” Kahananui is being distracted with her advanced experiments. She’s mated to Dexter, the commander of the station and a great white shark. George is Attie’s loner of an assistant.

Tansy, the horticulturalist working on another project with Attie, and Seraphina, the station second-in-command, are Kaia’s best female friends. Hugo Sorenson, Kaia’s best friend but unreliable with others, has uncovered damning evidence against the Human Alliance. Filipe is a semi-retired handyman who is mated to Carlotta, Scott’s grandmother. Greta.

Alden is a bad-tempered walrus. Naz is an experienced cook who now makes a living as a mystery novelist. Loribeth “Lori” never stops talking. KJ is a nurse mated to a human, Lis. Mrs. Dempsey runs science club where Pania should be. Mr Dead Clams, a.k.a., Junji, warns Bowen. Bettina, Piri, and Kianmei will pitch in. The flirtatious Oleanna turns into an octopus and keeps promising to use those tentacles of hers. Kaia’s teenaged kitchen helpers include Scott Reineke, who has a bit of a limp, and Jayson Greer while Bodie is ten with ambitions for cookies.

…their minds to manipulate. Silver Mercant has been Krychek’s senior aide, and is now the coordinator of EmNet, the Emergency Response Network. She married Valentin Nikolaev in Silver Silence, 1 (16), the alpha of the StoneWater bears. Kaleb Krycheck is a an incredibly powerful telekinetic and teleporter who is married to Sahara Kyriastos (Heart of Obsidian, 12). The PsyNet is a psychic network that provides the life-giving neural feedback all Psy need to survive.

The Trinity Accord is…

…a cooperation agreement between humans, psy, and changelings (Allegiance of Honor, 15) that was initiated by Aden, the Arrow leader (Shards of Hope, 14).

…the leopard changelings based outside San Francisco. Ashaya (mated to Dorian Christensen; Hostage to Pleasure, 5) and Amara Aleine are Psy twins and scientists who have come up with a possible solution to Bo’s problem. Rina Monaghan, a leopard, reports unusual activity. Sascha Duncan, a cardinal Psy, is mated to their alpha, Lucas Hunter (Slave to Sensation, 1). Mercy, a DarkRiver Sentinel, has had her pups. She’s mated to Riley (Branded by Fire, 6). Charlie is a wolfshifter who wants to babysit.

“‘The wolves are categorically worse than cats. Yesterday, six of them sat on our lawn in wolf form and howled out a lullaby.’ Her lips twitched. ‘The babies loved it.'”

We come across Kit as a mechanic at the island airport. Rick is his boss.

…a bear clan in Russia, and one of Bowen’s cousins, Phoenix, has married into it.

…the wolf changelings, also based outside San Francisco. Hawke is their alpha (Kiss of Snow, 10).

…a shadow organization of humans, changelings, Forgotten, and Psy who want the previous status quo back, so they can continue to profit. They’ll do anything to destroy Trinity. Gianco is a go-between at the docks.

The cover is the angled and layered gilded warmth of Venice in its oranges and yellows with Bowen’s face superimposed on a row of canal-side palazzos, contemplating the shifting waters even as Kaia fades in above St Mark’s, her head high, long dark hair shifting in the breeze. A lone gondolier poles across the canal. All the text is in white with an info blurb at the top, the author’s name embossed with a shadow in the top half while the embossed and shadowed title is at the bottom with the series information below that.

The title is a pretty big hint as to the location of Ocean Light and the insight that enlightens many.