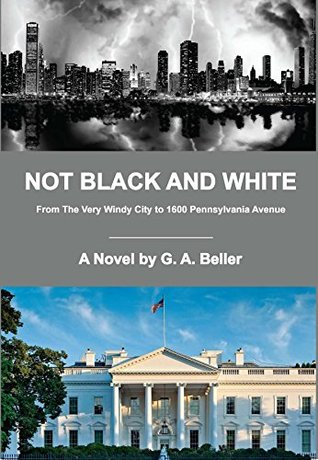 Not Black and White: From the Very Windy City to 1600 Pennsylvania by G.A. Beller
Genres: Fiction
Published by G. Anton Publishing on October 6, 2015
Pages: 311
Source: Netgalley


While it purports to be a thinly disguised memoir of Barack Obama’s rise to the White House by one of the spectators, it is actually about high-flying, corrupt politicians, donors, movers-and-shakers, and fixers. It depressed the hell out of me.

Mars is taking a look back as he recalls what led to his eventual downfall. He comes across as both decent and a jerk who wants to live the highlife and get rich using shortcuts. The African American presidential candidate in this is peripheral to the story and functions mostly as one of the politicians who benefit from the political machine that is Chicago. It’s obvious that he’s meant to be Obama, and while I don’t know much about Obama’s background, it seems pretty thin with only a few bits and pieces to tie it together.

It’s a crack-up to read about Sam’s need to appear well, and how poorly he actually lives — a 10,000-square-foot mansion, and they live in two rooms. I know it’s a truism that there are people out there who live this badly and hire in the goods for parties, so I wasn’t surprised. Just…boggled that someone would want to live like this…?? Sam’s entire mindset is that he won’t do it unless it will make him money.

The initial scandal around which the story twines (and branches out) is illegal ticket selling to fundraisers. It certainly opens it up to how the system is manipulated and used. Depressingly so. But what is so odd is how very simplistic the writing is and the one-dimensionality of the so very smarmy characters. There’s too little show, nothing beyond the networking and fixing to show that these characters have any life outside the office.

I’d expect the writing to be more intellectual instead of my having the sense of being written down to. It’s almost as if Beller expects schoolkids to be reading this. Beller does sucker punch you with how incredibly venal both the Democratic and Republican politicians are…whatever happened to “by the people, for the people”???

Anyone who’s dealt with the government knows how many hoops one has to jump through to get anything done, and Beller rams it home with all those boards that regulate every little detail of life…and want their money for your “license” along with the money you’ll spend for the lawyers and consultants and contractors and… Then there are the bribes, oops, sorry, political “contributions” over the years that hide those little “favors”.

“Politicians … discover early on in life that it is easier to stand up in front of the class and talk about nothing than it is to be a member of the class that has to do all the hard work.”

The initial scandal with the driver’s licenses appears to have been merely the hook to yank us in. The big political “crisis” in the story is when it looks like the Combine is going to be out on its ear! What I consider much more of a crisis is Sam’s speculation about “if the two-party system were just a front” … allowing … “a very select group of people to completely control the country…” It sure does seem as if that’s how things really do operate here in the U.S.

The ending was a touch satisfying with some justice, even as the “combine” kept on rolling. I did get a kick out of Beller’s, I mean, Mars’ ending statement about how this book came about. The epilogue tidies it up with a who’s where of the principal characters. And I still can’t tell which way Beller swings, for or against Obam…er, Malik.

If you enjoy reading about the ins and outs of politics and shady deals and don’t want to strain your brain, this one’s for you.

A scheme of bribery and corruption, winning at any cost, no matter who it hurts. As long as you rise to the top.

In the back rooms where the deals are made. One in which “the meteoric rise of a local charismatic street politician to become America’s first African-American president, and the downfall and imprisonment of two consecutive governors of the State of Illinois.

Marston “Mars” Gregory is a lawyer, bored with the future he saw, who attempts to stay outside the inner circle. Rochelle is the nice Jewish girl he married. Who doesn’t like Sam.

Sammar, LLC is…
…the real estate development company formed by Mars and Saidah “Sam” Alsheriti, a Syrian “billionaire” who has a degree in civil engineering and owns all the concession stands along Lake Michigan’s north side. Eloise is his wife. Bob Jacoby is the CFO. Carla is the receptionist; Lori is Mars’ secretary.

Claudia Wodecki Kovaleski will become Mars’ paralegal; she had married Stephen Kaye, a commodity trader with issues. Her business partner is Alana and they operate Trade Show Staffing. Jennifer, Allie, Charlotte (“Char“), Catharina “Smitti” Smitts, Maria, and Denise are some of the female escorts they use. Pano is one of Claudia’s favorite drivers.

The Politicians
Edward G. Parker starts the story as the Secretary of State for Illinois. In his past, he had been a U.S. Army officer and attorney general for the State of Illinois. Lillian is his wife. Skylar Stillwell is one of his brightest aides. Lisa Gronkiewicz works for the state and is having an affair with Stillwell. Ray DeRossa is chairman of the Zoning Committee. Wes Neary is the state treasurer. Janet Andersen becomes director of the Department of Planning and Development and will later become the new attorney general for the U.S.

John McKenzie, a maverick Republican, is running for the U.S. Senate. Bob and Katherine “Kate” Craig are some of his aides. Molly Brannigan, a Democrat, will run for governor, which opens up an Illinois State senate seat. The mayor of Rosemont, Joey D., is reported to be mobbed up. Brad O’Neil tried to run for office. April is his ex-wife.

The various lawyers include…
…Dan Gallagher who is a U.S. attorney based in Chicago who’s been slowing down the investigation. Monica Wicklund is a mover-and-shaker at Wicklund, Brice, and Jackson. Phil Angelino is a brilliant, high-profile real estate attorney. Ed Swinson is a good lawyer and an old classmate of Mars’. Charles Davies is a highly experienced attorney and a former top assistant to Gallagher. Jeremiah C. Marsh is Parker’s lawyer. Judge Clifford Ashworth is appealed to for warrants. Enrique Cisneros is the U.S. Attorney General.

The Republican Combine is…
…a political machine to “harvest money”. Vince “Ringmaster” Perino is a businessman who became its mastermind and is only interested in making money. Angie is his secretary. Johnny Jarzik is a political operative in Illinois, a hired gun, a mechanic, a fixer available to the highest bidder. Marvin Rosenthal began as an insurance executive.

Mishka “Mike” Kovach is the son-in-law of Walter Roche, a powerful alderman and absolute boss of one of the most important wards in Chicago. Mike is being groomed as a reform candidate for governor. Annie Kovach is Roche’s daughter and Mike’s wife. Terry Monahan is his best friend. Orenthal Mitchell is special assistant to the president of the Cook County Board; Martine is his wife. Tony Kinahan‘s father is a big contributor to the Kovach campaign. Diane and Patrick are part of the group that gets really involved in the campaign. Chuck “Chip” Faldo is an accountant who handles Mike’s finances.

Bachman Brothers is…
…a New York investment banking firm. Mario Russo is one of the principals; Stuart Golding is his senior vice president. Olivia is Russo’s executive assistant.

Boston, Massachusetts is…
…where a crusading young prosecutor, Franklin McKenzie, won cases including that of Alderman Fiochhi. Former Alderman Fiochhi. McKenzie’ll become the new U.S. attorney in Illinois. Mary Margaret is Franklin’s wife. Once in Illinois, Joshua Baker is assigned as chief investigator to Franklin McKenzie. N.J. Novak is Baker’s partner while Kelly and Reed are additional agents.

Neil was a partner in Mars’ first law firm. Carlton Fleming, a travel agent, was a client of Neil’s who kickstarted Mars’ dreams. Tony Bennet is one of the perks. Wesley Stone is head of security at Ravinia, an outdoor music venue. Wilfred Stodemeyer (Claire is his wife) is a restless sleeper with a gun. Dr. Kenneth Jensen is accommodating. Thomas Gazdik is a Chicago Tribune reporter with dreams. Abdul-Mataal Abaza is one of the world’s 100 wealthiest men and a friend of Hamad bin Khalifa Al Thani, the Emir of the State of Qatar.

Some of the corruption involves…
…the scene of the 1994 tragic accident in Waterston, Illinois, that sets events off. Juan Espinoza/Espinosa is the commercial truck driver who thought he had done what he was supposed to. Ajax Transport is/was his employer. Henry and Ruth Winters were traveling home with their six kids. Officer Joe Connor was the first officer on scene, and Officer Tim Moran was one of the cadets. Sergeant Robert Lewis is Connor’s supervisor. Jimmy Dwyer was the victim in a case Parker had prosecuted. Emil Rodriguez was even more of a victim. Dexter Dunlevy made a confession. Elizabeth Schmitter is the chief administrator and CEO at Naperville Sachs Hospital, wanting to report a shakedown. Bart Reiner is on the hospital board. Don Knollwood owns a construction company specializing in medical facilities.

I do like the cover with its “black” and “white” imagery separated by the equally sized gray rectangle through the middle. The black (at the top) is a stormy night sky over the Chicago skyline as seen from the lake while the white (at the bottom) is a bright summer day with its gorgeous blue sky over the White House. The text is all in white with that gray band as its background.

The title is a poser, and I see it as being symbolic of the gray area in which politicians seem to thrive, a gray area that is Not Black and White: From the Very Windy City to 1600 Pennsylvania.