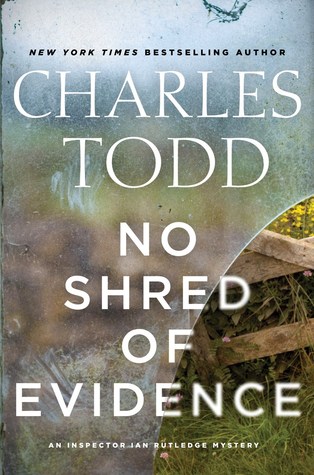 No Shred of Evidence by Charles Todd
Published by William Morrow on February 16, 2016
Pages: 336
Format: Hardcover
Source: the library

Buy on Amazon
Goodreads
Also by this author: Question of Honor, An Unwilling Accomplice, Hunting Shadows, A Pattern of Lies, A Fine Summer's Day, The Shattered Tree, Racing the Devil, A Casualty of War, The Gate Keeper, A Forgotten Place, The Black Ascot, A Divided Loyalty

Eighteenth in the Inspector Ian Rutledge historical mystery series and revolving around an inspector suffering from PTSD. This story takes place in Cornwall in the fall of 1920.

Todd jams us up in a hard twist right from the start. Four girls enjoying a last row on the river until they try to rescue a drowning man and encounter a lying witness.

I gotta say, from the start I did not like Victoria. What a selfish little snob! Her whole attitude about a man in trouble on the water was so cold. It was mean of Todd to leave us wondering for so long as to what really happened on that rowboat. She and Trevose would deserve each other.

I do have some quibbles. I don’t understand what purpose was served by Todd going on about Ian’s past cases and his past women. Why wouldn’t the police have immediately had the boat raised? I’m not sure how Major Gordon is Kate’s father if Kate is Jean’s cousin and Jean is the major’s daughter per events in A Fine Summer’s Day, 17. I don’t appreciate the “cousin” not trying to do something to stop what’s stalking her what with the evidence he’s leaving behind. And how is she supporting herself?

It’s a different world then. A class system that restricted friendships. One that treated the upper classes quite differently from the rest. Easy to see, as technically the four girls are under arrest, but their parents wield enough clout that they arrange for the girls to be held in Grenville’s custody under house arrest. The restrictions placed on women; thank god for women’s lib.

Then again our world is no different today from then. The people of 1920 revile George for his appearance, after what he suffered, fighting for his country. We forget so quickly what our soldiers suffer to protect us. What is with people?

When you think that if everyone had simply told Rutledge the whole truth when he asked for it…how many lives would have been saved. With the trouble he’s caused, and he has the gall to ask “What’s an honest man to do?” As for Victoria’s “confession”. WTF? How could she actually think she could get away with lying? As for the Saunderses. Jesus. I understand the grief they’re suffering, so why not do what you can to help the police??? Why paint lies?

There wasn’t much of Hamish in this. Is Rutledge coming to terms with his guilt?

It’s a series of nasty twists that have bound up this investigation. Red herrings. A misguided thirst for vengeance. Lies.

Inspector Barrington was the first Scotland Yard detective sent to Cornwall to investigate the murderous drowning of Harry Saunders. But that heart attack of the inspector’s got in the way. Rutledge is the second string, sent with Markham’s ill-wishes, to find it was a rescue that turns to murder for four young women. One is the woman with whom Rutledge is falling in love. Who faces prison.

Luckily their fathers are men with influence and manage to pull in Scotland Yard when the local constabulary prefer to believe the worst and want the case closed. Now.

Unluckily, the ladies’ fathers are arrogant men who don’t see why the rules should apply to them.

Scotland Yard
Sergeant Gibson is a marvel with his information network. Chief Superintendent Markham is Ian’s boss. Inspector Barrington is the first man sent to Padstow.

Heyl, Cornwall
Inspector Carstairs is investigating a murder in an alley.

Padstow, Cornwall
Constable Beddoes and Constable Pendennis (he was lied to) are based in Padstow.

Harry Saunders is the son of a banker and spent the war agitating for the Americans to step in and help. He loved sailing and had a small dinghy, the Sea Lion, for rowing out to his yacht. Mr. and Mrs. Saunders have no excuse for their statements in spite of their grief. Walter Poltruan and Sandy Wade were Harry’s friends.

Bradford Trevose, a farmer, saw the incident. Mrs. Bronwyn Penwith is his housekeeper and had been his mother’s housekeeper before that. Paul Trevose was the brother who went away to be a footman.

David Toup is the vicar with secrets at St. Marina. Mrs. Par is his housekeeper. Mrs. Daniels is the woman who will nurse him. Mr. Daniels will spend the nights at the vicarage to protect them both. The vicar seems to have had a “cousin” visiting him last summer, Frances Bingham.

Mr. Penhale owns the Pilot, a pub in the village. Dr. Carrick is the local physician. Henry Kelsey owns the boat salvage yard. Frank Dunbar lets the cottages by the river. A Terlew lad found the beaten body; his family lives at Half Acre Farm. Joseph Hays owns the inn.

Padstow Place is…
…the home of the Grenvilles. Victoria is the daughter of the house. Stephen, Elaine’s fiancé, is the brother and heir who died in the war. Mr. Grenville is the local magistrate. Mrs. Grenville has her own secrets that cause Trevose to hate the family more. The friends who are visiting include Kate Gordon, Elaine St. Ives is a local neighbor, and Sara Langley.

Major Gordon, who had been Jean’s father in A Fine Summer’s Day is now Kate’s father. Corporal Dixon is his driver. George St. Ives is Elaine’s brother returned from the war, badly damaged, and refuses to see anyone.

Fowey, Cornwall, is…
…home to the Fowey Hotel. Tolworthy is the manager. Maisy was the maid who was assigned Miss Haverford’s room. Margaret Eleanor Avery Haverford is a very secretive woman and had been a guest.

Boscastle, Cornwall, is…
…near Wadebridge. The sisters, Ronnie and Patricia, are the sheltering friends. William is Alexandra Worth‘s ex-husband. Dr. Learner is the local physician.

Dr. Fleming was the psychiatrist Ian worked with, who told him he’d have to learn to live with the voice or go mad. Mr. and Mrs. Wingate live in London.

The cover is soft with its hazy background of the river and a sharp focus in the lower right corner, peeling back as it were, of stile and field.

The title is a mockery, for there are scraps, but not enough, no proof, No Shred of Evidence.