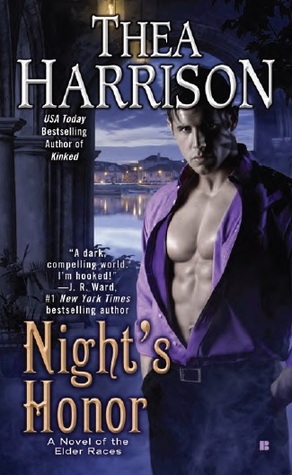 On the run from her former employer, Tess knows that she’s vulnerable on her own amongst the Elder Races. That’s why she decides to audition to become the human attendant of a powerful Vampyre of the Nightkind demesne. But while her position affords her the safety she seeks, her protector turns out to be more than she bargained for.

The right-hand man of the Nightkind King, Xavier del Torro is both terrifying and alluring. While his true nature frightens Tess, she can’t ignore the appeal of his innate sense of integrity and self-restraint. Thrown into Xavier’s world, Tess must quickly learn to navigate the dangers—both to her life and to her heart. But the biggest threat comes from her own past…

Also by this author: The Unseen

It’s a standard plot: girl desperate for help appeals to feared predator. And then Harrison twists it with the gentle “monster” and the rude Tess, who is both terrified and yet courageous in standing up for what she believes.

There’s just enough touching on Vampyres and their issues in this story to tie it into the Elder Races series; mostly, it’s about Tess facing up to her fears about Vampyres and the truth of her situation.

Harrison could have done better to build more believability in Tess’ and Xavier’s reactions to each other, but she did make a good start at it. I liked the courteous, gentle, compassionate Vampyre who could turn fearsome in less than a heartbeat versus the desperate human girl who slowly comes to realize what she’s done. She also realizes her conceptions need re-working. This is all nicely done, and it’s at this point where Harrison hurries things too much. Well, she did have only so many pages left for the story, so I guess that makes up for it…*eye roll*…

Tess may have the IQ, but she’s definitely lacking an EQ. She wants her cake, but doesn’t want to have to eat it. She wants that protection from Xavier, but she’s barely willing to appreciate the safety for which she struggled. She’s rude, reluctant, and belligerent while using everyone on the del Torro estate, although to be fair, she does acknowledge when she realizes she’s in the wrong.There were some other revelations in here that gave Tess that ah-hah moment about her fellow attendants: the meal after she surprises Raoul and the breakfast after the alley are the ones that stand out. Xavier, of course, has been surprising her from the start.

I love this description!

“If Xavier was a painting by Monet, nuanced and elegant, then she was a picture drawn in crayon by an angry kindergartner.”

Events crop up throughout Night’s Honor that remind us that there are always two sides to any tale. I was with Tess in her horror of how the candidates were treated on the stage, and Xavier’s response to Tess was brilliant. And very true. Something we need to keep in mind in our own real-world lives. That first introduction to Xavier’s estate and Raoul.…well, it’s interesting to see that scene from both sides, lol. And both have good points.

It’s Haley’s strut that makes Xavier’s comment later about the blood offering losing its meaning as a ritual so much more intense.

Nah, that scene with the too-hot bedroom and the window was stupid, but I did like Xavier’s reaction to it! VERY unexpected. Another stupid scene was the betrayal. Okay, I can understand the frustration about the character’s situation, but I cannot believe this character could have been around Vampyres this long and not realize what that money really meant. Duh.

Nice way to introduce Vampyre etiquette without turning it into an info dump! Nice creative thinking. Of course, that’s my perspective on it. Harrison probably had her own reasons for it, yet it does make a good lesson for other writers. Gave me the chills when Harrison paralleled the Christian belief in the body of life with Xavier’s appreciation of blood as life.

I love it! Harrison describes the current mode of dancing as being “like watching a school of fish smacking their fins in shallow water”, and she’s so right, lol. I much prefer ballroom dancing with a partner! Then there’s the positive image Tess finally gains…lol…oh, yes! It’s a good ‘un and easily remembered.

A little awkward in places, a little naive in others, and events resolve much too easily, and yet a nice bit of psychological insight with a lovely scene of love poetry that really fit well. It’s a love story that focuses on the inner person, and not how they look.

“I love, therefore I truly live.”

Desperate to live, Tess has only one option: submit herself into a Vampyre’s protection.

talented and intelligent Tess Graham is terrified and fearsome in herself with a strong sense of what’s right.

Xavier del Torro has a well-earned reputation for ferocity and skill in battle and as a hunter. He’s also Julian’s right hand man. Felipe was his older brother and the heir; his 13-year-old sister, Aeliana, became his mother. She married Inigo, a gentle Vampyre.

Del Torro’s attendants
In his Marin County home, Jordan is the cook; Angelica is the housekeeper (she and Jordan have their own assistants, Enrique and Peter); Raoul is in charge of security and training; Diego assists with security, takes care of the vehicles, and maintains the pool; and, his pool of attendants include Marc, Scott, Brian, Jeremy, and Aaron.

In his San Francisco townhouse, Russell is his property manager, Eduardo is the cook, Foster is his secretary, Sergio, Jaime, Sidney, Ciaran, and Mika are more attendants.

Julian Regillus is the Nightkind king and Xavier’s sire; he had been a general under Emperor Hadrian. He’s based in a massive Norman-style castle, Evenfall, in Marin in California. Carling was his sire, but he exiled her in Serpent’s Kiss, 3. Gavin, a.k.a., Opie, is the head of Julian’s IT. Of the Nightkind council, Marged and Dominic are the most compliant, and Darius (turned during the decline of the Roman Empire) and Justine (she was turned in the “violent, shadowy beginnings of Britannia”) are the most ambitious. Yolanthe is one of the guards.

Light Fae
Tatiana is their queen; she’s also the head of a major motion picture studio, Northern Lights Studios. Melisande Aindris is her eldest daughter and acts in her movies; she had had a fling in the 1990s with Julian. Bailey is Melly’s sister.

The Djinn
Malphas, a pariah exiled by the Djinn, runs a gambling operation in Las Vegas and employed Tess.
Soren is the head of the Elder tribunal. Both are first-generation Djinn and too powerful to take on.

Eathan Jackson was the spoiled son of Senator Paul (or Ryan??) Jackson. Dragos gets a mention.

The Vampyre’s Ball is an annual event in San Francisco where potential candidates can “audition” as attendants for Vampyres. Haley seemed rather desperate to be chosen, while Roberto Sanchez has better reason for his desperation. The Elder Races are Elves, Vampyres, shapeshifters, and Djinn. Brodifacoum is an anticoagulant.

The cover is purples of a night sky with Xavier posed, his lilac shirt open to the waist baring some impressive pecs, his beautiful face with the short hair, in front of an arched window with a view looking across silent water to low, lit buildings. There’s a medieval Italian air to it. The author’s name is large and in white at the top of the cover; the book’s title is in yellow and at the base of the cover.

The title is a metaphor for describing Xavier’s moral code, a Night’s Honor. 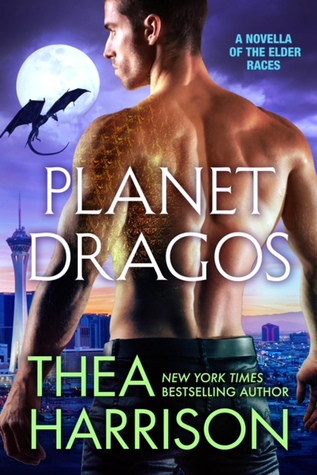 One response to “Book Review: Night’s Honor by Thea Harrison”