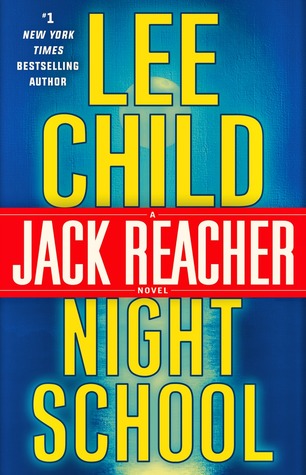 Also by this author: "High Heat", Personal, Make Me, "Small Wars", MatchUp, The Midnight Line, Past Tense, No Middle Name, The Hero, Blue Moon, "Cleaning the Gold", The Sentinel

Technically, twenty-first (publication-wise) in the Jack Reacher thriller series — with a blend of the military and spies in this one. It’s second chronologically, and revolving around a still-army M.P., Major Jack Reacher, in 1996.

Reacher has just been awarded his second Legion of Merit medal (for work he had done in the Balkans) and has twelve years of service in. One had been awarded to him in “Deep Down“, 0.75 (chronological; 16.5 publication-wise) for discovering a traitor.

And here we go with Reacher demonstrating one of the things I like so much about him, that analytical mind.

I had to laugh…all that blather about need-to-know, “even if you need a box of pencils…”, blah-blah-blah, and then there are all sorts of people brought in. Hmmm… More laughter as Jack takes advantage of the carte blanche Ratcliffe hands out.

It’s just the start of the cynicism Child, er, Reacher has for how the world actually works. The concern the terrorists exhibit for their people. The CYA by the German police. The feds “moral” concern for their lost equipment. And, lol, Reacher’s for those medals he keeps getting.

Night School had a bit of tension to it, but not as much as other Jack Reacher novels. Child did frustrate me as to who the bad guys were, for he really strung that out in one long tease.

Talk about taking me back, lol. It’s 1996, and this gang of three are talking about how the Internet could be the next big thing, the worries over what will happen to computers once the year 2000 hits…

I so appreciate it when the author gives us a hint that the characters in a scene have switched and telling the time in different parts of the world was an excellent way to indicate the switch and set up a degree of tension.

That encounter with Dremmler was a nice little subplot, and Reacher gets to display his strategic planning and fighting abilities. About the only time he does get to. And, ahem, just too embarrassing for the truth, lol.

Night School uses a third-person omniscient point-of-view, as we “hear” the thoughts of a number of characters. Yes, it is a limited number and yet way more than two characters.

I sure hope they weren’t surprised by that ending. After all, what’s a girl to do, lol?

It’s a closed operation, for the White House doesn’t want the embarrassment. Someone is selling America’s enemy something for $100 million.

For a clean close, they need the best. And one of them is Major Jack Reacher.

Major Jack Reacher is an M.P. in the army. Sergeant Frances Neagley is as bright as Reacher and one of his best friends. General? Leon Garber is Reacher’s superior.

Two other “students” include…
…Special Agent Casey Waterman with the FBI. Agent John White is with the CIA. Waterman’s help is Landry while White’s is Vanderbilt.

White House representatives
National Security Adviser Alfred Ratcliffe is the president’s go-to guy. Marian Sinclair is his senior deputy and will be in charge of this mission.

The O5 infantry commander sneaking around is Colonel Bartley. Major General Wilson T. Helmsworth gets rewarded out of proportion for his aid. IMO.

German law enforcement
Chief of Detectives Griezman wants to close out this murder fast. Muller is a deputy chief in the traffic division.

Helmut Klopp, a clerical supervisor for the Department of Sewers is an East German witness with a reputation. Dremmler imports shoes from Brazil and is the leader of a hate group. Wolfgang Schlupp works the black market.

Americans in Germany
Rob Bishop is the CIA head of station at the Hamburg consulate. Manuel Orozco is an M.P. who used to be with the 110th. Sergeant Hooper is Orozco’s some-time driver.

Private First Class Horace Wiley has been AWOL for four months. Uncle Arnold Mason, with Wiley’s mother for six years, has a farm, Gelb Baurenhof, outside Bremen. Frau Mason is his wife, and she cares for him and their handicapped son. Specialist Coleman is an E-4 and in Wiley’s unit.

The suspect has a number of aliases, including Gebhardt, Kempner, and Ernst. Bernard Durnberger and Klaus Augenthaler are wannabes, a.k.a., Billy Bob and Jimmy Lee.

A SADM is a not-so portable bomb with its own nickname. The Iranian is a double agent.

The cover is bright with the yellow author’s name and title outlined in black. The series information is white within a deep red metallic band across the middle. The background is subtle with a full moon in a dark sky beaming down on a wet road.

The title is the subterfuge, Night School.