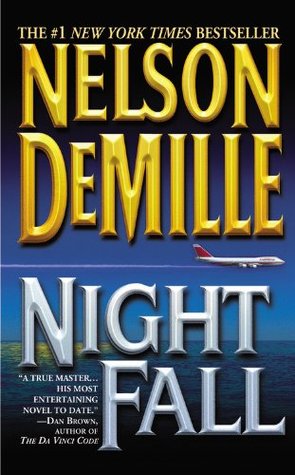 Goodreads
Also in this series: MatchUp

John Corey, a former NYPD homicide detective assigned to the Federal Anti-Terrorist Task Force in the pre-millennium 90s, makes a return appearance in a thoughtful novel offering an alternative to the government's "official" position on what really happened to TWA Flight 800, which crashed off the Long Island coast in the summer of 1996.

Accompanying his wife Kate to a memorial marking the five-year anniversary of the crash, Corey's curiosity is aroused by what appears to be a concerted effort by Kate's fellow federal agents to keep him — and her — from investigating a case that appears to be closed.

Corey's detecting skills lead him to two witnesses to the crash who were enjoying an adulterous interlude on the beach at the time the plane went down — and videotaping their sexual escapades while what appears to be a terrorist missile attack takes place in the background.

What ratchets up the tension in this capably written thriller is what the reader knows but Corey doesn't as he heads for a showdown with those responsible for the official cover-up as the clock ticks down to the morning of September 11, 2001. DeMille's deft touch with a riddle wrapped in an enigma — what really happened to Flight 800 — makes his "what if" scenario a more than plausible theory; you don't have to believe in conspiracies or government cover-ups to find his latest engrossing, entertaining, and enlightening. –Jane Adams

Third in the John Corey thriller series revolving around a maverick of an ex-cop who now works for the FBI on their Anti Terrorist Task Force. This conspiracy theory is set in New York City.

My Take
I had to plow through this one. And the only reasons I can come up with are that this was Corey up against a hard-core cover-up, and DeMille is using real-life events that still break my heart.

Emphasis is placed on the unreliability of witnesses and, in this story, DeMille emphasizes how the FBI and the CIA went on to completely ignore the similar statements of hundreds of witnesses — and at least one of them was extremely reliable! — as to what occurred that night. The CIA went so far as to create an animation that showed what the government wanted people to believe with not one witness confirming that this was how they saw events that night. If this is a true state of affairs, one has to wonder what the government was covering up. Sounds to me like the only illusions in this were the ones they were struggling to create.

It’s also an example of the brothers-in-blue supporting each other against any enemy, and continues to demonstrate that stupid territorial attitude in all agencies. I get that promotions and raises are based on how well you do, and it’s just sad that doing the best job of investigating crimes along with justice seem to be less important than who gets the credit. God forbid anyone should share information across agency lines.

When I’m not thinking of the disaster, I am enjoying Corey’s snark. His wife’s attitude? Not so much. She wants Corey to look into this, but she can’t leave that FBI-tude at the office, and it drives me nuts. I am so grateful I don’t have to work in an office!

Whew, Kate’s got a good point about Corey’s attitude about her and Nash.

DeMille is heavyhanded in the forecast area, and I struggled hard to ignore it. I didn’t want it to end there. DeMille was very good at keeping me guessing, probably because, again, I didn’t want to go there. And he has left me wondering. That was a brilliant last line for Night Fall to end on. Jesus.

The Story
They say curiosity killed the cat, and it can kill a career as well. But Kate sets her husband, John, on the trail of the truth behind Flight TWA-800’s demise. A trail that ends in punishment missions for both, a mass of obfuscation and outright denial, and threats.

The Characters
Detective John Corey, formerly of the NYPD, is now working for the Federal Anti-Terrorist Task Force (ATTF) alongside his second wife, Kate Mayfield, an FBI agent and lawyer. He also teaches criminal law at John Jay College. Robin, also a lawyer, is his first wife. Detective Dom Fanelli was Corey’s partner at NYPD and is still his best friend.

The Dick Kearns cop side of ATTF
Dick Kearns was a homicide cop like Corey; they both retired from NYPD and now work at the ATTF as contract agents. Captain David Stein is Corey’s immediate boss. Henry Muller is Corey’s cubicle mate.

Patrolman Alvarez is a promising cop and one of those doing escort duty that morning.

The FBI side of ATTF
Special Agent Liam Griffith has a lot to learn about psychological approach, especially when it comes to John Corey. Special Agent-in-Charge Jack Koenig is Stein’s boss. Jennifer Lupo is Kate’s cubicle mate.

The jerky CIA agent, Ted Nash, is dead. Which Corey still can’t get over, as he chortles with glee. Sidney R. Siben was an investigator with the National Transportation Safety Board who firmly believes in the government version. Sort of. Marie Gubitosi Lentini was one of the NYPD cops who interviewed witnesses.

Bud Mitchell and Jill Winslow are the illicit lovers who inadvertently film the entire disaster. Arlene is his wife; Martin is her husband. Sergeant Roberts is at the Old Brookville police department. Captain Tom Spruck is a former naval officer who flew F-4 Phantoms and was out that night sailing on the waters.

The Bayview Hotel
Lucita Gonzalez Perez and Roxanne Scarangello are some of the cleaning ladies; Mrs. Morales is the head housekeeper. Leslie Rosenthal is the hotel manager who likes his records. Susan Corva is his assistant. Peter is the current day desk clerk; Christopher Brock was the day clerk back in 1996.

TWA Flight 800 was a terrorist attack that killed 230 people in 1996. FIRO stands for the Flight 800 Independent Researchers Organization which exists to debunk the cover-up.

Special Agent John O’Neill was kicked out of Yemen by the U.S. ambassador for trying too hard to find the truth about the U.S.S. Cole. Colonel Anzi was the head of the Yemeni Intelligence service.

The Cover
The cover is dark as suits the night it all began as Flight TWA-800 cruises on a level plane over the ocean and Long Island. The author’s name is in white and the title in silver; both are embossed.

The title is both literal and metaphor as the plane went down at Night Fall and so did our innocence.