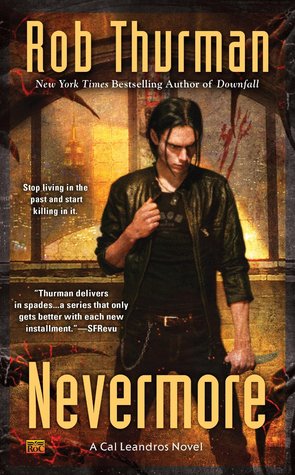 Buy on Amazon
Goodreads
Also by this author: Kicking It: These Boots are Made for Stalking

Tenth in the Cal Leandros horror/urban fantasy series and revolving around Caliban Leandros, his brother, Niko, and the comic relief of Robin Goodfellow.

I usually enjoy reading about Cal and Niko — that Robin is a crack-up. Nevermore, however, is a meandering monologue from Cal, fleeing back to the past to save Robin and Niko from a killer with the first chunk of the story totally confusing. There is also a lot of comparison between the two Cals and Older-Cal’s memories, of the conflicts the younger Niko and Robin have between the two Cals, and the worry of trust. We also get a repeat of the details of how awful Niko and Cal’s childhood was. If ever there was an example of a person who should never have had children!

“I grew up thinking the poverty line was something to shoot for but probably an impossible goal.”

There are a number of interesting (and some thrilling) events when Older-Cal encounters Younger-Cal. Older-Cal deals out all sorts of snark on his younger self. The point Thurman makes about how “God himself can’t change the past, but historians can.” No kidding.

Cal loves his T-shirts (and so do I, lol)! And there is quite a crop of sayings that will have you laughing. Well, if you’re okay with the gross.

“I have the mind of a genius, the heart of a poet, and the liver of an alcoholic — they’re in the three jars on my shelf.”

Oh, lol, I did enjoy Cal’s encounter with Loki who is listing all the ways he’s gonna kill Cal, and Cal is doing an Indiana Jones on him, ROFL. There’s more on Older-Cal’s worries about what to say and not to say. Things he is so tempted to tease Robin about and that he’s worried Niko might get too excited about.

There was a fascinating bit about reincarnation in here. Seems Robin, Niko, and Cal have always found each other with each of Niko and Cal’s new lives. The variety and antics were too funny. Robin partying with Buddha, although I don’t get that bit about Robin catching on before Buddha.

Oh, gross, Cal describes why it is the Auphe like to start eating a person from the feet up.

I gotta confess, I don’t see how Cal forgetting the pizzas is what allowed the bombing to happen.

Everyone knows that. I knew it intimately as everyone in my life died thanks to my one seemingly harmless mistake. I’d brought down Heaven, lifted up Hell, and set the world on fire, all due to one slip of the memory.

Caliban is a dead man. The Vigil has decided Cal has stepped out of the shadows once too often, and death is the only sentence. They plan to send a supernatural assassin into the past to take down the younger, less lethal Cal.

But then the Vigil makes a mistake. That one last attempt on Caliban’s life that destroyed everyone and everything he cares about. Now, Cal has to save himself, warn those closest to him, and kill every Vigil bastard who stole his world. But if he fails, he and everyone in his life will be history…

Twenty-six-year-old Caliban “Cal” Leandros is half Auphe and half-human; he and his older brother, Niko who lives for knowledge, especially mythology, are both Rom. Younger-Cal is eighteen in Nevermore, and it’s been two-and-a-half years since he escaped Tumulus. Robin Goodfellow is a puck, Trickster First, now that his father is dead. He’s oversexed, too wealthy for words, and their best friend. He’s also been alive for over a million years. Promise is Niko’s vampire girlfriend.

The Auphe are, er, were…
…the nastiest things in the universe. They stole Cal when he was fourteen, and he was trapped and tortured by them in Tumulus, the Auphe hell, for two years. Grimm is another half Auphe with plans to destroy the world.

The Vigil is…
…a hidden organization that keeps humans from finding out about nohumans by killing any nonhuman who acts out in public. Project Lazarus was Vigil genetically altering a human with a mixed bag of almost 100 samples of monster blood”; the resulting Lazarus has power over shadows and lightning. Robin believes he has the blood of Tyr in him. And that’s not good.

Talley’s is a bar where Cal worked eight years ago. Meredith was a waitress then. Rafferty is the one who healed Cal. Mrs. Sheckenstein was the old lady who used to babysit Cal as a child. Conan was Robin’s driver, until he quit because of Robin’s outlandish demands. And there are several reasons why Robin is frustrated, lol. Ishiah is a peri who runs the bar. Mr. Kikiyaon, an African soul cannibal, is the doorman at Robin’s secret apartment. Thor is an alcohol-soaked idiot while Loki, the God of Chaos and Mischief, has an overinflated sense of self. Nemesis, the goddess of Revenge, is an expert on whom Robin calls.

The Namaru made the Kyntalash, a technological artifact that enables time travel. Zachary Adams had been a security guard aboard The Nomad (a slave ship built by Colonel DePry) at Pier 17, which is part of the South Street Seaport Museum. Paien is another word for supernaturals. A yee naaldlooshii gave rise to the legend skinwalker; he’s also the landlord. A balaur works the pizza stand. The Lupa are female werewolves led by Delilah, Cal’s ex-friend-with-benefits.

Skinwalkers are protectors of the people around you because, if this doesn’t cause fear in you…

“They were defending their refrigerators. … You’re part of their herd. A roaming pantry of goodies.”

The cover is golden browns with an arched basement window with a stone window well in the background, and Cal in his regulation black jeans, black T, and black leather jacket, holding a knife and confronting monsters.

The title is both a motif and a mission statement: Nevermore will Cal give up…and a warning to Robin about those sexual antics.