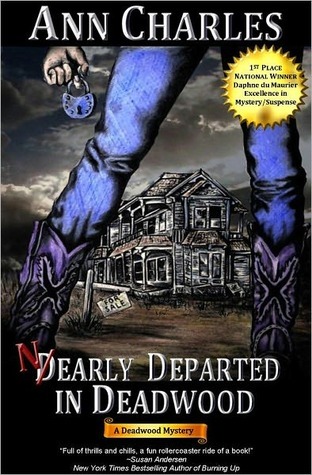 Nearly Departed in Deadwood by Ann Charles
Published by Author on January 15, 2011
Pages: 376
Format: eBook
Source: my own shelves


First in the Deadwood humorous cozy horror of a mystery series featuring a desperate single mom trying on a new career in Deadwood, South Dakota.

In 2010, Nearly Departed in Deadwood won the Daphne du Maurier Award, and in 2011 it was a RWA Golden Heart Award winner.

This is too cute. A fun read with cozy characters and quite the unique predicament for Violet! Sure, Violet has all the usual issues of a single mom, primarily the struggle to raise a pair of precocious twins, and Charles livens things up with Aunt Zoe taking them in.

Addy is a crack-up. She’s interested in earning money, but not at the expense of finding a new husband for her mom. And she ain’t shy about how she goes about it, lol.

‘Probably the one that says you need a boyfriend.’”

Violet does the typical leap-to-conclusions moves, although I do have to give Charles credit for coming up with distinctive scenarios. Harvey’s insistence on dinner with Violet, BUT not the way you think…you perv! *grin* Setting up Kelly’s dad with the football injury excuse, being a swim coach, and assigning evil deeds to him was a good one. Wolfgang was intriguing, although I don’t think Charles gave their interaction enough show. Doc, now, that was quite the confusing and frustrating set-up. I do wish Charles had been less vaguely cagey and more dropped more hints about his profession. For a while, I thought he was some kind of therapist. I suspect Charles intended Doc’s character to be the cliffhanger.

”’Exactly how many guys have you slept with?’

She grinned. ‘Deadwood is a small town. A girl gets bored.’”

Little girls are vanishing from Deadwood, South Dakota. Fearing her daughter might be next, single mom, Violet Parker, is desperate to find the monster behind the abductions and keep her job despite the malicious coworker trying to get her fired.

With her savings dwindling and just three weeks left to sell her first house or lose her Realtor job, Violet is ecstatic when a handsome jeweler hires her to sell his century-old, Victorian masterpiece, until she sees the dilapidated dwelling.

Short on time and long on worry, she refuses to give up her dream of a fresh start in Deadwood.

Now, if she could just convince her only buyer — a sexy stranger hiding skeletons in his closet — to stop rejecting vintage homes as if they’re haunted.

Violet Parker is a single mother who’s taken up a new career as a Realtor with Calamity Jane Realty. The excitable Layne and Addy, her husband-hunting daughter who wants to be a veterinarian, are her twins. They’re living with the artistic Aunt Zoe. Quint, Violet’s older brother, is a photojournalist. Her parents are on vacation in Maine. Violet doesn’t speak to her sister…with good reason.

Calamity Jane Realty is…
…owned by Jane who is on her third divorce. Mona is one of the agents and is Violet’s friend and mentor, with a sneaky angle on Ray Underhill, the sabotaging jerk in the office. Benjamin Underhill is Ray’s nephew who just completed realty school.

Willis “Old Man” Harvey is eager to sell off his ranch, but requires a dinner-once-a-week clause in the contract. Red is his fat, yellow dog. Coop is his nephew and a detective in Deadwood. The Rupps had been Violet’s clients. Wolfgang Hessler owns Hessler’s Jewelry Designs and wants to sell his mother’s house. Wilma Hessler was his scary-ass mother. Wilda Hessler is the sister who died. Dane “Doc” R. Nyce is a financial planner. Tiffany was Doc’s previous Realtor.

Kelly Wymonds is one of Addy’s friends; Johnny is her brother. Jeff Wymonds is Kelly’s football-addleded dad who works a road crew; Donna is the wife who left. Emma (one of Kelly’s friends), Tina Tucker, and Jade Newel are some of the local little girls who have gone missing as has Sherry Dobbler from Spearfish. Natalie Beals, a caretaker at a resort, has been Violet’s best friend since childhood and seems to only date losers. Claire Morgan was one of Natalie’s cousins and her family had been Violet’s next door neighbors in Rapid City. Margo runs a housecleaning service. Beatrice Geary and Mr. Stinkleshine are some of Aunt Zoe’s neighbors. Mrs. Stine works with the Deadwood Children’s Shelterhouse. Miss Plum is the young librarian.

The Buffalo Ranch is a resort outside Deadwood. People say that a murdered prostitute, Lilly Divine, haunts one of the houses. The Wild Pasque is a fancy restaurant. Fancy Fannie’s is a casino.

The black and blue cover is a terrifying cartoon-like graphic with an Addams Family-type dilapidated wooden house that would be better suited as a condemned Halloween fright house and is fronted by a dangling, ancient For Sale sign. It’s viewed between Violet’s jean-clad legs that end in purple cowboy boots, a lock dangling from her hand. The author’s name and title are in white as a western-style font with a yellow banner below the title with the series information. A gold explosion of a circle proclaims the story’s having won first place.

The title is all about Violet, who is Nearly Departed in Deadwood. I got a kick out of the deleted “D” that is replaced by the “N”.