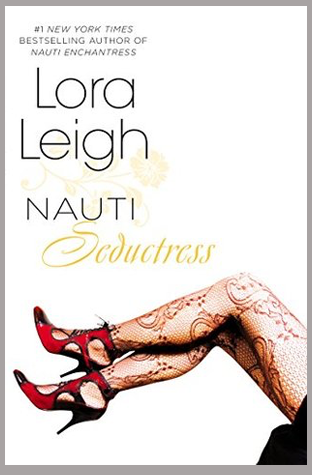 This book may be unsuitable for people under 17 years of age due to its use of sexual content, drug and alcohol use, and/or violence.
Buy on Amazon
Goodreads
Also by this author: Twin Passions, Shattered Legacy, Intense Pleasure, Knight Stalker, Enthralled, Secret Pleasure, Rule Breaker, "The One", Nauti Angel, Wake a Sleeping Tiger, Collision Point, Cross Breed, One Tough Cowboy, Hot for the Holidays, Dawn's Awakening, Strong, Silent Cowboy, "Night Hawk"

Okay, I know how I missed this one. I haven’t been at all thrilled with Leigh’s Nauti Girls series with all its melodrama, so I haven’t been keeping track. This one is somewhat better than the others in the Nauti Girls spin-off, but not by much with its combination of over-the-top melodrama (I suspect it’s using third person global subjective point-of-view that helps make it so overly overwrought). It’s certainly a level of drama that makes no sense and is essentially used to frame all the sex.

I know. You’re asking why I would read this when I’m so unimpressed. Mostly because I want to know what’s happening with Rowdy’s, Dawg’s, and Natches’ kids. Thank god I read fast, so I can get it over with.

The underlying emotional conflict throughout the Nauti Girls is Dawg’s overprotectiveness for his half-sisters combined with the slowly unveiling series arc of the matchmaking being done to marry the girls off to Homeland Security agents. The dramatic conflict keeps changing “focus” with each story, although it always centers around Homeland Security.

In this story, it’s Dawg’s concerns for the girls that make Leigh’s premise so totally out of the blue. Zoey’s too afraid to tell her big brother about her nightmare? She’s afraid of what Natches will do? Gimme a break. Where has she been the last few years?

There are plots within plots, and it doesn’t help that Leigh has some torturous sentences that leave me feeling even more confused. One example is Graham’s comment about Catalina having a girl and not a boy and Doogan refusing to touch her again. Sounds like Doogan wanted a son and…?? That entire prologue with our reliving Zoey’s attack with its focus on her having killed Harley was really confusing. If the intention was for the reader to feel as confused as Zoey…it worked. What was the reasoning why Zoey couldn’t be assured of the truth? No, no, not what Leigh says, but what would make actual sense. Leigh goes on and on and on about Doogan not knowing if Harley’s alive, and then we find out…well, you’ll have to read it, I don’t want to spoil it for you. But, it d-o-e-s   n-o-t   m-a-k-e sense. As for the number of characters who have traitorous spouses that have ruined them for any other…my god, it’s an epidemic. Oy.

It’s also annoying how Leigh suddenly drops all sorts of bits that someone in the story knew…but…no one else. I’m starting to wonder why it is so important that Homeland Security court the Mackay clan? Oh, I know Leigh claims they have a lot of influence with other “clans”, but…really?? Why doesn’t Harley reveal himself to Zoey? Why does he continue to hide? Katie’s “dramatic” last words were pretty lame. Why keep the truth about his sister from Eli? It sounds like he’s hurting more for not knowing. Why does Collin have such a hate-on for the Mackays?

I dunno why I complain. It is consistent with Leigh’s style in this series.

I am envious of Zoey’s warehouse-as-home. Of course as an artist, the place is ideal for working — I do want those window walls and the skylights! And, of course, I gotta wonder how a “woman” this young can afford to do all that she does. And how she became so successful, so young, with her paintings.

Her memories are coming back. Torturous, frightening, driving Zoey Mackay mad with fear.

Luckily for Zoe, her mystery man comes back. A man with power and the will to use it, Chatham Bromleagh Doogan is determined to make the men who drugged her and inflicted those memories pay for what they’ve done to Zoey.

But when the shadowy threat returns, will Zoey and Doogan have the strength to hold onto each other and survive the coming storm?

Zoey Mackay is the youngest half-sister to Dawg and quite the adrenaline junkie. Billy Ray and Jack Clay are stepbrothers and Zoey’s co-conspirators in her shenanigans. Lyrica is one of her three sisters and married to Graham “Brom” Brock with three-month-old twins (Nauti Enchantress, 7). Kyleene “Kye” Brock is Graham’s sister and Lyrica’s best friend. Timothy Cranston is in love with their mother, Mercedes. Eve and Piper are Zoey’s other sisters.

The extended Mackay family in Somerset, Kentucky
The overprotective Dawg Mackay is married to Christa (Nauti Nights, 2). Lakin is their daughter. Chandler Mackay had been Dawg’s and Dawg’s half-sisters’ father. Dayle Mackay and Nadine Mackay Grace were Chandler’s siblings…and lovers. Natches, a Mackay cousin, is married to Chaya (Nauti Dreams, 3). Bliss is their daughter. Rowdy, another cousin, is married to Kelly (Nauti Boy, 1) and Annette is their fifteen-year-old daughter. They still run Mackay Marine Convenience. Ray (Rowdy’s dad) and Maria (Christa’s mother) are still married.

Shane Mayes is the son of Ezekiel “Zeke” and Rogue Mayes (Nauti Deceptions, 5); Erin is their daughter. John Walker is Rogue’s brother and married to Sierra (Nauti & Wild: “Nauti Kisses”, 5.5). Lucas Mayes is a former SEAL and Zoey’s landlord.

Alex Jansen is Somerset’s chief of police, and he’s married to Janey Mackay, Natches’ little sister (Nauti Intentions, 4). Erin is their daughter. Detective Samantha “Sam” Bryce is a friend of the Mackays. Mark and Tyrell were soldiers with Alex; now they run a private security firm in Virginia.

The twins, Seth and Saul August, are Navy SEALS (and Mackay cousins) living in California. Their parents are Cade and Marley August (Marly’s Choice, 1). Seems the August obsession with multiple partners is genetic.

Homeland Security is…
…spending a heck of a lot of time in Kentucky. Elijah “Eli” Grant, Doogan’s angry brother-in-law, is the agent assigned to keep an eye on Zoey. Harley Perdue, aka, Harley Matthews, is an amazing tracker…and thought to be dead by a number of people. John David Bryce is the director of Homeland Security and Sam’s dad. Collin Westfield is the agent trying to arrest Zoey as part of his vendetta against the Mackays.

Tracker is the leader of a small band of mercenaries, and he and Grog were raised with Angel, Tracker’s second-in-command. Tigen, Black, and Forest are the leaders of the largest biker gangs using “Witchy” as the mediator between DHS and six of the biggest biker gangs in the nation.

Davis Caston is buying some of Zoey’s paintings. Dr. Jenkins is an OB/GYN. Stanley Kelly is a rather dull accountant in town.

The cover doesn’t make me think Zoey at all. It’s not in character for Zoey to be in those red paisley-like mesh stockings with the high-heeled cut-out heels in black and red. Now, I can definitely see Zoey on her back with her legs kicking up and wearing that short black skirt…as long as she can ride her Harley in it. The background for the cover is a plain white with an info blurb at the top — the text is kept tightly confined within the left side of the cover. The author’s name is in a thin font in black with the title broken into two colors and font-styles. It’s a handy way to indicate the series information. The first part is in the same thin sans-serif while the second half is a seductive script in a greenish yellow with the tip of the capital “S” swirling into a floral design behind the words above it.

The title is how Doogan feels about Zoey, his Nauti Seductress.