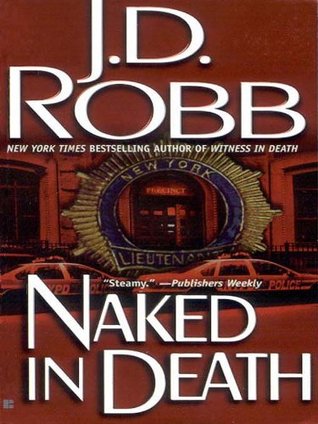 First in the In Death romantic suspense futuristic series and revolving around homicide detective Lieutenant Eve Dallas in the New York City of 2058.

After reading Robb’s short story, “Interlude in Death”, I just had to start this series. And it does NOT disappoint. I love Eve’s conflicted and very moral character while Roarke’s character combines gorgeous with considerate and a wicked sense of humor.

Oh. Wow. Robb doesn’t hesitate to jump into the nitty-gritty of murder and sex. She starts with a flashback, as Dallas remembers last night and the crazed man she had to kill after he had hacked up a toddler. It’s violent, horrendous, and compassionate all at once

Robb uses a third person global subjective point-of-view from Dallas’, Roarke’s, Summerset’s, Whitney’s, Feeney’s . . . and the list goes on, lol. So, yeah, we get the thoughts and emotions of a lot of people.

Dallas has quite the background, one which has strongly influenced her choice of career and her issues. She has a strong need to pursue justice and doesn’t care who she stomps on to get there.

Feeney’s character has his quirk with that bag of sugared nuts he carries around. Makes me want some.

This world is quite futuristic and makes me hope I can live that long, IF I could count on those AutoChefs and flying cars, that is. Although I’d have to be really rich so I can continue to enjoy real meat, real eggs, real coffee, etc. Guns and rifles that project bullets are an anachronism and exist only in private collections and museums. Hardcopy books are an anomaly!??

It’s not just the gadgets that grab me, it’s that back story of Urban Wars, that East Washington is the capitol of the country, and the old White House. I’m curious about the history of this world and how all these changes came about.

I adore Robb’s descriptions. They pull me right in — “The sun was bright as a sword but the air had the snapping bite of a petulant child”. What didn’t grab me is that attraction between Dallas and Roarke. Oh, don’t get me wrong, I’ll all for it, but the attraction was more obvious simply because Robb was telling me.

Roarke. Hubba-hubba. He’s charming, sleek, compassionate, and not afraid to stand up to anyone. Both he and Dallas are self-made people and you can’t help but admire that.

There are an interesting number of conflicts — besides Eve’s background, including the senator’s blustering, Simpson’s attitudes, Summerset’s obstructionism, and Roarke’s stubbornness.

It’s action-packed and character-driven at a reasonable pace with all the hallmarks of a murder investigation, the mystery, the suspense, the procedures that must be followed, and how it incorporates both today and the future. I love that Robb avoids info dumps and describes her world through her characters and their actions.

Naked in Death was an incredible story and makes me want to jump on Glory in Death, the second in the series.

It’s murder with all the tricky overtones of politics and high-level influences.

The driven Lieutenant Eve Dallas is the head of Homicide, desperate to protect, find justice, and ignore her beginnings. Mavis Freestone, a former grifter and con artist, is Dallas’ best friend and a screeching singer.

The NYPSD is . . .
. . . commanded by Chief Edward Simpson, a man more interested in image and politics. Commander Jack Whitney is Dallas’ boss. The protective Captain Ryan Feeney is in charge of the Electronics Detection Division. The sixty-year-old Dr Charlotte Mira is an in-demand psychiatrist and the top police profiler. Officer Banks is on the door for the Castle murder. Riley is a desk sergeant.

The determined Roarke is an enigma. No last name. A murky past. Probably the richest man in the world and absolutely gorgeous. He runs Roarke Industries which appears to own a quarter of the world and its satellites. Caro is his classy personal aide. Olympus Resort is a current project, a proposed space station purpose-built for pleasure and entertainment. Summerset is his majordomo, in charge of Roarke’s house. And Summerset hates Dallas.

Sharon DeBlass, the daughter of lawyers and the granddaughter of a senator, is a high priced licensed companion (LC), i.e. a hooker. Her lawyer parents are Richard DeBlass and Elizabeth Barrister. Her grandfather is Senator Gerald DeBlass who is pro-gun with a highly moralistic agenda. Derrick Rockman is the senator’s aide. Anna is Gerald’s wife. Sharon’s aunt, Richard’s sister, Catherine DeBlass, is a congresswoman; Justin is her patient husband. Franklin is one of Catherine’s children.

The charming Charles Monroe is one of Sharon’s neighbors and a friend. He’s also a high-end LC. Lola Star is a new LC and finally fulfilling her childhood dreams. Georgie “Granny Sex” Castle is in her fifties and recently divorced so she can pursue her research for the writing she plans to do. Eve will inherit her gray cat and name him Galahad for excellent reasons! Samantha Bennett is Georgie’s daughter; Tony is her husband.

Nadine Furst is Channel 75’s on-air ace — a journalist with morals! The Paradise is a very high-end beauty salon where Denise is a receptionist. Sebastian is Sharon’s personal consultant. Francois is a rude, snake-eyed French refugee who runs a deli. Mandy is the three-year-old at the start of the story. The Blue Squirrel is a dive where Mavis sings. Joe and Hetta Finestein are in their hundreds and have retired from their bakery business; they’re also Dallas’ neighbors. Mr Hennessy is a neighbor? the building manager?

The cover is the wall of the police precinct, a partial of arched windows on either side. The entrance is framed by a hollowed-out, enlarged police badge with “New York” at the top and “Lieutenant” at the bottom. Two police cars are passing in front of the building, going in opposite directions. The bottom fourth is the street, the entire cover tinted in that grayed-out burgundy. At the very top is the author’s name. Immediately below it (but above the badge) is an info blurb. Immediately below the badge is a testimonial. Below that is the title. All the text is in white with a black shadow.

The title references all three murders, for they were found Naked in Death.