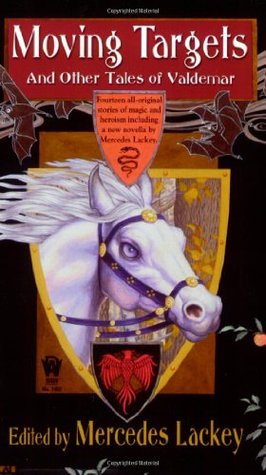 The fourth anthology in the Tales of Valdemar short stories includes 14 stories and revolves around Mercedes Lackey’s fantasy world of Valdemar.

Short Series within the Valdemar Anthologies:

Mercedes Lackey and Larry Dixon’s “Moving Targets” is cute, and I have to admit my judgment is partly influenced by the elaborately painted gypsy caravan. I want to re-organize it and try it out for myself as this trainee group heads out on a year-long circuit. I also adore Rod’s inventiveness. Once we get into the story itself, we finally get to the purpose behind the story.

It’s certainly a useful shakedown trip. In more ways than one, lol.

Nancy Asire’s “An Unexpected Guest” falls into Sweetwater and is approved by a Fire-cat. In spite of it being a scary day in the village as the “guest” is hunted by assassins, it’s actually quite sweet.

Brenda Cooper’s “The Power of Three” is an interesting experiment, and fortunately, the Collegium is willing to be flexible. A cute story of the connectedness of twins.

Janni Lee Simner’s “What Fire Is” is a sad story that will make you cry and anger you with its religious ignorance.

Mickey Zuker Reichert’s “Dreams of Mountain Clover” is sweetly terrifying if a bit juvenile. A frightened servant hopes to save her mistress and heads out on a very adventurous quest.

Richard Lee Byers’ “The Cheat” could be set anywhere and is between two fencing masters, one of whom is cheating. It’s an ingenious answer to the problem.

Kristin Schwengel’s “A Dream Deferred” is a confusion. I have no idea how the title relates to the story. That whine mentioned, I did like the story. It’s a tale of an unlikely rescue and an unlikelier partnership.

Michael Z. Williamson’s “The Sworddancer” seems to be Riga’s first exposure to guiding a party of refugees as well as to battle. It’s a brief glimpse with her romantic notions of war turned on its head. Curious, but not a favorite as there was too little information as to the whys.

Stephanie Shaver’s “Broken Bones” finds us reading of Bard Leila (Shaver has her own miniseries going with Leila) and the advice she gets on writing a song and soothing her unrequited love. Good thing Shaver told me the lesson I was supposed to learn, as I don’t think I’d’ve gotten it.

Tanya Huff’s “Live On” is a querulous trip with an old historian repeating the same stories over and over and complaining about cold, impersonal reports. But Tanis is a herald first, last, and always when he and his Companion, Verati, give their all to rescue a kidnapped girl.

Shaver could do with seeing how an experienced writer gets the point across without having to be so obvious.

Rosemary Edghill’s “Passage at Arms” follows two stories. One is of a new, young, and insecure Trainee and the other is at the other end of the age spectrum in an old servant who loves to serve the Collegium. I do like his philosophy about the students and his evenhanded approach to the anonymity. And he has a lovely story that will help young Aellele.

Gotta wonder if Edghill ever read any of Lackey’s Valdemar stories about the Companions. She’s got Companions coming back to Haven to seek rest and healing without their riders.

Sarah Hoyt and Kate Paulk’s “Heart, Home, and Hearth” is all about Jem and Ree’s finding the farm with an injured Garrard. Hoyt/Paulk milk this a bit much emotionally, but I enjoyed it.

I’ve been working my way backward through the anthologies and by the second one (that I read) I realized that Jem and Ree were a recurring short, so it was a treat to finally read this one. I’m still working my way back, and I’m curious if I’ll ever find the Ree and Jem story that is the first one.

Fiona Patton’s “Haven’s Own” is a Hektor Dann story (yep, another recurring short) that sees Hektor receiving his sergeancy and demonstrating his street smarts. I do like this short series. It’s very homey with great characters.

Judith Tarr’s “Widdershins” find Heralds Egil and Bronwen riding for days and never making any progress through the awful storms that besiege them. It’s innocuous and safe and a dance that Egil and Cynara love. It would be too easy to fall into the complacency and beauty of this dance.

A cute story with a clever twist. It’s rare to get a story about an average man, be he ever so much a Herald.

The cover is consistent and yet different from other Valdemar covers. It has the inset shield bordered in a riveted gold with a Companion’s head emerging from within, a woods in the background. The end point of the shield is covered by another shield of a red gryphon on a black background. The shield itself is backed by a rectangle of weathered leather which is all backed by the black of the cover’s background. A bordered rectangle of deep red provides a background for the title in white, and it looks like bats flying between the title and the shield. Superimposed on all this between the shield and title is yet another shield in a bright orange (or a pale red?) with a quick blurb about the contents of Moving Targets and Other Tales of Valdemar.

The title is a metaphor for each story’s protagonists. It’s really a bit of a leap on my part. All stories have a character who is that story’s center, a Moving Target for the conflicts that arise within each one.